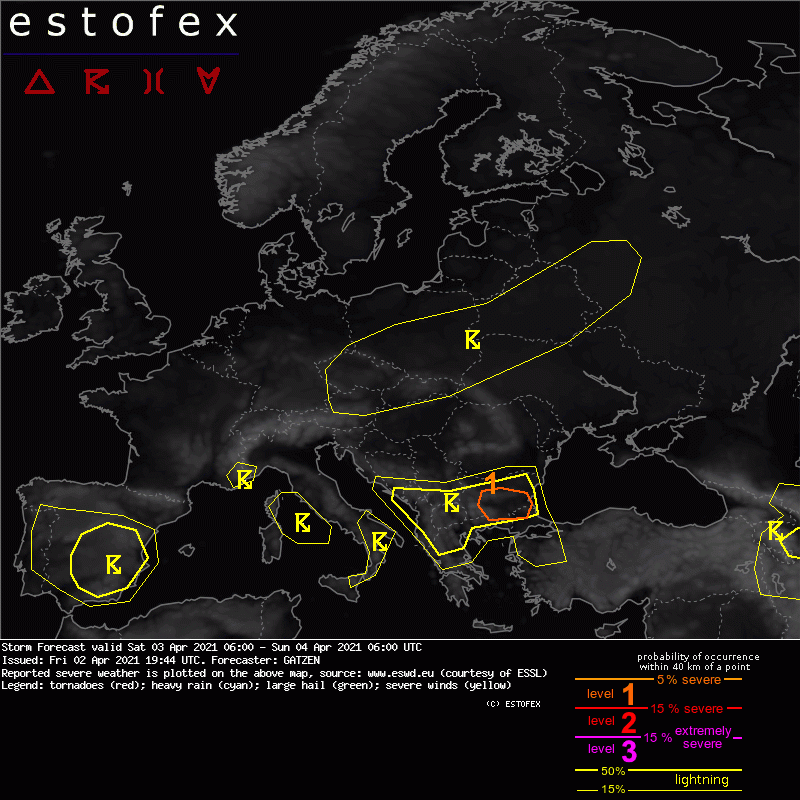 A level 1 was issued across parts of Bulgaria mainly for large hail and severe wind gusts.

Downstream of an intense North Atlantic ridge, a short-wave trough amplifies across Central Europe. Its axis crosses eastern Europe on Saturday. To the south, low geopotential affects the Mediterranean, with vort-maxima across Iberia and the west Mediterranean slowly moving east.

Cold air is spreading into eastern Europe. Although low-level moisture is limited, some weak instability is expected in response to relatively strong diurnal heating. Showers are expected to form over a widespread area. Best potential for thunderstorms is near the trough axis where the equilibrium level temperature is expected to be around -20 degree Celsius. Storms are associated with snow and graupel and will form between noon and evening before decaying in response to boundary layer cooling. Weak vertical wind shear and marginal instability do not support any severe storms, but gusty winds are possible due to strong downdraft cooling in well-mixed boundary layers.

At the tip of the approaching trough axis, a vort-max crosses the Alps during the day. Latest models indicate that weak instability will be deeper close ahead of this vort-max and that some thunderstorms can develop. Weak vertical wind shear will limit severe potential.

A cold front moves into the Balkans during the day, replacing a rather warm air mass that is slightly unstable due to steep low-level lapse rates overlapping with modest moisture. Ahead of the cold front, diurnal heating will result in thunderstorms to develop, also supported by frontal lift. Effective vertical wind shear is rather weak, and given weak CAPE, severe storms are not expected over most places. Some severe wind gusts and mariginal severe hail are not ruled out. Best potential fpr some better organized storms including supercells is forecast across Bulgaria, where models predict 10 to 15 m/s 0-3 km vertical wind shear. Large hail and severe wind gusts are forecast with these storms.

Vort-maxima affect Iberia, the Tyrrhenian Sea, and the Caucasus region. Weak CAPE is expected to develop in response to diurnal heating. Showers and thunderstorms are not forecast to be well-organized given weak vertical wind shear. Locally, some hail and wind gusts are not ruled out.