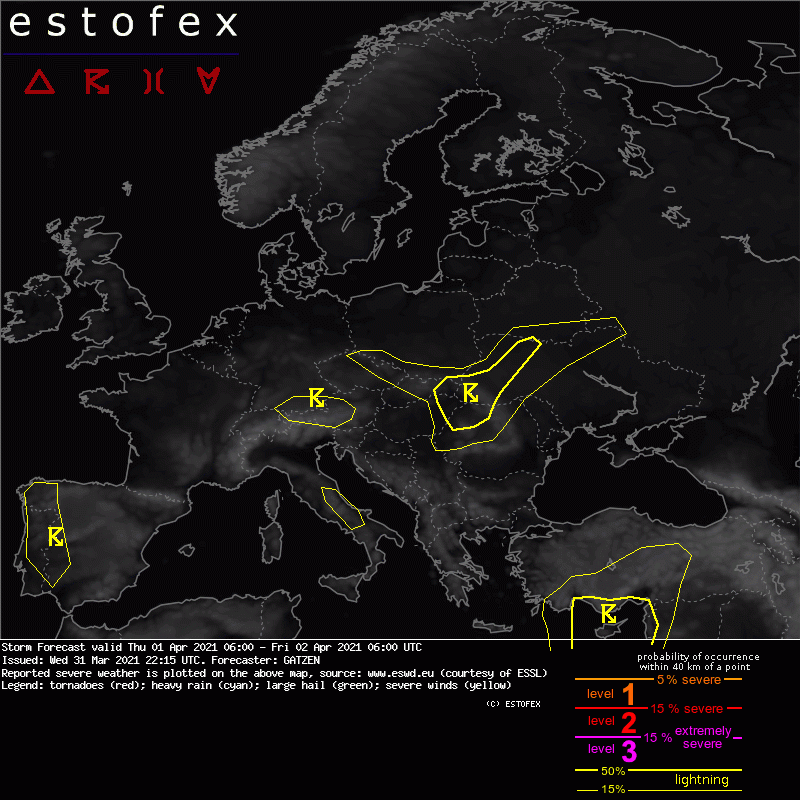 Ridging extends from the west Mediterranean towards the British Isles, with an increasing north-westerly flow evolving to the east. A short-wave trough embedded in this flow moves from the Baltic Sea to the northern Balkans. Farther south-east, another vort-max affects Turkey and the east Mediterranean. Finally, a cut-off low is situated across the west Iberian Peninsula.

East Mediterranean and parts of Turkey

Mid-level low geopotential and cold air will continue to affect the east Mediterranean. Rather steep lapse rates and moist profiles are forecast in the morning. Some diurnal heating is expected to result in weak but mostly uncapped MLCAPE, and some storms are forecast over southern Turkey. Additionally, an approaching vort-max over the Aegean Sea will provide QG forcing, supporting frontogenesis along a cold front. Thunderstorms are especially forecast to spread eastward across the east Mediterranean.

The severe potential with these storms is low. Although deep lapyer shear is strong to the east, with 0-6 km shear around 20 m/s, effective shear is limited to less than 10 m/s over most places. Some multicells are forecast to develop, and linear segments can form along the cold-frontal convection. However, given weak instability, the risk of severe wind gusts is expected to be too low for a level 1 threat.

Ahead of the approaching vort-max and cold front, a well-mixed warm air mass is present across Central Europe, characterized by steep low-level lapse rates and a rather deep boundary layer. Best potential for storms is forecast from southern Poland towards the western Ukraine, where frontal lift results in a rather moist profile with some 100 J/kg MLCAPE in the afternoon. Clusters of storms are forecast to form that spread south-east and may persist late into the night given ongoing forcing. Some hail and strong wind gusts are forecast due to the deep boundary layer and low wet-bulb freezing level despite the fact that vertical wind shear is weak and storms will not be well-organized.

The potential decreases to the east where lapse rates are weaker, and to the west where profiles are drier. An exception is the northern Alpine region where upslope flow results in a moisture profile and weak CIN. In the weakly-sheared environment, some thunderstorms are expected that slowly move south-east in the evening. Again, the low wet-bulb freezing level supports some hail events.

A moist and rather well-mixed maritime air mass enters western Iberia as a cut-off trough moves eastward. This air mass will develop some weak MLCAPE in response to diurnal heating. Showers are expected to develop, and some are forecast to produce thunder although the equilibrium-level temperature of latest model forecasts is only slightly below -20 degree. Weak vertical wind shear limits the severe potnetial with these storms.