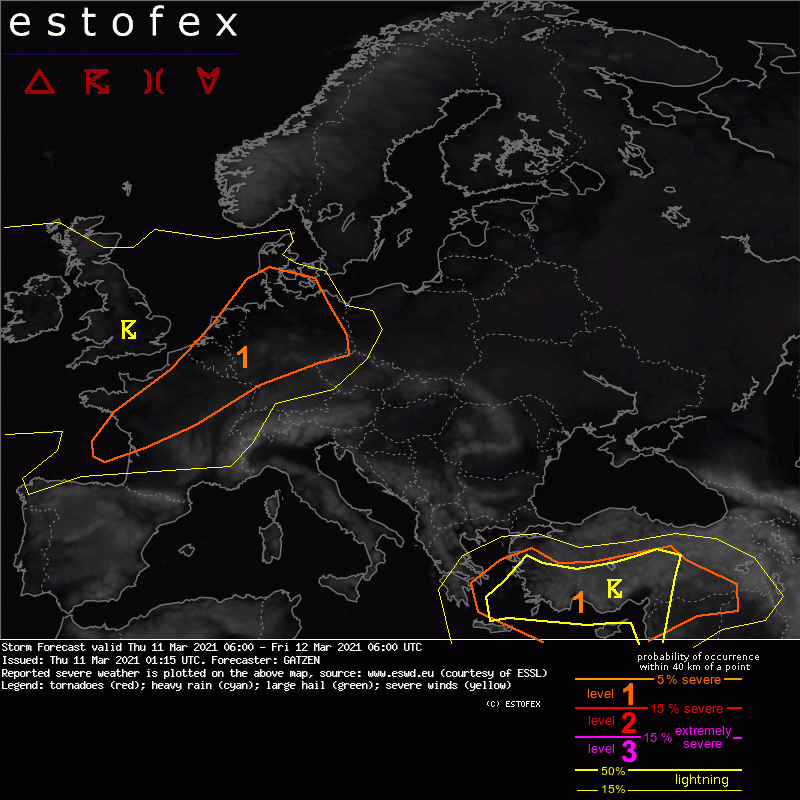 A level 1 was issued across southern Turkey into northern Syria and Iraq and across the Aegean Sea and north-east Mediterranean mainly for large hail and severe wind gusts.

A level 1 was issued across north-western France into the Benelux countries and northern and central Germany mainly for severe wind gusts.

An intense low pressure system will affect the area with strong to severe wind gusts. Some convective contribution to these gusts is expected. Main focus is the mid-level front that is associated with steep low- to mid-level lapse rates. These may even overlap with the cold front that crosses Germany during the day, so that pre-frontal moisture with dewpoints around 6Â°C can overlap with modest low-level lapse rates. Weak low-topped CAPE is not ruled out. In the wake of the cold front, further showers and thunderstorms are forecast in an slightly unstable environment.

The main limiting factor is the rather weak cold pool potential and the weak low-level convergence indicated by latest models. A well-developed narrow cold-frontal rain band is not indicated by most models, but a broken line or isolated segments of convection. Overall contribution of convective storms to the severe wind gusts occurrence is forecast to be limited for this reason.

Storms form in an environment with strong deep layer vertical wind shear. Supercells are forecast. Although CAPE is weak, these storms will have a potential to produce large hail and severe wind gusts. Some limiting factor is relatively dry air around the LFC what in combination with the strong shear can be unfavorable for initiation locally.