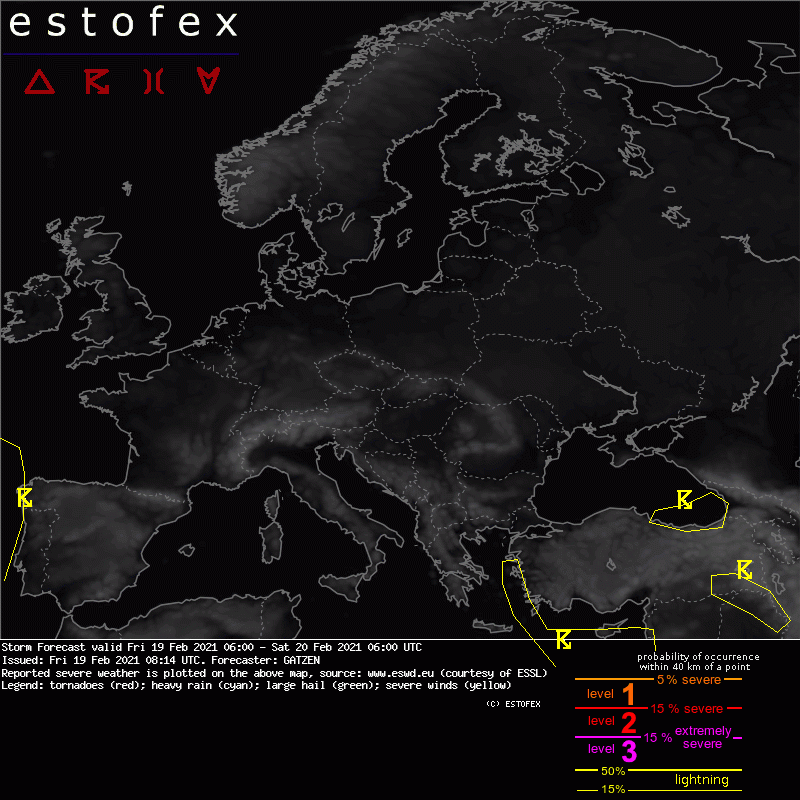 A broad subtropical ridge further amplifies across Europe. A short-wave trough curves around the ridge digging across the Balkans late in the period where it rotates aroung a large trough located across western Asia and far eastern Europe. Another trough will progress across the Black Sea with its axis crossing the east Mediterranean.

Cold and dry air across eastern Europe will limit the potential of thunderstorms despite some steep low-level lapse rates. Best potential exists over the east Mediterranean with some low-level moisture and higher ELs close to the trough axis crossing the region. Close to Turkey, dry air is advected with northerly winds and storms are not expected to form. Farther south, some showers and storms spread east towards the coasts of Lebanon. Weak vertical wind shear will result in weakly organized storms and severe weather is not expected.

At the western flank of the European ridge, a strong south-westerly flow advects subtropic air masses towards western and central Europe. A frontal boundary affects western Europe, with a cold front reaching the Iberian Peninsula late in the period. A tongue of rich moisture attached to the front will spread north west of Portugal and north-western Spain that becomes unstable in response to frontal lift and increasing lapse rates at low to mid levels. Embedded convection is expected along the frontal rain band. These may produce some severe wind gusts given strong vertical wind shear at low levels. The overall potential is expected to be weak, though, given low ELs and marginal CAPE.