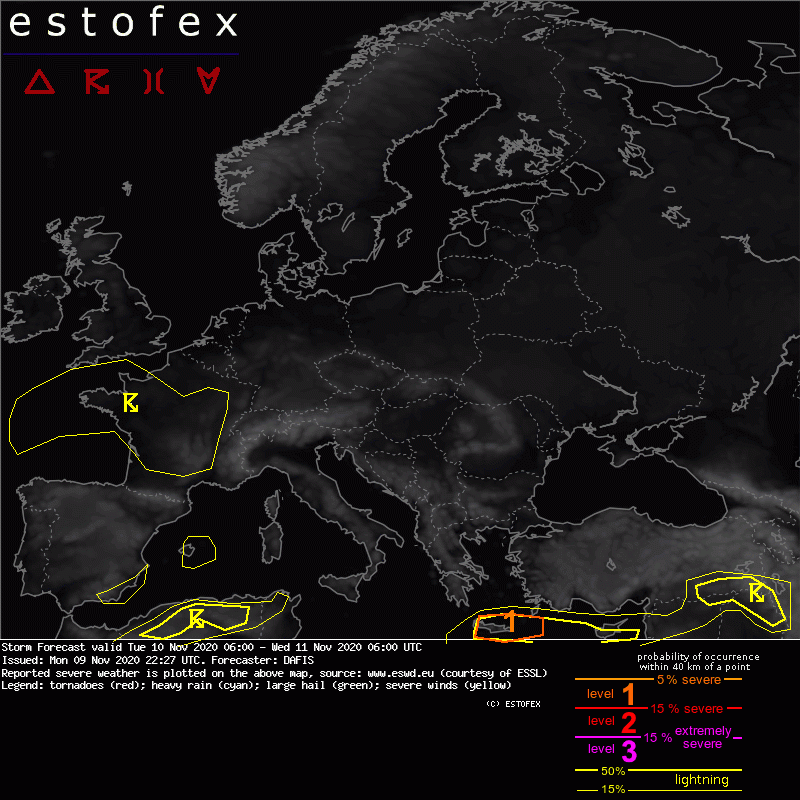 A level 1 was issued for Southern Greece mainly for excessive convective precipitation.

A long-wave trough with embedded vorticity maxima is crossing W Europe while another trough is approaching from the Atlantic. Near the surface, a high-pressure system in W Mediterranean suppresses convection due to strong large-scale subsidence. Moreover, some hundreds of CAPE above the Balearic Sea will remain capped, and DMC phenomena are forecast mostly in the mountainous areas of N Algeria where CI will be easier to achieve. A few scattered lightnings cannot be ruled out over France and the English Channel where some CAPE is expected downstream the easterly-progressing trough.

In the Eastern Mediterranean, a cut-off low south of Crete will remain out of phase with a low-level vortex that is found a few hundred kilometers to the east, and this baroclinic instability will sustain the cyclone intensity. DMC events are expected in S Greece, mostly in Crete.

A pool of warm and moist air masses lies in the Libyan and Levantine Seas where a surface cyclone has established an N-NE flow in S Greece. Thermodynamic instability is forecast to build up to 1000 J/kg over the marine areas, close to the coasts, inside the level-1 threat-area. The main threat will be excessive precipitation in Crete island due to the influx and convergence of moist air masses. Moreover, the strong mechanical ascent of the unstable air masses will contribute to the training convection that is expected to lead to flash floods. One must keep in mind that the soil is already saturated from torrential rainfall on Monday 09/11, so this aspect should be taken into account for the events on Tue 10/11.

Hail threat will be limited due to the saturated vertical profiles, the lack of significant overlap between CAPE and DLS, and low NCAPE. Also, some small hail events should only affect marine areas or high mountains in Crete. Finally, waterspouts can form close to the coasts of S Greece and S Turkey, but mesocyclonic events can be ruled out as conditions do not look favorable for supercells.