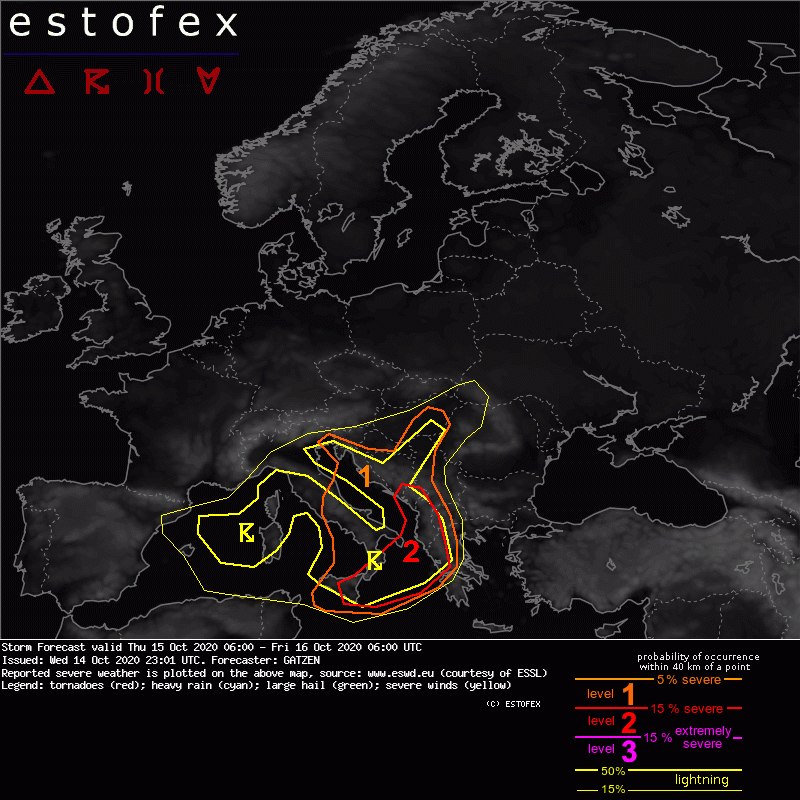 A level 2 was issued across the Ionian Sea towards southern Italy and western Greece and Albania and southern Adriatic mainly for severe wind gusts and heavy precipitation.

A level 1 was issued across the Ionian Sea, the Adriatic Sea and the southern Tyrrhenian Sea including central and southern Italy and the western Balkans mainly for severe wind gusts, heavy precipitation, large hail, and tornadoes.

A level 1 was issued across the central Balkans into Hungary mainly for large hail and severe wind gusts.

High-amplitude troughs across southern Europe will start to lift on Thursday. An intense vort-max travels across the central Mediterranean and later into the Balkans. At lower levels, a cold front crosses southern Italy and the Ionian Sea.

Ahead of the appproaching vort-max, a cold front travels east. Ahead of this front, a moist air mass is present that increasingly overlaps with steep lapse rates that are advected north-east from the Atlas Mountains. Especially to the south of Italy, rich moisture will overlap with an elevated mixed layer, resulting in high CAPE of 1000+ J/kg.

Strong frontal lift is forecast and storms are expected along the cold front to spread east. Initially, limited CAPE will also limit the severe weather potential. However, strong low-level shear in excess o 15 m/s will already allow for bowing segments and associated severe wind gust threat. Additionally, embedded supercells are not ruled out capable of large hail and tornadoes.

Across the Ionian Sea, larger convective systems are forecast in response to increasing CAPE. These can develop into long-lived bow echoes capable of swaths of severe wind gusts. Embedded supercells can produce large hail and tornadoes.

Storms are forecast to move onshore across the southern Balkans. Together with the aforementioned potential of severe wind gusts, large hail and tornadoes, heavy precipitation is expected.

Farther north, less CAPE is forecast across the Adriatic. Still, heavy precipitation is forecast in these areas with skinny CAPE profiles, strong frontal lift, and upslope flow. Additionally, low-topped supercells are not ruled out due to the strong low-level shear, capable of producing tornadoes and severe wind gusts.

The vort-max continues to move north-east late in the forecast period. Steep lapse rates travel into the area where they overlap with some low-level moisture advected from the Mediterranean. Although low levels will likely be stable during the night, elevated storms are forecast that will be well-organized in the strongly-sheared environment. Bowing lines will be capable of severe wind gusts.