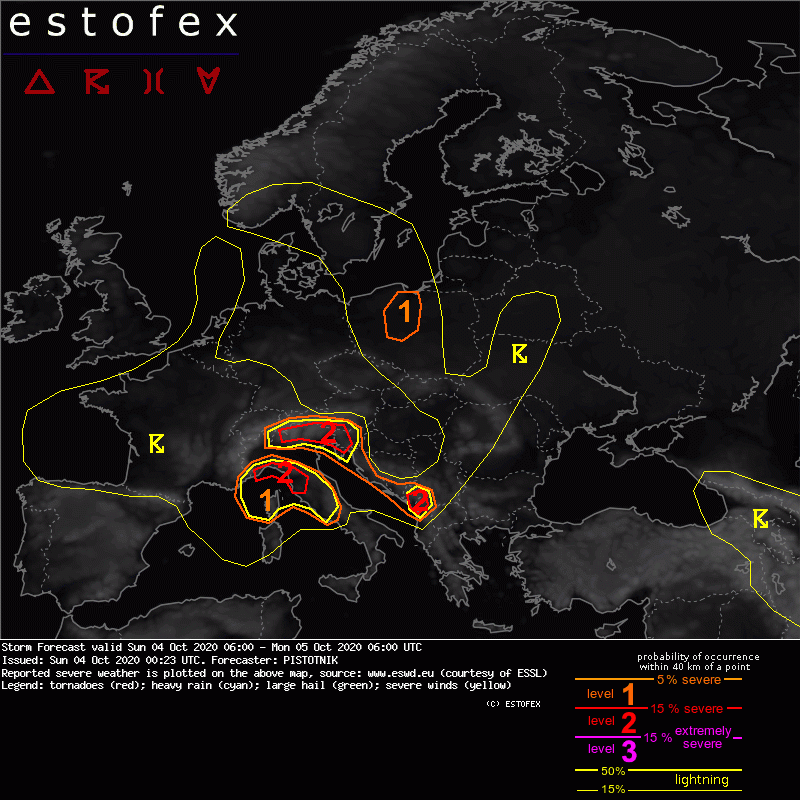 A level 1 is issued for parts of Poland for large hail, severe convective wind gusts and tornadoes.

A strong, deep and only slowly filling cyclone centered over England is the dominant feature on the weather maps. Its circulation influences most of Europe. At its forward flank, a tongue of extremely warm air is advected across the Ionian Sea to east-central Europe and the Baltic States. In contrast, maritime polar air floods the western half of Europe. Numerous pronounced short-wave trough swing around the cut-off low and promote deep convection where they interact with unstable air, most notably in parts of the Mediterranean region.
A blocking anticyclone over Russia slowly recedes, but still creates mild and stable conditions in NE and E Europe.

... belt from the Ionian Sea to east-central Europe and S Scandinavia ...

The strong warm air advection includes a pronounced elevated mixed layer (EML) from the central Sahara. Abundant maritime moisture beneath this EML allows CAPE in excess of 2000 J/kg over the Ionian Sea and surrounding coastal areas (see the Sat 12 UTC Trapani and Brindisi soundings). Over land, daytime heating cannot fully compensate a lack of low-level moisture, but can still create CAPE on the order of 500 J/kg, unusual for this late time of the year. This CAPE reservoir is overspread by strong vertical wind shear (storm relative helicity), which reaches values of 15-25 m/s (150-400 m^2/s^2) across the lowest 3 km and around 10 m/s (100 m^2/s^2) across the lowest 1 km.
Most of the area is overspread by a short-wave ridge during daytime on Sunday, whose subsidence largely compensates or even overcompensates the synoptic lift from prefrontal warm air advection and the mesoscale lift from the eastward moving cold front. Surface-based convective initiation appears therefore quite unlikely. Elevated convection from mid-level clouds can be active early in the forecast period (as a leftover from Saturday's vivid thunderstorm activity from the N Adriatic region to Slovakia) and increase in coverage Sunday night, when the phasing between warm air advection and short-wave troughs becomes better. However, its severe weather risk is very low.
There are, however, two confined areas where surface-based, organized and severe convection is possible:

(1) Montenegro and Albania:
The nose of a warm and very moist southerly low-level jet and onshore/upslope flow create mesoscale lift which is probably strong enough to break the capping inversion. Forecast models remarkably agree on a constantly backbuilding and almost stationary storm cluster in the bordering area between these two countries. If this scenario comes true, precipitation accumulations could well exceed 100 mm, and dangerous flash floods can ensue in the mountainous terrain. Tail-end storms within such a cluster can easily turn supercellular and bring (very) large hail, severe wind gusts and tornadoes in the coastal belt.

(2) central to N Poland:
A strong short-wave trough swings northward from the Czech Republic, Slovakia and Hungary (Sun 06 UTC) to central Sweden (Mon 06 UTC). Lagging behind the cold front, its lift will largely be cancelled by cold air advection - with the expection of a confined area in Poland. Hence there is a limited time window for a few surface-based storms in the 11 to 17 UTC time frame, which can organize into supercells. Large hail, severe downbursts and tornadoes are possible in this case. Despite the limited confidence of occurrence, the conditional severe weather risk appears high enough for a level 1.

Behind the primary cold front, some hundred J/kg CAPE build again over the comparably warm sea surfaces. Synoptic lift with the next vorticity maxima and onshore/upslope flow will likely release this CAPE into a new round of convection from afternoon onwards. Some backbuilding MCSs are expected to affect the coastal areas of NW Italy and the southern Alps. Less moisture and lower CAPE will keep the rainfall accumulations well below than those of the first episode from Thursday to Saturday, but they can still reach 50-100 mm (or locally more) and will likely create further flooding, mudslides and debris flows due to the saturated soils.
Vertical wind shear stays rather weak across lower levels, but increases to >20 m/s across the 0-6 km layer. Tail-end storms in coastal and offshore areas can therefore organize well and bring marginally large hail, tornadoes (either mesocyclonic or non-mesocyclonic) and severe wind gusts.

Marginal instability is present in the maritime polar air, mostly over sea and coastal areas, in the afternoon also further inland in France. Some showers can grow deep enough to produce a little thunder. Isolated severe wind gusts are not ruled out, but are rather attributable to the strong background wind field than to convective enhancement.