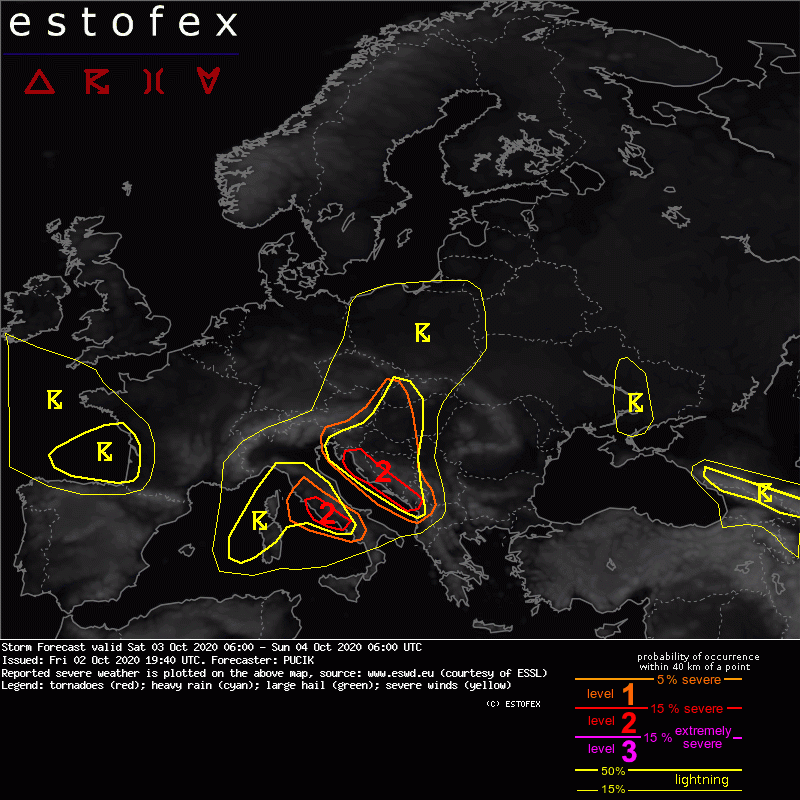 A level 1 was issued across northeastern Italy and Slovenia mainly for excessive rainfall, severe wind gusts and to the lesser degree for tornadoes.


A deep mid to upper tropospheric low will be centred over France, with a sharp short-wave trough that will eject from the Balearic Sea towards Sardegna / Corsica and the northern Adriatic Sea. Strong mid-tropospheric jet with speed of 40 m/s is simulated on the forward flank of the trough. Another short-wave is forecast to reach Bay of Biscay in the overnight hours. Closer to the surface, a cold front will cross the central Mediterranean and a wavy boundary will develop in between of southern Germany and the Czech Republic. This boundary is also forecast to move eastwards in the evening and overnight hours. Ahead of the front, 20 to 30 m/s southerly low-level jet at 850 hPa will advect tropical airmass towards northern Poland. Potent severe weather situation may develop across coastline areas of Italy and the Adriatic Sea in a strongly-sheared environment.

Models unanimously simulate large amounts of convective precipitation across the Level 2 area between 06 and 09 UTC in the environment of 1000 - 2500 J/kg of MLCAPE and DLS > 25 m/s. Besides the strong shear in the deep layer of troposphere, models also forecast strongly curved hodographs in the bottom 1 km with 0-1 km SRH exceeding 300 m2/s2. Kinematic environment would suggest potential for supercells capable of (strong) tornadoes, among other hazards, such as large hail or severe wind gusts. Tornado threat will be determined by convective mode as a presence of a linear system training perpendicular to the coastline instead of isolated cells will diminish the threat to certain degree. At the same time, forecast Skew-Ts also reveal very little 0-3 km CAPE, which may also decrease the tornado threat. Nevertheless, any storm developing in such environment will have a high probability to produce at least some severe weather.

Lack of synoptic-scale support will likely lead to a gradual decrease in the coverage and intensity of convective storms. While it is uncertain how far south will the convection propagate, all models weaken the storms by 12 UTC.

Similar to Central Italy, this area will also encounter environment kinematically very favourable for intense supercellular convection. With 850 hPa wind reaching 20 - 25 m/s and surface southeasterly flow, forecast SRH values reach 200 - 400 m2/s2 in the 0-1 and 400 - 600 m2/s2 in the 0-3 km layer. These very high SRH values will overlap with CAPE exceeding 1000 J/kg ahead of the cold front. Should storms develop ahead of the front with abundance of SBCAPE, they will pose a distinct threat of (strong) tornadoes, as well as damaging wind gusts and large hail.

Initiation of storms ahead of the cold front is also the largest uncertainty in the forecast. It is likely that most of the convective initiation will be tied to the low-level jet overunning the cold front and forming a large, elevated MCS. In such a case, stable boundary layer would decrease threat of tornadoes / severe wind gusts, but threat of large hail or excessive rainfall would be still present.

Lower CAPE values are forecast over this area, but also in kinematically favourable environment with bulk 0-1 km shear between 15 and 20 m/s. That said, it seems that most of the storms will be elevated with rather stable boundary layer as the front crosses region in the evening to night hours. Nevertheless, isolated severe wind gusts will be possible with stronger downdrafts that will penetrate to the surface.