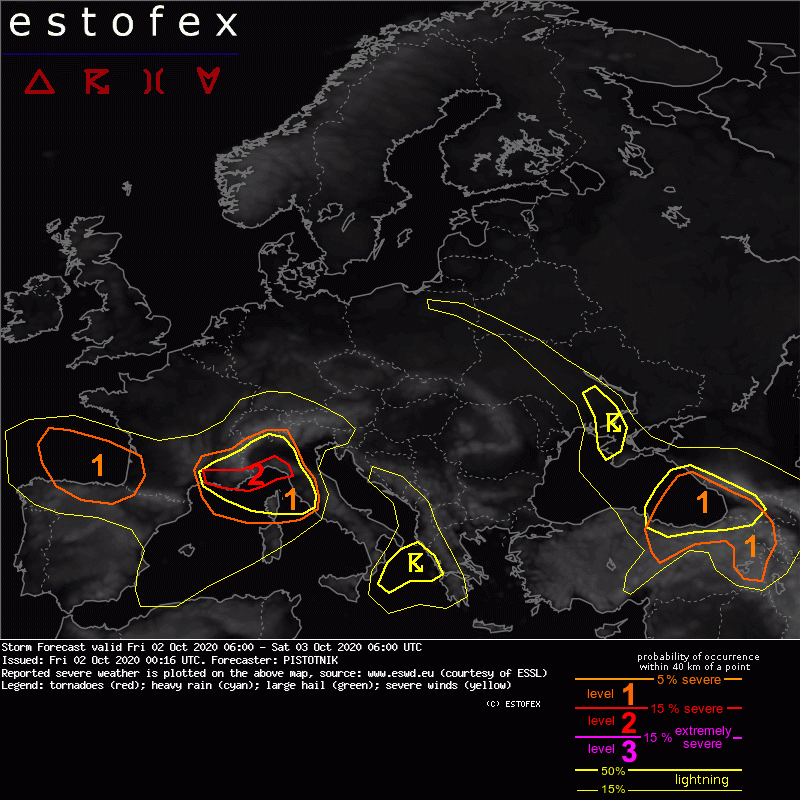 A level 1 and level 2 are issued for S France, Corsica, the Ligurian Sea and NW and W Italy mainly for excessive convective precipitation, severe convective wind gusts and to a lesser degree tornadoes and large hail.

A level 1 is issued for the E Black Sea and coastal areas of Georgia and NE Turkey for excessive convective precipitation and non-mesocyclonic tornadoes (waterspouts).

A level 1 is issued for central and E Turkey and Armenia for large hail, severe convective wind gusts and excessive convective precipitation.

A disturbed streamflow pattern is in place in the European sector. A ponounced cut-off low and a sub-980 hPa surface cyclone slowly move southward from England to France. At their forward flank, strong warm air advection overspreads most of the continent, terminated by the cold front of the cyclone that pushes eastward and reaches a line from the Netherlands to Switzerland, Corsica, Sardegna and Tunisia by Sat 06 UTC.
Further downstream, a large blocking anticyclone stretches from Scandinavia into W Russia and brings calm and still rather mild weather conditions into the northeastern half of Europe.

Three possible environments of deep convection emerge at the southern flank of the big cut-off low:

(1) The warm air advection regime around Italy:
Steep lapse rates of Saharan origin on top of maritime boundary layer moisture create some CAPE, rising from north to south to maximum values around 1500 J/kg. However, the capping will likely be quite strong - this is further backed up by the Thu 12 UTC soundings from Palma, Decimomannu and Trapani, which show a thick cap in the 1-3 km layer. Synoptic lift increases on Friday due to ongoing warm air advection and the approaching mid-level trough, but it is highly doubtful if it will suffice to break this cap.
The persistent upslope flow regimes in the Alpes Maritimes and Liguria as well as along the southern Alps in Piedmonte, Lombardy and Ticino will likely receive more than 100 mm, locally perhaps even more than 200 mm rain during this forecast period. Embedded thunderstorms are possible, but not partciularly likely until Saturday morning, hence this situation is handled only with a level 1 (NB: excessive rain *without* thunderstorms is not covered by ESTOFEX). Since convection will most likely stay elevated, the other severe weather risks are low despite strong vertical wind shear.

(2) The cold front pushing from Spain across the W Mediterranean Basin:
Forecast models simulate a pronounced cold front passage with a marked wind shift, temperature drop and strong to possibly isolated severe wind gusts across Spain in the morning to early afternoon. There is a possibility of a narrow convective rainband, but it will hardly become deep enough for lightning due to limited synoptic lift on the anticyclonic side of the jet stream. In addition, strong offshore (W to SW) winds already ahead of it make an inland advection of Mediterranean moisture nearly impossible.
The cold front will encounter better moisture, and therefore some CAPE, after it enters the W Mediterranean Sea. Isolated to scattered thunderstorms may develop in the afternoon and evening, and severe wind gusts are not ruled out. Embedded thunderstorms also become more likely in the usplope flow regimes from S France to NW Italy as soon as the cold front interferes, and the erosion of the capping inversion should also allow them to become surface-based. As a consequence, a long-loved and side- to backbuilding storm cluster may work its way eastward along the coastline. Under strong vertical wind shear, tail-end storms pose all kinds of severe weather risks at the coast and just offshore. In inland areas, excessive rain with flash floods remains the dominant hazard. Until Sat 06 UTC, leading storms may spread as far as the west coast of central Italy, hence the level 1 and level 2 areas are expanded accordingly.

(3) The maritime postfrontal airmass over the Bay of Biscay and N Spain:
Marginal CAPE in the deeply mixed air allows scattered showers with limited lightning activity. While vertical wind shear is weak and convection will be disorganized, the low-level wind field is strong enough to allow strong to isolated severe wind gusts. In coastal areas, severe wind gusts may even become widespread overnight, when the wind field further strengthens. Due to a limited convective contribution, a level 1 is a proper compromise.

An axis of enhanced moisture along a decaying occlusion allows a little CAPE. Over land, it will be very limited and confined to afternoon hours, and only isolated, short-lived afternoon storms are expected. In contrast, CAPE up to 1000 J/kg over the E Black Sea and surrounding coastlines may keep scattered storms active around the clock. Under weak vertical wind shear and largely saturated profiles, heavy rain and a few waterspouts are the main risks.

Daytime heating can create some CAPE under moderate vertical wind shear (0-3 km: 10-15 m/s) beneath the fringes of the subtropic jet. Scattered afternoon storms are expected and can organize into multi- and possibly a few transient supercells. Large hail, severe downbursts and flash floods are possible. A limiting factor, which may keep the storm coverage rather low, is the possibility of a premature mixing of the shallow low-level moisture in response to strong daytime heating (e.g., in the course of Thursday, 2m dewpoints dropped well below 0C in areas of higher terrain in E Turkey).