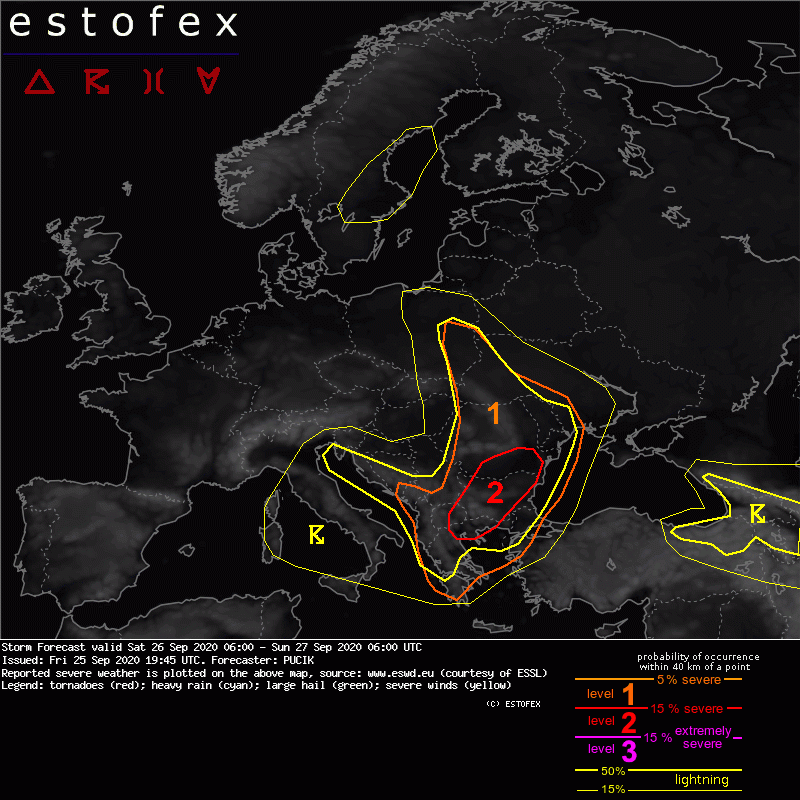 A level 1 was issued across Romania and southern Serbia mainly for excessive rainfall, severe wind gusts and tornadoes.

A level 1 was issued across western Ukraine and eastern Poland mainly for excessive rainfall.

Synoptic-scale situation will be dominated by a large and deep cyclone over central Europe. Its trough will eject from southern Italy through northern Greece towards Romania and Ukraine. Ahead of the low, strong WAA regime with 850 hPa windspeeds between 15 and 25 m/s contributes
to advection of moist airmass from the Aegean Sea towards Romania, Ukraine and eastern Poland. Scattered to widespread storms are forecast ahead of the wavy frontal boundary associated with the low, as well as over the Aegean Sea underneath cold mid-tropospheric airmass.

The highest coverage of severe weather is forecast in a belt from northern Greece towards northern Romania. Here, NWP are in good agreement regarding the build-up of 400 - 1000 J/kg of MLCAPE ahead of the approaching trough / front. Simulated hodographs reveal strong lower tropospheric flow / shear with 0-3 km shear around 20 m/s and 850 hPa flow reaching 20 - 25 m/s. Fast moving and well organised storms, including supercells and bowing segments, are expected. Severe wind gusts will be the primary threat followed by tornadoes, large hail and excessive rainfall. Situation may be limited by the cloudiness from the ongoing storms over the northern Aegean Sea that could hinder build-up of surface-based CAPE.

Towards the late afternoon and evening hours, storm coverage will quickly increase due to the approaching trough in a belt from western Bulgaria through Romania, Ukraine and eastern Poland. Strong low-level shear may allow for tornadoes and isolated severe gusts with surface-based storms. Due to the storms becoming more elevated in nature towards the northern part of the Level 1, tornado and wind gust threat will decrease towards the north, while the heavy rainfall risk will remain. It is likely that one or more MCS will form in the zone between southern Bulgaria and northern Romania, traveling NE-wards, remaining in the zone of the strongest forcing offerred by the sharp trough.