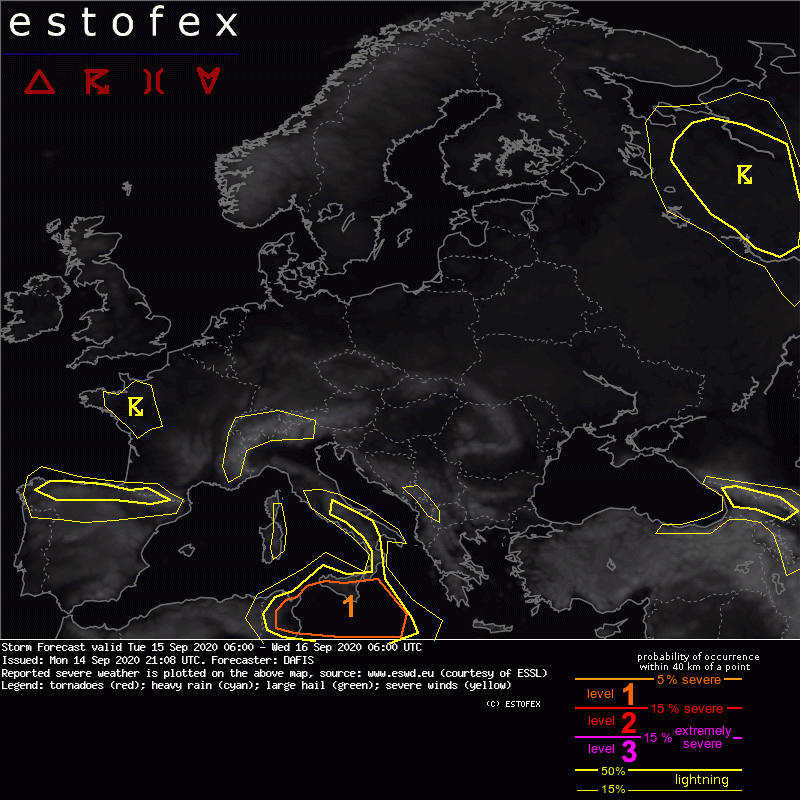 A level 1 was issued for parts of South Italy, Malta, and Tunisia mainly for excessive precipitation, severe wind gusts, and tornadoes.

A Rex blocking pattern has formed over Europe, with a low-pressure system over Central Mediterranean, south of a high-pressure system over Central Europe. Large-scale subsidence and unseasonably high temperatures prevail over the largest part of Europe, limiting convection with some exceptions in the Alps, France, and Spain. In Spain, an approaching short-wave trough will be the main reason for some storms in the northern parts of the country.
In the north-northeastern parts of the continent, the developing polar jet stream exceeds 70 m/s at 300 hPa and creates very strong wind shear, though instability is marginal and confined at very low levels, thus severe convective phenomena are not expected, but in Russia where an overlap of DLS and CAPE is found, a few severe convective wind gusts cannot be ruled out.

A weakening cut-off low over Central Mediterranean continues to destabile the environment, where numerous thunderstorms develop, mostly staying offshore. Very moist and warm air masses are found in the Gulf of Gabes and Sidra, where ongoing convection warms mid-tropopshere and brings low-PV values high in the troposphere. Saturated vertical profiles in the NWP forecast soundings suggest that slow-moving storms will be able to produce excessive precipitation. DLS is stronger than 10-15 m/s to the east of the cold drop, where moisture is limited and CIN is high. Numerous waterspouts are expected into this unstable environment and some of them may pose a threat to coastal areas.

A few NWP models (e.g. IFS and ICONEU) suggest the development of a low-level cyclone under the blob of deep convection in the Libyan Sea during Tue 15/09 and early morning on Wed 16/09. By the time of issuing this outlook (Mon 14/09, 20z), no visible near-surface vortex exists in the Gulf of Sidra. In addition, there is no strong mid/upper-level vorticity in the analysis maps to support the development of a strong surface cyclone and eventually support these NWP model scenarios that deep convection will be able to diabatically intensify this cyclone by generating large values of low-level PV. Even though a tropical transition of a cyclone is very unlikely to happen by the end of this outlook, this interesting set-up needs to be monitored closely for the following 48 hours.