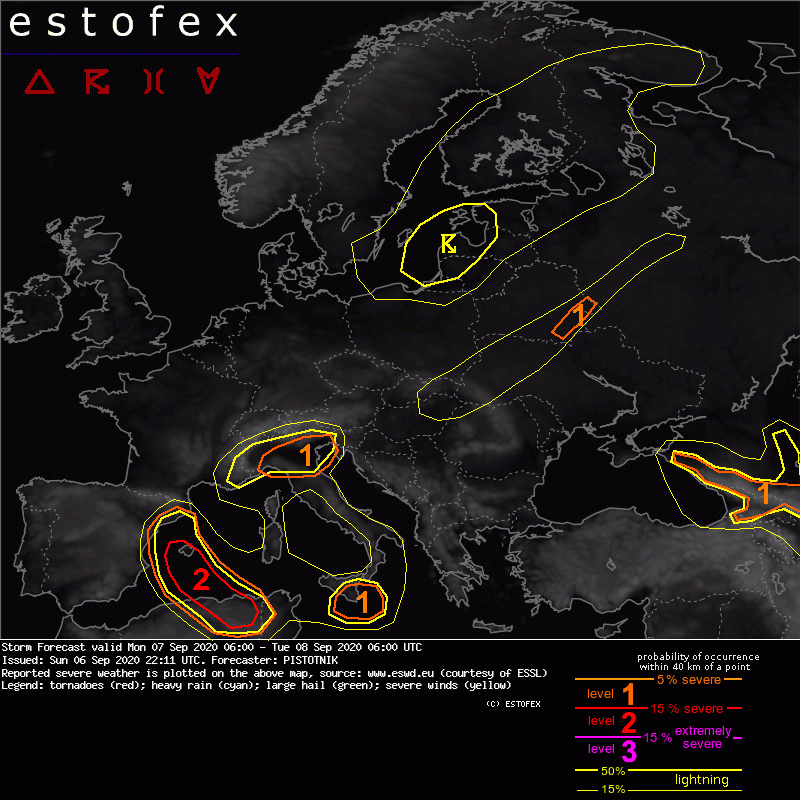 A level 2 is issued from the Balearic Islands to NE Algeria for excessive convective precipitation, tornadoes, large hail and severe convective wind gusts.

Level 1 areas are issued for parts of Italy and for NE Spain mainly for excessive convective and for non-supercellular tornadoes (waterspouts).

A level 1 is issued for parts of Georgia and the Russian Caucasus region for large hail, excessive convective precipitation and to a lesser degree for severe convective wind gusts.

A level 1 is issued for SE Belarus for large hail, severe convective wind gusts and to a lesser degree for tornadoes.

A long-wave trough stretches from Scandinavia to central Europe and proceeds eastward across the Baltic States into NW Russia and Belarus. At the tip of this trough, a mid-level low cuts off over S France and slowly moves southward to the Balearic Islands.
In the wake of the main trough, a northward displaced zonal flow establishes from the North Atlantic to the Baltic Sea. High pressure / geopotential builds further south and gradually connects with another extensive anticyclone over SE Europe.
Moderately cool air is in place in the range of the trough and cut-off low, whereas warm late summer temperatures prevail in the regions under anticyclonic influence.

Sunday's 12 UTC soundings showed little to no CAPE yet apart from the southern side of the Alps, where it reached up to 700 J/kg. However, warm air advection on top of very rich maritime low-level moisture and synoptic lift should create steeper lapse rates and raise the CAPE magnitude to values up to 1000 J/kg on Monday. The capping inversion is eroded by synoptic lift but will probably still keep convective initiation rather isolated.
The area of biggest concern is the open sea southwest and south of the Balearic Islands, where a big storm cluster is expected to be active or re-form throughout the forecast period, following the area of strongest lift that swings around the cut-off low. SW-erly mid-level flow on top of NE-erly surface winds (inflow into the African heat low) creates 0-6 km shear up to 20 m/s. The storm cluster and possible discrete convection in its periphery can bring all kinds of severe weather: large hail, tornadoes, severe straight-line winds and also flash floods in case it moves onshore on the Balearic Islands or - in the second half of the forecast period - in Algeria. In inland areas of NE Algeria, scattered storms can also form and organize well already in the afternoon and evening, also with a risk of large hail, severe downbursts and flash floods.

Other areas of enhanced thunderstorm probabilities under synoptic and/or orographic lift are (1) the sea waters between Malta and Sicily, (2) N Italy including coastal areas of the Ligurian and Adriatic Sea, and (3) a convergence zone along the Catalonian coast in the wake of the Pyrenees on the back side of the cut-off low. Vertical wind shear is rather weak in these regions, and storms should stay disorganized. Over land, they will be mostly confined to the afternoon hours. The main risks are isolated heavy rain and a few waterspouts.

... Georgia, Russian Caucasus region and around ...

Steep lapse rates, created over the mountains, and rich low-level moisture in the lowlands and coastal areas create some hundred to 1000 J/kg CAPE in a very warm airmass and under quiescent synoptic conditions. Scattered storms form mainly in the afternoon over the mountains, but will struggle to propagate to lower terrain. Under 10-15 m/s deep-layer shear, multicells are expected to be the dominant storm mode. A few large hail and flash flood events are possible and isolated severe downbursts not ruled out.

A cold front moves southeastward ahead of the mid-level trough. Forecast models agree on a narrow belt of enhanced low-level moisture and some hundred J/kg CAPE immediately ahead of the front which partly overlaps with moderate to strong vertical wind shear and veering wind profiles. However, convection-resolving models simulate very little to no convective precipitation. A probable reason is the position of the cold front some distance ahead of the mid-level trough, which could award the cold front an "ana front" character with a gentle angle of the frontal plane. In this case, stratiform rain with only elevated, embedded convection (if any) is the most likely scenario.
Trusting this guidance of the high-resolution models, only a low-probability lightning area is issued along the cold front. Only SE Belarus is included into a level 1 due to some signals for a few surface-based storms which could organize very well in this strong kinematic environment and produce large hail, severe wind gusts and perhaps an isolated tornado.