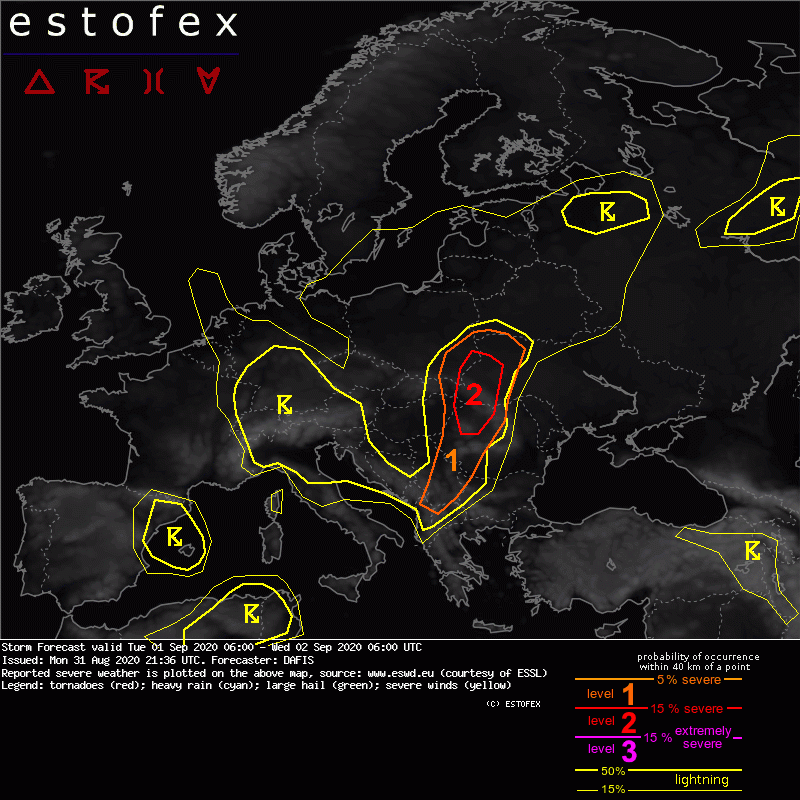 A deep long-wave trough with an axis extending from Scandinavia towards Italy has established a strong souht-southwesterly flow over the Balkans, Central and Eastern Europe. This configuration results in the advection of warm and moist marine air masses towards Eastern Europe and in long-lasting convective phenomena under a jet-stream which increases the severe weather threat. Under the core of this trough, a few storms are also expected in Central Europe where some convective instability is formed due to the cold mid-level anomaly and the unstable low-level air masses.
Another short-wave trough can be found in the analysis maps in NE Atlantic, traveling fast towards the Iberian Peninsula on Tue 01/09 and will enter the Mediterranean basin by the end of this outlook, providing a synoptic lift to unstable air masses in Spain and in North Africa.

The PV streamer associated with the long-wave trough has been severely eroded by ongoing convection on Mod 31/08 but a strong wave is expected on Tue 01/09 coming from the southern leading edge of the trough over the Adriatic Sea, and will travel NE over the Northern Balkans. Below this wave, a low-level vortex is simulated by almost all the available NWP models, where strong baroclinicity is found, inside the level 1 and 2 areas.

During the maximum amount of insolation in the afternoon, several storms in the Balkans will be able to benefit from 15-25 m/s 0-3km shear and comparable or stronger DLS, where MLCAPE is calculated close to 1000 J/kg by most of the global and regional NWP models. The main threat will be large hail from isolated cells but also excessive precipitation from training convection, as the DLS vector will have a small angle with the convective boundary position. Given the very strong flow at mid-levels and up to 15 m/s at 850 hPa, severe wind gust at the surface cannot be ruled out. Moreover, tornadoes may form inside the level 2 area as some surface-based, isolated supercells may get benefit of strong 0-1 km shear and more than 100 m2/s2 SREH0-1km. The thunderstorms will progressively become elevated after 18z and storm activity will drop significantly after 00z, with only a few elevated cells surviving later in W Ukraine and Belarus.