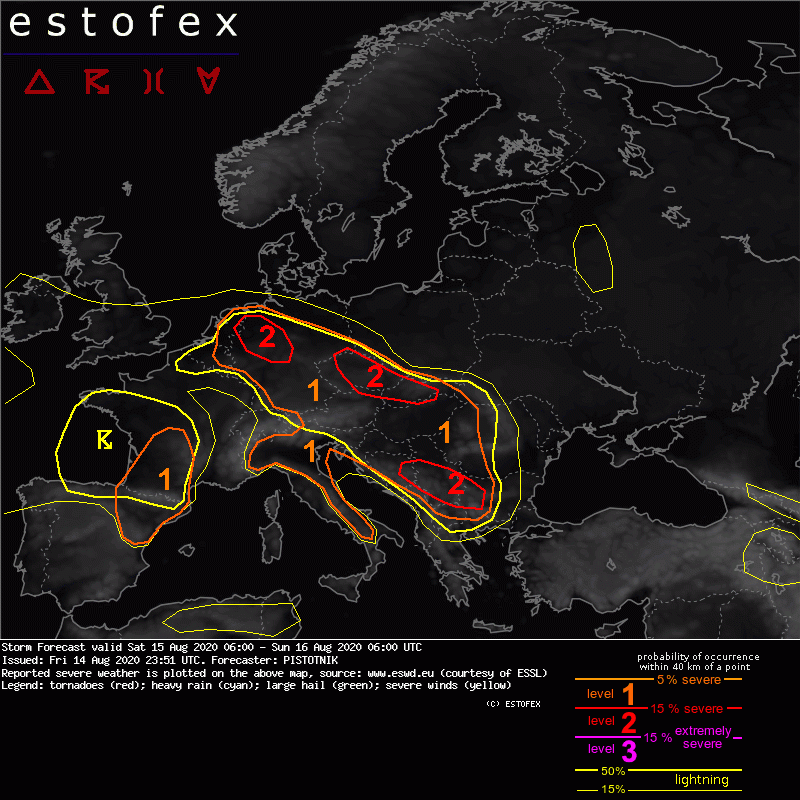 A level 1 and level 2 are issued from the Netherlands across central Germany, the Czech Republic, Slovakia and E Hungary to the central Balkans for excessive convective precipitation, large hail and severe convective wind gusts.

A level 1 is issued for NE Spain and Italy mainly for large hail and to a lesser degree for severe convective wind gusts.

Weak pressure gradients and warm air cover most of Europe. A weak but extensive antiyclone is centered over the North Sea at 500 hPa and over Belarus and the Ukraine at the surface. A cut-off low over the Bay of Biscay slowly approaches France.
The main frontal zone runs far north across Iceland and N Scandinavia (which is crossed by a pronounced cold front) before it bends southward around a long-wave trough over Russia.

Very warm, moist and unstable air wraps around the forward flank of the Biscayan cut-off low. After several days of widespread convection, the airmass is characterized by plentiful moisture (2m dewpoints often between 17 and 21C, precipitable water around 40 mm) but meagre lapse rates, which largely confine CAPE to values around 500 J/Kg. Numerous, mostly daytime-driven storms are once more expected on Saturday along outflow boundaries, other convergence zones, insolation gradients and over orographic features. They will follow erratic, outflow-driven tracks and may grow into some large, disorganized clusters.
Very moist air, slow storm motion and weak vertical wind shear provide a prime environment for excessive rain with flash floods. A few large hail events and severe downbursts are possible as well, mostly near the leading convergence zone from NW Germany to Slovakia as well as over the Balkans, where the air is previously untouched by convection and allows still steeper lapse rates and more CAPE up to 1500 J/kg. Over the Balkans, deep-layer shear around 10 m/s can also allow some multicellular organization, which further favors in particular the hail risk.

The hot airmass over the Mediterranean region is overspread by moderate westerly mid-level winds, which advect very steep lapse rates from NW Africa, the Spanish plateau and the Western Alps on top of abundant lowland and maritime moisture. Expected CAPE magnitude is around 1000 J/kg in NE Spain and S France and between 1500 and 3000 J/kg in coastal areas of the W and central Mediterranean Basin, including N Italy. This impressive CAPE reservoir was also confirmed by numerous soundings on Friday and the days before. It overlaps with 10-15 m/s deep-layer shear, more towards the south, where the capping is very strong, though.
Much of the area will be under synoptic subsidence beneath a weak mid-level ridge, which allows only isolated storms over the mountains. Only in the afternoon and evening, storm coverage will start to increase from the Pyrenees into SW France. Multi- and supercells will be the dominant convective mode and can easily produce large to very large hail and some severe downbursts. In SW France, heavy precipitation may occur as well if upscale growth sets in. A level 2 was considered for the French Pyrenees forelands, but the late arrival of the storms could turn them elevated and reduce their severe weather risk while they spread into France.