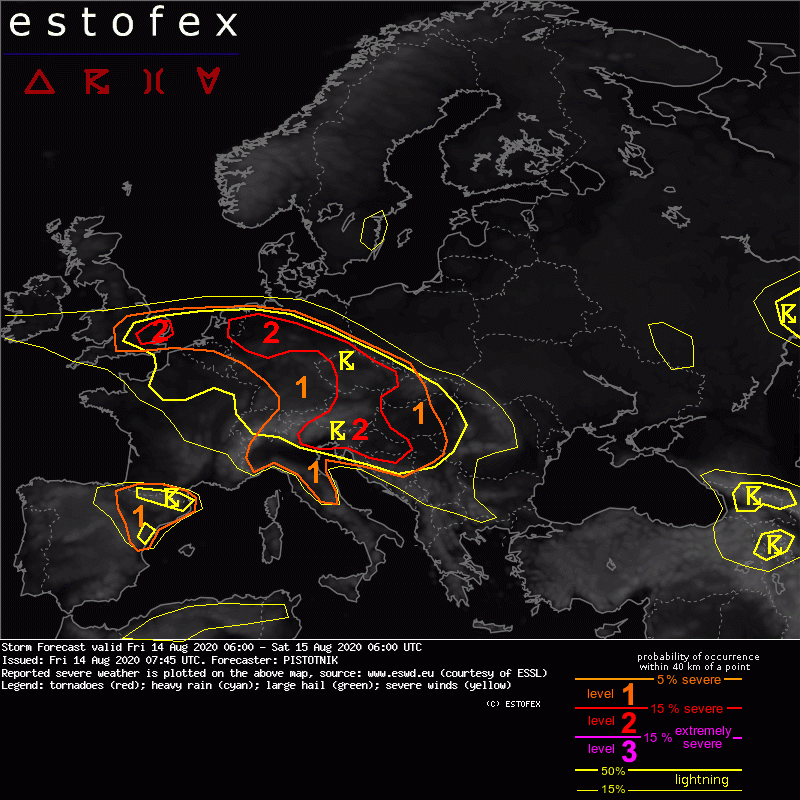 A level 1 and level 2 are issued for SE England and the Netherlands for excessive convectived precipitation.

A level 1 and level 2 are issued for Germany, the Czech Republic, Slovakia, Hungary, Austria and E Switzerland mainly for excessive convective precipitation and to a lesser degree for large hail and severe convective wind gusts.

Weak pressure gradients and warm air cover most of Europe. An axis of slightly higher 500 hPa geopotential stretches from the Balkans to the North Sea. A stationary cut-off low is placed west of the Bay of Biscay.
The main frontal zone runs far north across Iceland and N Scandinavia before it bends southward around a long-wave trough over Russia.

... belt from S England to Slovakia and Hungary ...

Very warm, moist and unstable air has settled at the forward flank of the Atlantic cut-off low. A history of widespread (and often severe) storms has "overworked" the airmass, hence lapse rates (and the overall CAPE magnitude) have weakenened, while particularly rich low-level moisture with 2m dewpoints often between 17 and 21C is present. Another day of widespread storms is in store, initiating from late morning onwards along numerous outflow boundaries, other convergence zones, insolation gradients and over orographic features. Very moist air, slow storm motion and weak vertical wind shear provide a prime environment for excessive rain with flash floods. The risk of (marginally) large hail and wet downbursts is reduced by the mentioned convective overturning, but a few events are still possible, especially near the main and leading convergence zone from NW Germany to Slovakia, where the air has not yet been touched by previous convection.
Storms will gradually weaken after sunset, but a few can continue to form throughout the night.

The hot airmass over the Mediterranean region is overspread by moderate westerly mid-level winds, which advects very steep lapse rates from NW Africa, the Spanish plateau and the Western Alps on top of abundant lowland and maritime moisture. Per latest soundings, CAPE often reaches 1500-3000 J/kg and is overspread by 10-15 m/s deep-layer shear.
Despite some travelling vorticity maxima, convective initiation may be difficult against a strong cap and entraining dry mid-level air. Current thinking is that only a few explosive storms will form over mountains in NE Spain, the N Appennines and the Dinaric Alps in the afternoon and evening. The most realistic scenario for a higher coverage are storms from the Southern Alps (where convective initiation should be unproblematic) propagating into the forelands in the evening and first half of the night. Some high-resolution models suggest that also the sea breeze front in NE Italy should be monitored for convective initiation.
Multi- and some supercells will be the dominant convective mode. Large to very large hail and severe downbursts are the main risks in early stages, before upscale growth into a few MCSs could result in a distinct flash flood risk later on. An isolated tornado cannot be ruled out in case storms indeed manage to tap into the Adriatic sea breezes, where cloud bases are low and 0-1 km shear is enhanced.
Convection will slowly weaken overnight. Decaying storms may also spread into Serbia and even Romania until Saturday morning, but the severe weather risk decreases.