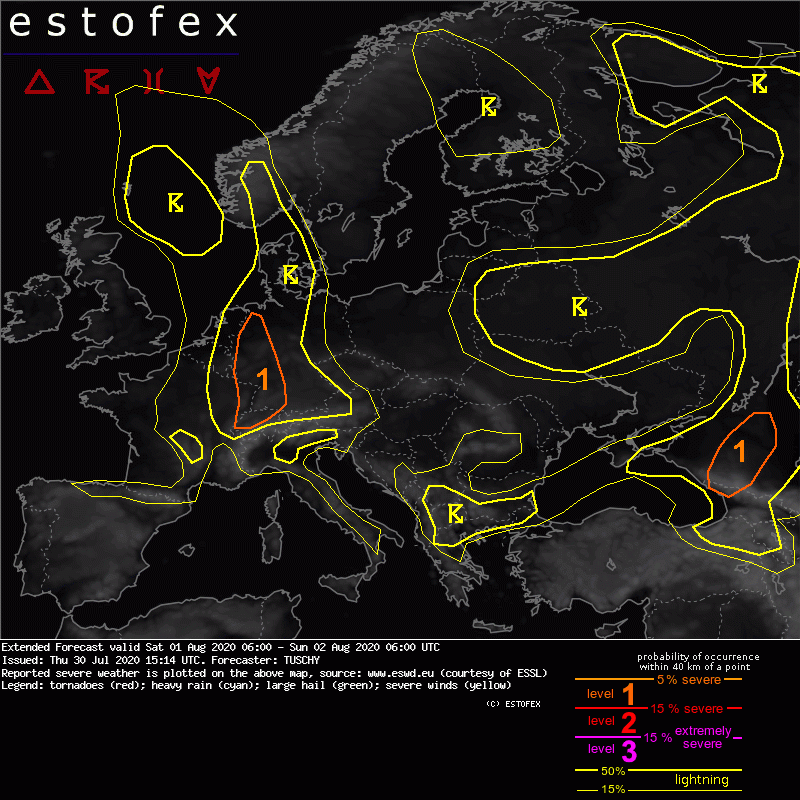 A level 1 was issued over W/SW Germany mainly for isolated large hail, severe wind gusts and heavy to excessive rain.

A level 1 was issued for S Russia into far NW Georgia mainly for large hail and severe wind gusts but also for excessive rain.

In the extended range, the mobile ridge moves east during the forecast with its axis placed over Poland/Austria during the overnight hours. An extensive Atlantic cyclone flips the mid/upper flow into the cyclonic mode over NW and CNTRL Europe. Peripheral impulses cross Ireland/Scotland and England during the forecast and bring unsettled conditions to these areas.
The upper trough over E Europe slows down with another impulse digging south along its SW flank. This supports an ongoing apmplification trend.
The aforementioned impulse over the Balkans in SWODY1 enters the E-Mediterranean as a strengthening impulse but it won't get caught by the major trough to its NE.

The cold front over the Black Sea continues to move SE and it approaches the eastern fringe of our forecast domain during the end of the forecast.
Another cold front over CNTRL Europe moves slowly east with an ongoing prefrontal convergence zone present in all models. Both features will act as the driving forces in this forecast period for DMC activity.

Major uncertainties continue for this period and hence the lightning and level areas are still very broad. The main focus will be the interaction of the cold front/prefrontal convergence zone with a plume of moist/unstable air over E-France/Switzerland into Germany.
Low tropospheric moisture fields are highly divergent between ICON and IFS with IFS showing a broad moisture plume over W-France and less along the Alps while ICON acts reverse. Both have a good handling with the current moisture distribution but diverge with the moisture advection over W-Europe in the SWODY1 period.

An eastward moving PV streamer crosses N Switzerland/E France/W Germany already during the start (06-12Z) and CNTRL/S Germany thereafter. This should assist in ongoing and/or early CI which should stay slightly elevated until noon.
Thereafter however, various possibilities for CI arise with surface based activity: along the orography, laid out outflow boundaries from the morning activity and CI driven by large-scale ascent. With numerical guidance hinting at 1000 J/kg, initiating thunderstorms pose and isolated large hail threat. In addition, DLS of 10-15 m/s may support a few longer-lived updrafts with and attendant hail risk. Severe to damaging downburst events are also forecast with a well mixed and deep subcloud layer. Rapid upscale growth into numerous slow moving clusters is forecast betimes with a diminishing hail but ongoing cold pool driven regional/temporal (severe) wind gust threat. Hodograph structure varies regionally and offers some indications for preferred right moving (ICON) or left moving storms (IFS) but overall a messy storm motion with lots of interaction is a good bet for now. Placed the level 1, where current DMC initiation looks most likely.
Next to wind and hail, heavy to locally excessive rain is possible due to slow storm motion, storm mergers and clustering activity.
Most of the activity over W Germany should see increasing subsidence behind the PV anomaly during the afternoon/evening, but it remains questionable if this has an effect on ongoing convection. It however could become a more important player if the drier ICON is on the right track and it could assist in suppressed convection over W/CNTRL Germany during the forecast period. Right now we preferred the IFS solution due to the expected amount of ongoing convection from the previous night which should support CI.

During the night, IFS blows up convection with others keeping the activity more scattered. Weak shear and diminishing CAPE magnitude should lower the severe risk betimes.

Better shear/CAPE overlap exists over S Russia but models diverge about the CAPE magnitude. A lot depends on how widespread convection evolved in the previous night which could mess up diabatic heating during the day. A confined level 1 was added mainly due to impressive inverted-V signatures and an attendant severe wind gust threat with any thunderstorm. In addition, large hail is possible.
We expanded the level 1 to the Black Sea to account for excessive rain along the western fringe of the Greater Caucasus.