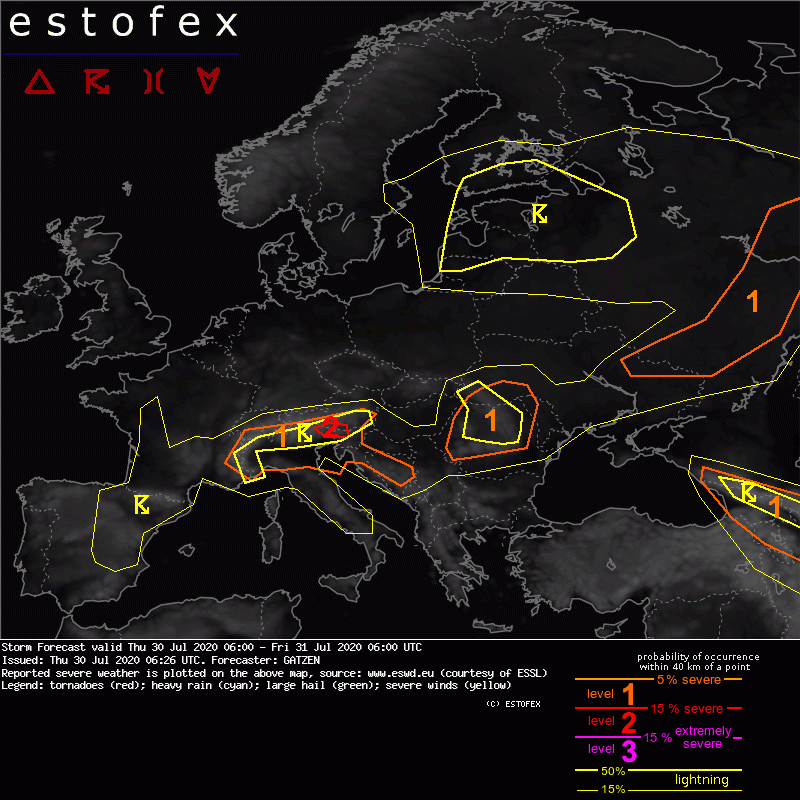 A level 2 was issued across southern Austria into Italy and Slovenia mainly for large hail.

A level 1 was issued across northern Italy and southern Alps mainly for large hail, severe wind gusts, and heavy rain.

A level 1 was issued across northern and western Romania and south-western Ukraine mainly for large hail and heavy rain.

A level 1 was issued across south-western Russia mainly for large hail and severe wind gusts.

A level 1 was issued across the Caucasus region mainly for large hail and severe wind gusts.

Steep lapse rates are present across south-western Europe towards the Alps and Balkans. Rich low-level moisture extends along the frontal boundary.

At the anticyconically sheared right entry of the mid-level jet, a very unstable air mass is situated south of the Alps. Latest dewpoint reading indicate lower 20s and steep lpase rates are indicated by latest models, that forecast high MLCAPE in the afternoon. Initiation of storms is expected around noon over the southern and central Alps. With high CAPE and moderate shear that gradually increases towards the north-east to around 15 m/s DLS, clusters and multicells are expected. Supercells are not ruled out especially across the highlighted level 2 area. Large or very large hail are forecast, along with locally heavy rain and severe wind gusts.

Less confidence is expected across northern Italy, given some capping inversion and weak QG forcing. However, storms may spread into the low-lands in the afternoon along their leading gusts fronts. Due to very high MLCAPE in excess of 2000 J/kg, an MCS is not ruled out, capbale of producing severe wind gusts.

Near the frontal boundary, rich low-level moisture is present that overlaps with some low-topped steep lapse rates. Storms are especially expected over the mountains due to rather weak frontogenetic lift. Deep layer vertical wind shear increases towards the north, with a potential of well-organized storms including supercells. Large hail is the main threat, along with locally heavy rain in the mountains where repeating initiation is not excluded.

A cold front travels over the level 1 area, where rich low-level moisture overlaps with moderate lapse rates and moderate MLCAPE is expected. Storms along the cold front can develop into supercells given strong deep-layer vertical wind shear. Storm motion vectors along the cold front suggest some potential of a cluster of storms. Large hail and severe wind gusts are the main threat.

Isolated storms are forecast in a slightly unstable air mass with moderate to strong deep-layer shear in the southern portions of the level 1. Expect some supercells capable of large hail and severe wind gusts. Main limiting factor is rather weak instability.