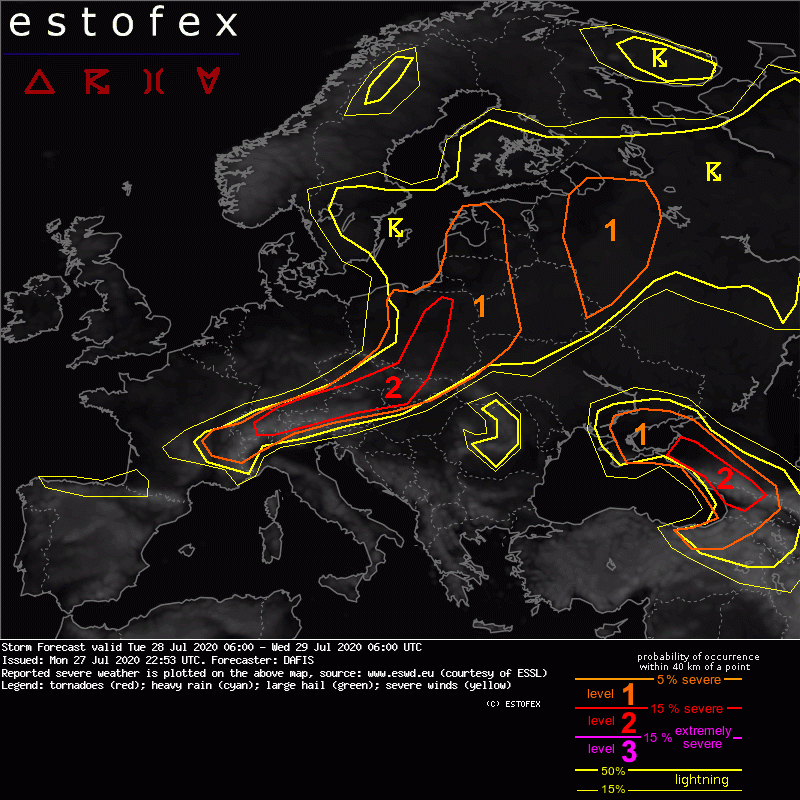 A level 2 was issued for parts of SW Russia and Georgia mainly for severe wind gusts, large hail, and to a lesser extent tornadoes.

A level 1 was issued for parts of W Russia mainly for excessive precipitation and large hail.

A developing ridge in the Mediterranean and an intensifying trough in North Europe create a strong thermal gradient over Central Europe, resulting in strong baroclinicity and the development of a jet stream extending from France, all the way E-NE to Russia. The trough has a cut-off with several centres surrounding the North Sea, but one wave, in particular, is going to aid DMC initiation and propagation in Central Europe, at the southernmost leading edge of the trough.
Several more cut-off lows can be found in the forecast maps, one in SE Iberia, one over the Black Sea and two more in western Russia. Some of them will be associated with widespread CI and on some occasions, severe weather events.

As the jet-stream over Central Europe is intensifying, below the cut-off low in North Sea, a surface cyclone is developing in a strongly baroclinic environment. The resulted cold front is expected to cross Central Europe during Tuesday 28/07, initiating several storms, some of them becoming well-organized and dangerous. NWP model analyses show more than 10 g/kg PBL mixing ratios north of the Alps, where a tongue of warm low-level air mass is moving E-NE from SE France and along with diurnal solar heating, we expect very steep lapse rates over Switzerland, Austra, N Italy, S Germany. Potential velocity fields near the surface show that strong convergence in this part of level 2 area will be the first to experience DMC, before 15z. Storms will be able to benefit from more than 1500 J/Kg MLCAPE, overlapping with more than 20 m/s DLS. In addition, SREH0-3km exceed 150-200 m2/s2 due to the low-level veering wind profiles. A few supercells are expected and a few MCSs, propagating east, producing large hail and damaging wind gusts. In E Austria, Slovakia and Hungary, the flash flood risk will be also high.

Along with the cold front passing in Poland, even though CAPE will be mostly ranging below 1000 J/kg, DLS and lapse rates will be weaker, the DLS vector will be almost perpendicular to the boundary movement. A few discrete storm cells will be able to produce severe gusts and spawn tornadoes, given the LLS with up to 15 m/s at 850 hPa, and 0-1km helicity.

Storms will continue moving east during the night of Tue 28/07, and most probably most of them will survive until the early morning on Wed 29/07, but the elevated storms will pose a low severe weather threat, apart from excessive precipitation.

A pool of highly moist low-level air masses exists in E Black Sea and a cut-off low over Crimea creates very steep lapse rates to the east. DLS will locally exceed 20 m/s and MLCAPE can reach up to 3000 J/kg according to GFS. PVA and convergence in topographic features guarantee CI before maximum diurnal solar heating. Several large hail and severe convective wind gust events cannot be ruled out, as well as several tornadoes close to the coasts where LLS maximizes.

Unstable low-level air masses are found close to the borders of Belarus and Russia, where several diurnally driven thunderstorms are expected. High CAPE and saturated vertical profiles increase the threat of flash floods and large hail, but no larger than 2-3 cm in diameter.