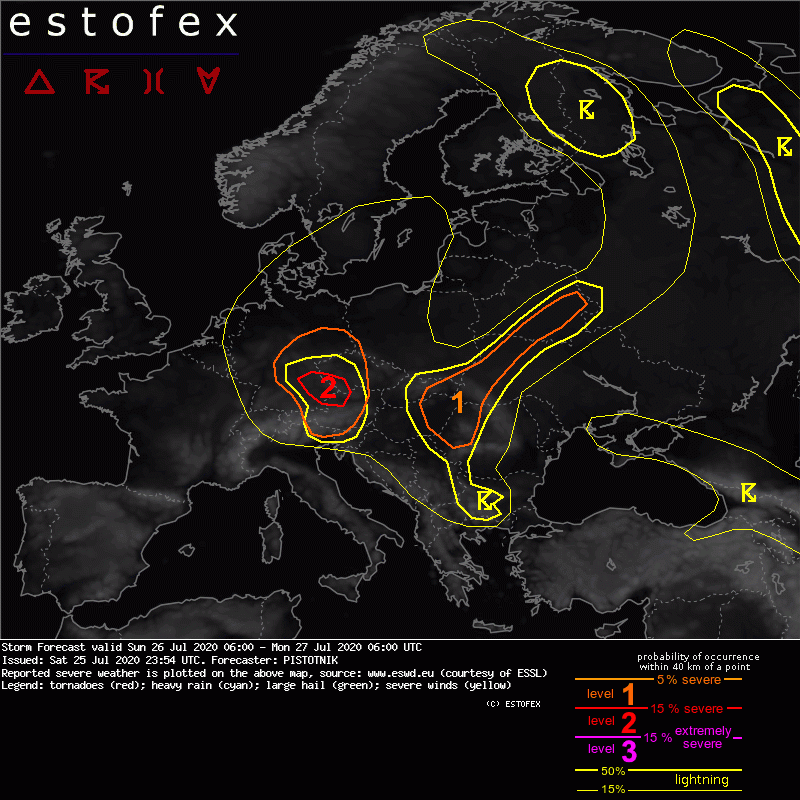 A level 1 and level 2 are issued for E and S Germany, the W Czech Republic and N Austria for severe convective wind gusts, large hail and tornadoes.

A level 1 is issued for S Austria and NE Italy mainly for excessive convective precipitation, large hail and to a lesser degree for severe convective wind gusts.

A level 1 is issued for parts of Romania, Hungary, Slovakia, the Ukraine and Belarus mainly foer excessive convective precipitation and to a lesser degree for large hail.

An active high-index pattern remains in place. A large and pronounced cyclone north of the British Isles emerges as the dominant player. The zonal flow strengthens at its southern flank and steers an occluding frontal system into central Europe, followed by a younger secondary cyclone that approaches the British Isles and France towards the end of this forecast period.
Further downstream, the westerly flow fans out and gives way to weak pressure and temperature gradients over E Europe. Very warm to hot and calm mid-summer conditions prevail in the Mediterranean region.

At least low-end CAPE is expected to form across wide areas around the occluding frontal system in response to daytime heating of moist, maritime air. Owing to the unseasonably strong dynamics, the cold front will likely attain a "split front" character, which would be more typical of cold-season events. This mesoscale development opens up a time window for organized convection.
The first part of the front (in synoptic terms interpretable as the upper-level cold front) crosses the western half of Poland, the Czech Republic and Austria in the 09 to 18 UTC time frame with mid-level clouds, rain and possibly isolated to scattered, embedded convection. This convection will initially be elevated and may root down to the surface from noon onwards, but limited CAPE and vertical wind shear should keep these early storms disorganized and mostly non-severe.
Behind a narrow belt of strong subsidence and clearing skies, strong mesoscale lift arrives ahead of a short-wave trough and with a temporary return of low-level warm air advection into the southeastern half of Germany, before the low-level cold front swings in. CAPE on the order of 500 to 1000 J/Kg builds within a couple of hours, and scattered thunderstorms are expected to from from late morning onwards. Strong 0-3 km shear around 15 m/s and the mentioned mesoscale lift will promote an organization into multicells, supercells and/or bowing line segments with a risk of severe downbursts and 2-3 cm sized hail. In addition, enhanced low-level shear and veering under rather low cloud bases (~1000m) point to a possibility of one or two tornadoes.
Another convective "hot spot" develops in the afternoon and evening in NE Italy, S Austria and Slovenia, when the tail of the short-wave trough and the cold front cross the main Alpine crest. Despite similarly strong vertical wind shear, the more flow-parallel orientation of the lift axis and the possibility of training convection shift the main risk to excessive precipitation. However, more discrete and leading storms towards the east and south can also organize well with additional risks of large hail and (to a lesser degree) severe wind gusts.
Convection will gradually weaken and decay until midnight.

CAPE up to 1500 J/kg builds in areas of augmented low-level moisture, mostly a leftover from decayed frontal systems. Scattered daytime-driven storms are expected over orographic features, along outflow boundaries and other convergence zones. Limited lapse rates, plentiful low-level moisture, weak vertical wind shear and a lack of synoptic features provide a prototypical environment for heavy rain with an attendant flooding risk. In addition, marginally large hail (mainly with initiating storms) and one or two short-lived, non-mesocyclonic tornadoes are not ruled out.
Some areas might see more concentrated severe weather events under such a CAPE magnitude (especially if convection grows into larger clusters), but the lack of focal points precludes a level 2.

Southwesterly mid-level flow advects hot air with very steep lapse rates from the Turkish plateau on top of rich moisture in lowlands and coastal areas. This process creates an overlap of robust CAPE (500-1500 J/kg) and enhanced 0-6 km shear (~15 m/s), but the moist boundary layer is strongly capped, which even resulted in partly persistent stratus decks on Saturday. Forecast models show another round of scattered weak precipitation signals in the current forecast period (also spreading into SW Russia Sunday night), but they are rather interpretable as elevated convection in the strong warm air advection regime, while only high terrain will allow isolated surface-based afternoon storms, struggling against very dry environmental air.
If convective updrafts manage yet to ingest the moist lowland air, organized storms with a primary risk of large hail are possible, but this scenario is too conditional for a level 1.