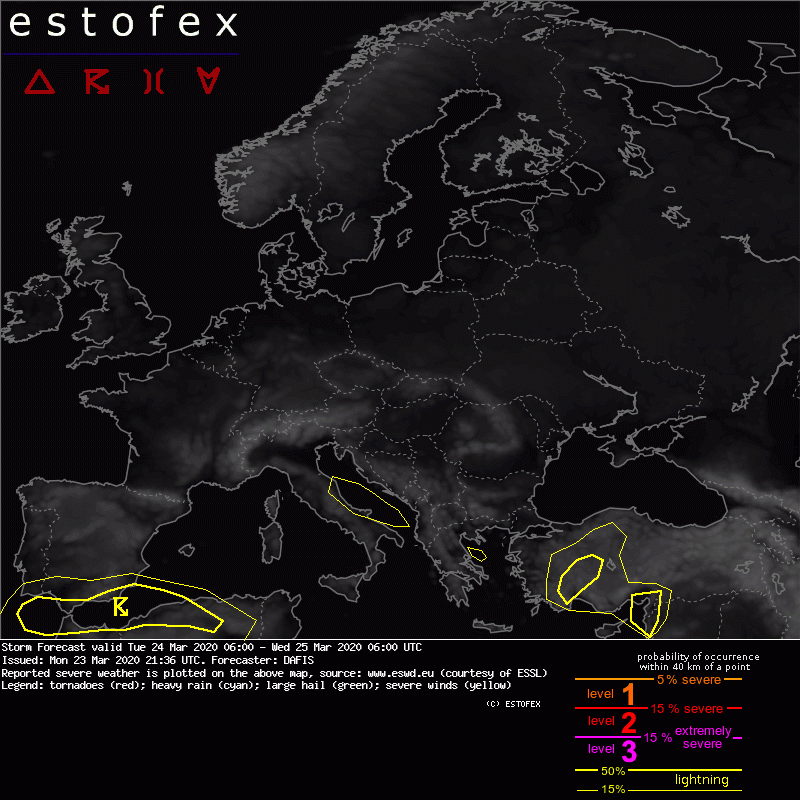 No threat levels have been issued

A strongly tilted trough with an axis extending from Russia towards Italy brings cold and dry air masses over Central Europe and the Mediterranean. In the western parts, an intensifying ridge is interacting with very cold polar maritime air masses in North Atlantic resulting in a strong polar jet stream. This ridge will also result in an anticyclonic Rossby wave break over Eastern Europe on Tuesday 24/03 and the formation of a cut-off over the Adriatic Sea. Another mid-level cold drop is found over the southern parts of the Iberian Peninsula and NW Africa which destabilizes warm and moist air masses.

Deep convection events will be limited and mostly found offshore. The best conditions for thunderstorm activity are found in the Western Mediterranean where synoptic lift, steep lapse rates, and moist PBL suggest that several storms will be able to form but remain non-severe. Locally excessive precipitation events cannot be ruled out in NW Africa.
The eastern parts of Italy will be under the influence of strong NE flow from the Adriatic Sea bringing unstable air masses on-shore. A vorticity maximum aloft and orographic lift may lead to convective initiation but limited low-level moisture shows low probability of deep convection occurrence.
Finally, a short-wave trough over Turkey and the Middle East is expected to provide lift to unstable air masses but again the lack of strong wind shear and high CAPE limit the probability of severe convective events.
A few waterspouts may form in the Adriatic, N Ionian, and Levantine Seas, as well as close to the southern coasts of Spain.