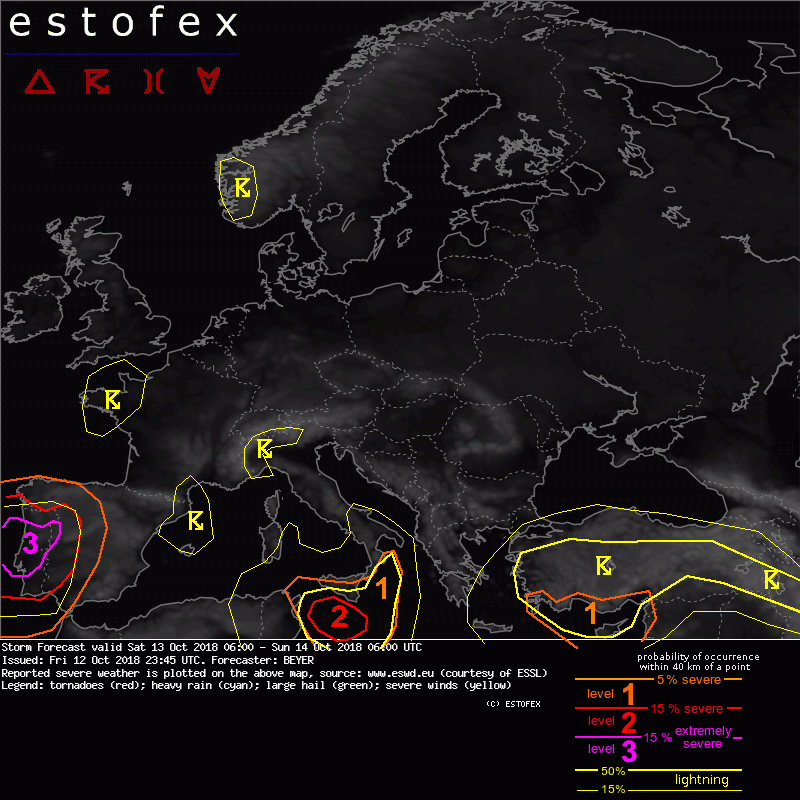 A level 3 was issued for parts of Portugal surrounded by a level 2 covering also parts of Spain mainly for severe to damaging wind gusts and to a lesser extent for (strong) tornados and excessive precipitation.

A level 2 was issued for parts of Sicily and Malta for excessive precipitation.

A level 1 was issued for parts of Turkey and Cyprus for excessive precipitation.

A strong and widespread upper level high is influencing large parts of the forecast domain with stable conditions. South of the high-pressure system two separated upper-level lows can be found over the Mediterranean Sea - one close to Turkey and the other over Southern Italy and Sicily.

Over the near North Atlantic Ocean, a strongly amplified and broad trough is active, leading to that southerly /southwesterly flow over most parts of Europe and thus to unusually warm temperatures over most parts of Europe. On the forward flank of the trough, several surface lows have traveled northeastward brought mostly non-convective severe wind gusts to parts of the British Isles. On Saturday another low is influencing that area that however is much weaker.

The most interest on that day is hurricane Leslie that is quickly traveling eastward and will probably reach the Iberian Peninsula during the night from Saturday to Sunday posing a high risk for severe and damaging wind gusts.

Looking at the current satellite images Leslie still looks well organized with a symmetric cloud shield and cloud top temperatures of almost -70 degree C. The central pressure is estimated to be around 971 hPa.
At the moment Leslie can be found to the south of the upper-level trough. It is forecasted that it should be taken up by the trough in the upcoming hours leading to a further acceleration of its movement to the east and also leading to a beginning transition into an extratropical system during the forecast period. However, models keep Leslie as a system with a tropical appearance for a long time when approaching the Iberian peninsula. It is also forecasted that the system should stay rather strong until it will make landfall. Although increasing shear and somewhat lower SSTs should normally weaken Leslie, the interaction with the through is probably the reason why its central pressure is forecasted to not rise significantly or even drop again during the night time.

The symmetrical appearance will probably disappear in the evening hours due to the aforementioned transition process. Models forecast the strongest pressure gradient to the south and to the west of Leslie. Together with the movement speed of Leslie, the regions of the southern flank of Leslie should see the strongest gusts but with that strong gradient west of the core, the whole coastline can be affected by severe wind gusts. Winds in 925 hPa are forecasted up to 50 m/s.

Ensemble forecasts show a significant probability of wind gusts in the excess of 30 m/s in the aforementioned area. Depending on the model damaging wind gust higher than 40 m/s are well possible. A few solutions also show more than 50 m/s. The risk of severe wind gusts can also affect parts of Western and Northwestern Spain although the storm is significantly weakening more inland.

There are still uncertainties in the exact track of Leslie and in the strength it makes landfall. ICON and ECMWF are the models that show Leslie making landfall at hurricane strength on a northerly course from Lisboa to northeastern Portugal. GFS, however, has a much weaker storm that is also moving on a more southerly track. However, models are getting more and more confident concerning a strong landfall.
The time of the landfall is expected to take place at around midnight (MESZ).

Although it is rather questionable if convections (in form of lightning) may develop we decided to issue an LVL3 area for the wind risk that comes from a convectively driven system that is only slowly transforming into a low with extratropical character.

Besides the wind risk, a locally excessive precipitation threat exists since the system brings a lot of liquid water. However, models do only give little hints for higher amounts of precipitation which is probably due to the rather fast movement of Leslie and the orography of the affected area. But amounts of 30 to 80 mm in a short time frame may lead to local flash floods.

Strong low-level shear together with low LCL would lead to an enhanced threat for tornados that may also be strong. This risk is highest to the south of Leslie where also notable CAPE values of a few hundred J/kg can be expected along a developing cold front. Also, a nice maximum of moisture convergence traveling eastward can be found in the models. This is the reason why the LVL2 area was extended to the south.

There will be an update on Leslie during the day.

Some convection is already present in the area of interest triggered by the upper-level low that is situated at the Ionian Sea at the beginning of the forecast period and traveling slowly eastward reaching the Thyrrenian Sea at the end of the outlook.

Rather moist air masses are present south of Sicily with values up to 14 g/kg. This moisture can overlap with moderate Lapse rates. Those Lapse rates increase towards the coast of Lybia and are advected from inland due to a southerly mid-tropospheric flow. As a result, the forecasted CAPE values are between 500 and 1000 J/kg.

In addition, a surface low is present just east of the coast of Tunisia which is strengthening throughout the forecast period due to another upper-level low that can be found over central Tunisia. East of the surface low converging surface and mid-tropospheric winds are forecasted. This results in strong moisture convergence at the eastern and northeastern flank of the surface low.

This then is the area where repeated storm formation can be expected that is slowly shifting northward during the day and first affects Malta and at the end of the outlook validity also Sicily. It is also possible the northern parts of Tunisia are affected by storms although the risk is much lower.

The main problem will probably be excessive precipitation given slow moving and back-building storms that are fed by the advection of moisture from the south. Having only low shear values hail and severe wind gusts are rather unlikely.

An upper-level low helps to build up steep lapse rates. This instability then overlaps with moderate moisture values that are advected inland of Turkey coming from the Black sea with a northerly surface flow. Concerning the southern coast of Turkey and Cyprus moisture is advected inland from the Mediterranean due to the sea breeze. CAPE values are thus highest at the south coast of Turkey and over Cyprus with 500 to locally 1000 J/kg. More inland of Turkey also a few hundred of J/kg of CAPE can be expected.

Diurnal driven and disorganized convection (lack of shear) can develop during the day. Those storms may lead to a few events with stronger precipitation. However, due to the pulsating character of the storms they should mainly stay non-severe. At the southern coast and over Cyprus the risk for excessive is somewhat enhanced due to the available higher moisture. Also, local maxima of moisture convergence can be found in the models.

A low-end LVL1 area was drawn to cover that risk. Connected to the diurnal cycle convection should decrease rapidly during the afternoon and in the night hours