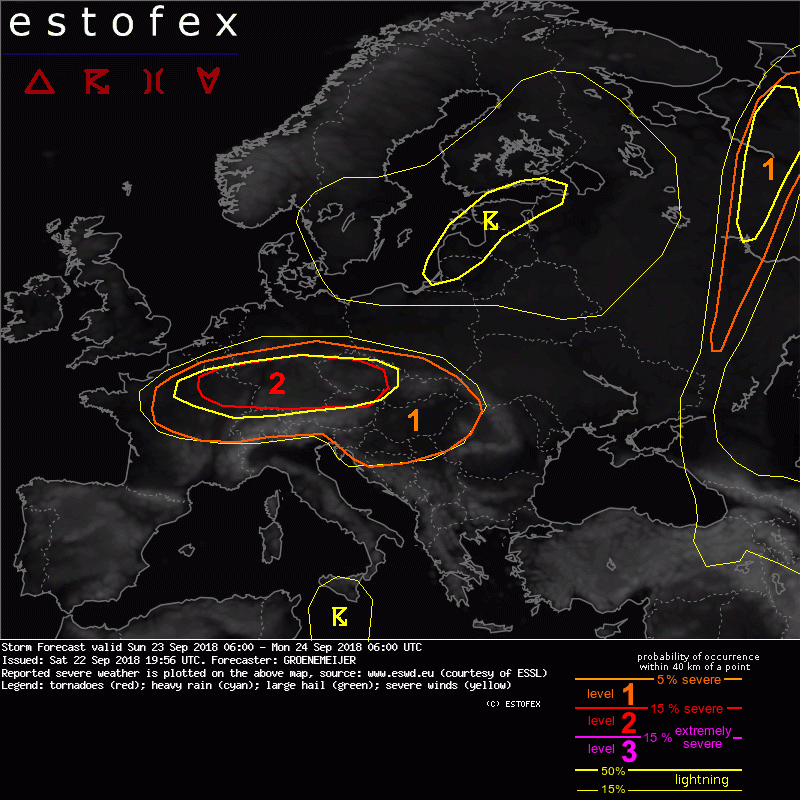 A level 2 was issued across parts of France, Belgium, Luxembourg, Germany, Czechia and Austria, primarily for severe wind gusts and to a lesser extent for tornadoes.

A level 1 was issued surrounding the level 2 area mainly for severe wind gusts.

A level 1 was issued for parts of Russia mainly for tornadoes and large hail.

Across Western and Central Europe, a shortwave trough embedded in a strong zonal flow quickly moves eastward. Ahead of this system, an initially slack area of low pressure deepens as it translates eastward. Along its cold front, a line of intense convection is expected to evolve.

Across Russia, a well-defined SSW-NNE-oriented cold front slowly moves eastward, ahead of a mid/upper-level trough. Thunderstorms are expected to develop ahead of the front during daytime.

Ahead of the trough, within the broad warm sector of a low-pressure area, humid low-level air is advected northeastward from the subtropical North Atlantic. This results in dew point temperatures in excess of 16C in places. Low tropospheric lapse rates in the warm sector are meagre, however, model consensus is that marginal CAPE on the order of 100-500 J/kg will develop as strong lift affects the air-mass ahead of the cold front.

The main risk will be severe wind gusts. It is expected that they will exceed the severe threshold of 25 m/s in many places. Very locally, 32 m/s may also be exceeded but given that this is uncertain and the coverage of such gusts will be low, a level 3 does not seem to be warranted. In addition to severe gusts, the mostly linearly organized convection may feature a number of miso/meso-vortices, which, given the very strong low-level shear, may give rise to a tornado or two. This risk is maximized closer to the low's centre where hodographs are most curved, i.e. across the northern half of the level 2 area.

Ahead of the cold front, fairly humid and mild air is advected northward by a 15-20 m/s southerly low-level flow and dew point temperatures around 14-15C are expected. In combination with fairly weak lapse rates of 6-6.5 K/km in the 850-500 mb layer, marginal instability of around 500 J/kg CAPE are expected to develop.

Wind shear is expedted to be mostly unidirectional and parallel to the front, but it should be strong with 20-25 m/s of bulk shear expected in the 0-3 km layer. In response to solar heating convection should quickly initiate during the early afternoon.

Some of the storms that develop and see a possibility to remain isolated for a while could turn supercellular and produce marginally large hail (2-3 cm). In addition, the strong low-level shear suggests that a small tornado risk exists which will diminish storms cluster, a process that should take place rather quickly.