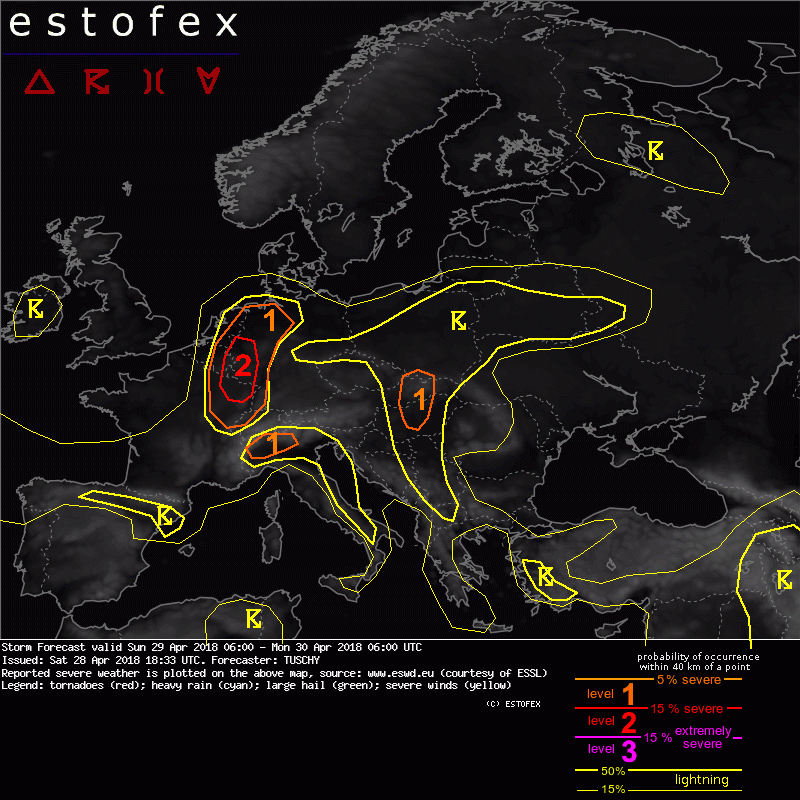 A level 2 was issued across E-France, extreme W-Germany and Luxembourg for large hail, severe wind gusts, excessive rainfall and an isolated tornado event.

A level 1 surrounds the level 2 with similar risks but lower probabilities.

A level 1 was issued across far E-Czech-Republic, far S-Poland, parts of Hungary and Slovakia for isolated large hail, excessive rainfall and an isolated tornado event.

A level 1 was issued for NW-Italy mainly for excessive rain.

Two mid/upper waves enter an upper trough over the far E/NE-Atlantic. They try to phase but seem to fail with the first one circling the amplifying trough and approaching W-Europe in a negatively tilted manner during the day. The second wave, lagging the first one a bit, results in another surge of cold mid-level air in the wake of the first one, which supports deamplification of the trough during the night and the whole vortex is about to choke off of the westerlies over the far E-Atlantic.

Downstream of the E-Atlantic trough, an extensive ridge holds steady over SE-Europe but starts to build east during the night. The W-European wave - in form of a sharp/intense short-wave trough - induces an enhanced WAA regime downstream and mid-level ridging from Germany towards the S-North Sea (starting the cut-off process). Finally a compact but stout vortex over the Ionian Sea drifts E/SE during the forecast with ongoing model discrepancies about its final path.

As the W-European short-wave interacts with a pronounced baroclinic zone over E-Spain and France cyclogenesis is forecast by all models. Environmental conditions favor modest to rapid deepening of that vortex beneath a coupled jet configuration (which converts into a dominant anticyclonic (northern) jet with its right entrance remaining anchored over the evolving vortex). Weather a shallow warm seclusion evolves over N-France or not during the night also depends on how much warm sector air can be ingested into that vortex. This plays a substantial role in a potential non-convective wind event over Benelux and surrounding areas beyond Monday 06 UTC.

A cross-alpine flow with adiabatic heating also results in lowering surface pressure north of the Alps. A zonal low pressure channel evolves and opens out into the deepening vortex along its western edge (over France).

A warm front over E-France, CNTRL-Germany and Poland lifts north during the day while the cold front, initially aligned near parallel to the background flow, speeds up to the E/NE over W-Germany during the night in the wake of the deepening French vortex.

The main area of concern arises in the thinning warm sector over E-France, W-Germany into Luxembourg and E-Belgium. Model consensus isnÃ¢â¬â ¢t yet perfect regarding intensity and track of surface depression. After decaying morning convection (isolated severe is possible), subsidence supports temporal diabatic heating during the afternoon.
As the synoptic forcing arrives during the evening from the south, scattered warm sector convection erupts over E-France, which spreads north. Dependent on the depression's placement, a spatiotemporal overlap of strong shear (20 m/s 0-6km, similar 0-3 km shear and 200 J/kg SRH3) , gradually diminishing weakly capped 0.5 to 1 kJ/kg MLCAPE and augmented LL shear exists. Initial storms pose a supercell risk with large hail, severe wind gusts and an isolated tornado threat. Overall shear vectors remain aligned near parallel to the eastbound moving cold front, so rapid clustering is forecast - swaths of severe wind gusts are possible with a rather dry/well mixed subcloud layer and enhanced 0-3 km flow. Any MCS could push further north as currently anticipated (e.g. all the way towards far S-North Sea). Again, outflow boundaries, laid-out by morning convection could push the risk for CI further east than currently anticipated in numerical guidance.

During the night, an ongoing occlusion process beneath intense upper divergence creates a supportive environment for slow moving/temporal training clusters over NW-Europe with an extensive rainfall risk (beside an ongoing but gradually diminishing hail and severe wind gust threat). During this time-frame, localized CI is also possible over N- and NE-Germany along the northward sliding warm front with adequate shear/MUCAPE for a localized large hail event.

Excessive rain in the evolving deformation zone of the depression over the English Channel and surroundings is also anticipated during that time-frame, but this activity remains mostly avoid of thunderstorm activity.

The northward lifting warm front leaves a modestly unstable and weakly sheared warm sector behind. During late afternoon/evening, orographic convection occurs over a broad area and drifts north while clustering. Slow storm motion and rich BL moisture/CAPE pose a localized excessive rainfall and isolated large hail risk. With LL shear uptick during the evening, a small window of opportunity exists for an isolated tornado event mainly over the far E-Czech Republic, far S-Poland, parts of Hungary and Slovakia, where LCLs remain below 1000 m. This activity gradually decays during the night.
Another focus for CI will be the warm front over NE-Poland with active nocturnal thunderstorm activity. Despite mainly elevated nature, 10-15 m/s DLS and 400-800 J/kg MUCAPE assist in isolated large hail and mainly excessive rain with clustering/slow moving convection.

Over the rest of Italy, convection bound to the orography evolves in a moderate CAPE- weak shear environment. Slow moving storms bring localized heavy rain and large hail. This risk diminishes beyond sunset.

A similar risk exists over SE-Europe.