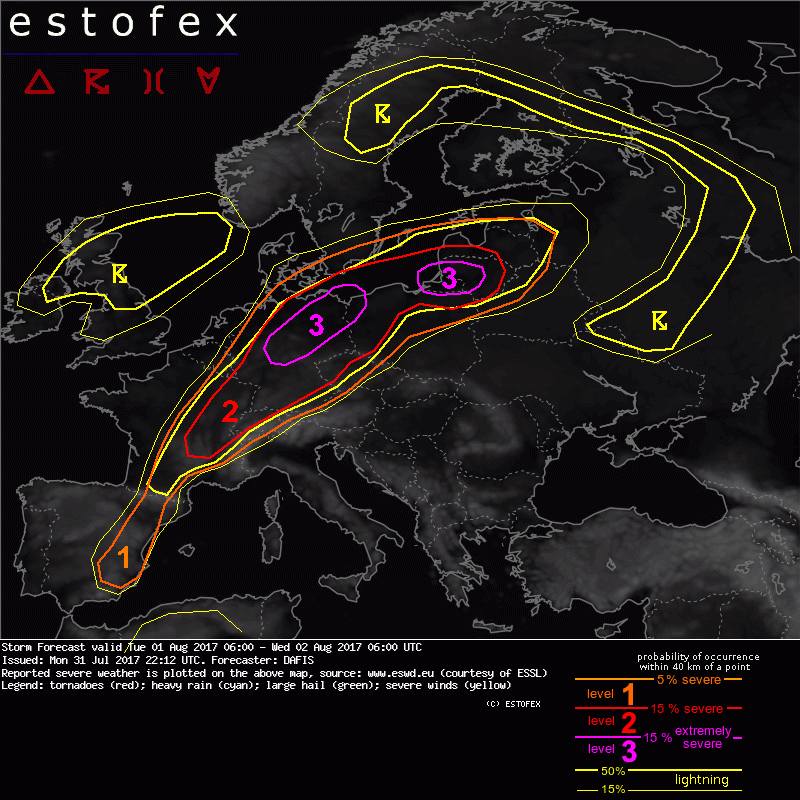 A level 3 was issued for Germany and NW Poland for severe to damaging wind gusts, large or very large hail, excessive precipitation and strong tornadoes.

A quasi-stationary frontal boundary is found ahead and around the extensive ridge, stretching from N Spain towards the Baltic States. A vigorous mid-level jet is forecast to cross Germany, Poland and the Baltic States during the passage of fast-moving short-wave trough. The air masses converging on the aforementioned boundary along with the upper-air dynamics should create a potentially dangerous environment during Tuesday and the early morning of Wednesday. For this reason, two level 3 areas were issued to address the anticipated severe weather risks. For the rest parts of the continent, some convective phenomena are expected in the British Isles and in Scandinavia, but risk threat for severe weather events is limited.

Ongoing convective activity from the previous night will create a shield of clouds over northern Germany in the morning that is expected to become less thick until 12z. The highly unstable tropical air mass at the leading edge of the ridge, with elevated mixed layer, will create large amounts of MLCAPE up to 2000  3000 J/kg. A sharp gradient of mid-level geopotential will lead to enhanced DLS between 20-35 m/s, overlapping with high CAPE values. Widespread CI is expected in Germany along the main convergence zone where significant SREH0-3km indicate that most of the storms will become supercells able to produce very large hail and tornadoes. Diurnal heating and local convergence zones will first provide enough lift for discrete cells to form and then organize into clusters (MCS). Several scenarios from high-resolution models suggest the development of a QLCS, with NE-ward bowing structures that will be capable of producing severe to damaging wind gusts. Inside level 3 area, veering wind profiles with strong LLS configuration and very low LCLs increase the potential of tornadogenesis, with some strong tornadoes (F2 or stronger). During the night, a short-wave trough will provide additional lift and a new round of multicellular systems is expected to cross N Germany, entering NW Poland. Excessive precipitation, severe wind gusts and tornadoes will be the main threats. In northern parts of Poland, diurnal heating seems that will not be able to provide enough lift, due to note-worthy CIN values, this is why a level 3 was excluded.

This area of interest is another hot-spot for severe DMC during Tuesday. Between 12z and 15z, discrete storm cells can become supercells as DLS will exceed 20 m/s and forecast hodographs show LL air masses with strong helicity and shear. These storms will be able to produce large hail, severe wind gusts and tornadoes. A second round of severe storms is expected during the night, as a MCS from the Baltic Sea is forecast to cross the area, ahead of the short-wave trough axis. Very steep lapse rates can pose a threat for large hail and severe wind gusts even during the night, but the main threat will be excessive precipitation as training convection is simulated by most NWP models.

The widespread overnight elevated convection is expected continue affecting a large part of France. Diurnal heating will provide lift for new cells in the afternoon, propagating E- NE. The highly sheared environment, the moist PBL, the steep mid-level lapse rates and the high PW values increase the probability for storms to become severe and produce all kinds of severe events. The enhanced SREH0-3km suggests that storms will acquire rotation and become supercells. Any supercell storm will be able of producing large hail and damaging wind gusts. In addition, strong LLS indicates that a risk of tornadoes will exist.

A level 1 was issued for parts of Spain where strong DLS and some 1000-2000 J/kg CAPE are expected, under a relatively strong cap. If an isolated storm develops, it may quickly turn into a supercell producing large hail and severe wind gusts.