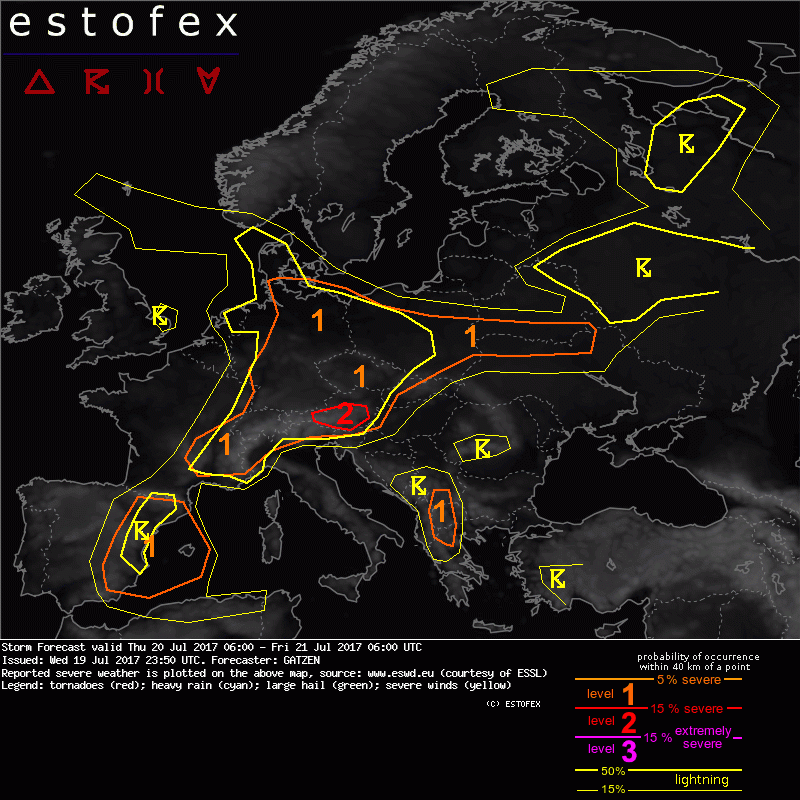 A level 2 was issued for southern and central Austria mainly for excessive precipitation and to a lesser extent large hail and severe wind gusts.

A level 1 was issued for Germany, Denmark, western Poland mainly for excessive rain and to a lesser extent large hail and severe wind gusts.

A level 1 was issued for central Poland into northern Ukraine and southern Belarus mainly for tornadoes, large hail, and severe wind gusts.

A level 1 was issued for eastern Spain mainly for large hail and severe wind gusts.

A level 1 was issued for the southern Balkans mainly for large hail and excessive precipitation.

A well-developed cut-off low will establish over the British Isles on Thursday. Ahead of it, a mid-level vort-max spreads across northern France into southern Scandinavia. Along the base of the trough, further vort-maxima are expected to affect Iberia, southern France, and the Alpine region. Two further troughs are located across north-eastern Europe and over the western Black Sea. At low levels, moist air masses are expected along a frontal boundary from southern France to the Alps into Poland and eastern and northern Germany and Denmark. It partly overlaps with steep lapse rates. Rich moisture will also spread into eastern Spain.

Along a frontal boundary, rich low-level moisture is present. Lapse rates will increase due to diurnal heating and CAPE around 1000 J/kg is likely in the afternoon, although mid-level lapse rates are limited. Storms are expected to go on in the morning hours and re-development is forecast during the day. Main activity is forecast to spread from western / central Germany towards north-eastern Germany in the afternoon, another region with enhanced activity is forecast from the Massif Central to the Alps and further into the Czech Republic.

With 0-6 km and 0-3 km vertical wind shear about 10 to 15 m/s, main convective mode will be multicells that merge to clusters and squall lines. These will pose a threat of excessive rain, especially across north-east Germany and central and southern Austria. Stronger multicells can also produce large hail, while the potential increases to the south, with largest hail threat across the Alps and Massif Central. Severe wind gusts are also not ruled out, especially with bowing segments and storm mergers as well as with stronger downbursts in the southern parts. Activity will spread east in the night hours where it slowly decreases.

A warm front stretches across Poland into Ukraine. Mid-level ridging spreads across the warm front, but isolated storms cannot be ruled out. Strong low-level vertical wind shear along the warm front of more than 10 m/s in the lowest km and quite rich low-level moisture indicate a risk of tornadoes if supercells can form. Deep layer vertical wind shear is pretty limited, though, with about 15 to 20 m/s. Main risk is with storms that can ride the warm front and remain in the most favourable environment for some time. These storms may also produce large hail and severe wind gusts.

Sea breeze from the east will cause strong moisture advection onshore, overlapping with steep lapse rates from the west. CAPE about 1000 J/kg is expected. Approaching vort-max in the afternoon will weaken the cap and initiation becomes likely over mountains. Strong deep layer vertical wind shear of more than 20 m/s will support supercells, capable of producing large hail and severe wind gusts. Storms are expected to spread across the west Mediterranean during the night when stronger storms can still produce large hail until the end of the forecast period.