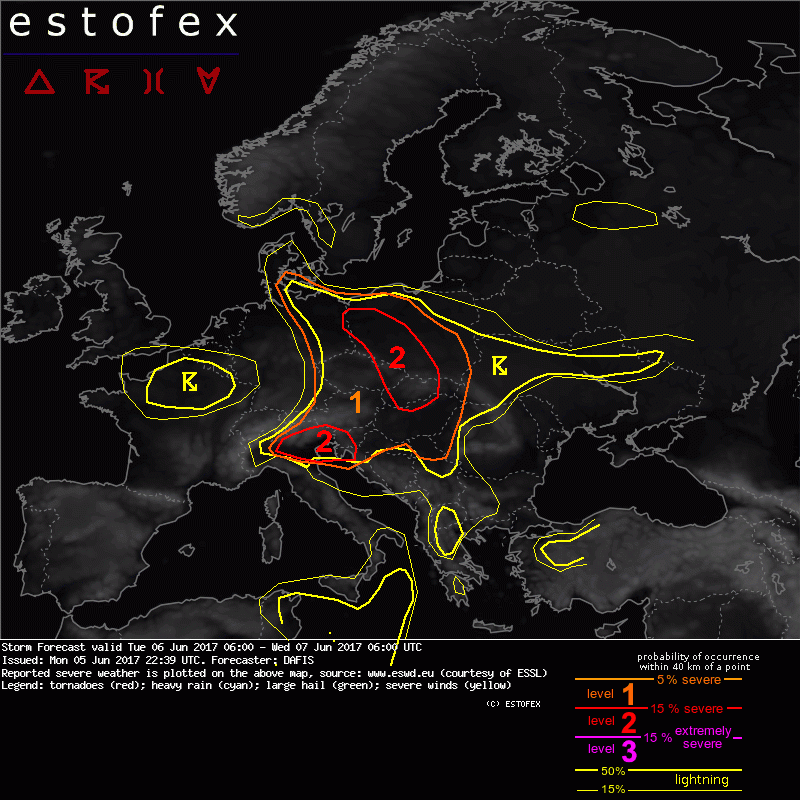 A level 1 covers a large part of Central Europe for the same threats with less coverage probability.

A negative-tilted long-wave trough is expected to cross France until the early morning of Tuesday, followed by a strong tropopause folding with a dry slot. This feature is associated with a strong depression near the surface over the UK, gradually deepening to 988 hPa with a pronounced baroclinic zone moving east towards Central Europe. Phase diagrams suggest a transformation towards a shallow warm-core vortex as an occlusion is about to be wrapped around. Two main front zones will be of our main interest: the warm front of the over Poland and the following fast-moving cold front that is now found in NW France (2200z).
Over Central Mediterranean a cut-off low travels east providing lift to already unstable air masses, and another cut-off low over Turkey gradually vanishes while moving NE, but before it disappears, it will create a favorable environment, along with LL WAA in SW Russia, for MCSs and supercells, just outside our domain.

Diabatic heating in the morning should result in scattered clusters of storms, which can be organized into supercells as the through approaches from the west, increasing the vertical wind shear. Veering wind profiles create enlarged hodographs over Poland increasing the threat for some well-defined supercells, producing severe wind gusts and excessive rainfall. Weak mid-level lapse rates should lessen the hail risk, but several areas can experience large hail up to 3cm. In S Poland, S Slovakia and N Hungary the main threat will be excessive rainfall from slow-moving storms. Moreover, tornado risk is increased in the warm sector of the northbound moving front as the LCLs are calculated to fall below 1km in the afternoon and LLS exceeds 10 m/s with SREH0-1km in the range 150-250 m^2/s^2. Several areas inside the level 1 have enhanced probabilities for funnels or isolated tornado reports as LL CAPE is forecast in convergence zones. Storm activity may continue during the night in E Poland, Ukraine and Romania with a decreased threat level of severe phenomena.

As the leading edge of the sharp mid-level trough approaches, strong SW-erly flow in N Italy increases the already high BL mixing ratios. South from the Alps steep mid-level lapse rates will overlap with some hundreds of CAPE. High resolution WRF solutions suggest that DLS will oscillate between 15 and 30 m/s, creating a favorable environment for 1 or 2 supercells, producing large to damaging large hail and severe wind gusts. Even though storms will be fast-moving, excessive precipitation events are also expected from training convection. Tornado risk is increased in the afternoon especially near the Adriatic coasts of Italy and Slovenia where LL convergence zones can also increase the LLS.