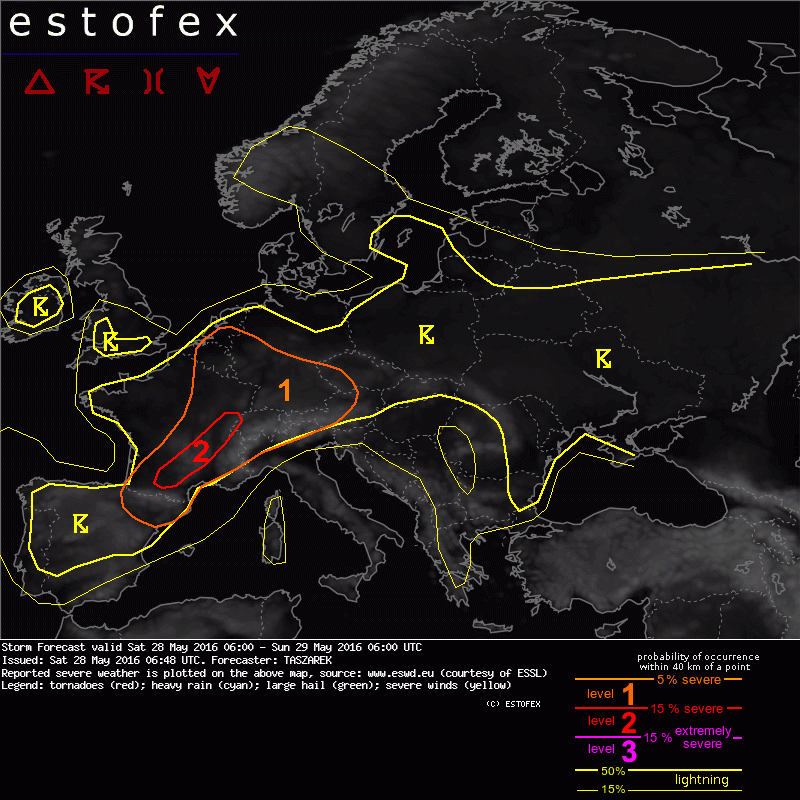 A level 2 was issued for S France mainly for large hail and severe wind gusts.

A level 1 was issued for part of W and CNTRL Europe mainly for large hail, severe wind gusts and in lesser extent for excessive precipitation

Omega pattern over Europe start to weaken and allows a passage of the cooler air masses from Atlantic. An eastwardly moving long-wave trough is located NW from Iberian Peninsula while weakening long-wave ridge covers Italy and W side of Balkan Peninsula. An eastern trough of omega-shaped pattern broadly covers Turkey and Black Sea. Scandinavian high covers N Sweden and Finland. While weak horizontal pressure gradient dominates over whole Europe, a mid-level jet streak encircles trough and stretches from Azores, trough Gibraltar, E Spain, and eases off near N Italy. A position of the trough favours S, SW advection of warm and moist air on its eastern flank to France, Italy, Switzerland and part of CNTRL Europe. Due to persisting from the last days a strong diurnal heating with evapotranspiration and warm air advection, a high theta-e is overspreads W, CNTRL, E and S Europe and thus creates good conditions for a widespread convection in a low-sheared environment. Severe thunderstorms are expected in areas where a left-exit of the jet provides upward motion and higher shear with better storm organization.

An approaching long-wave trough creates the highest threat for the severe weather in its eastern flank where an increasing instability with warm air advection and steepening of the lapse rates overlaps with QG-lift and increased wind shear. Most of the area covered with level 1 threat zone contains low-level mixing ratios exceeding 10 g/kg along with mid-level lapse rates over 7 K/km. Such combination with diurnal heating creates a weakly capped 1000-2000 J/kg CAPE that overlaps with 15 to 20 m/s DLS over S and E France, Benelux, W Germany, Switzerland, N Italy, Austria, Czech Republic and E Adriatic countries. Although convection over W Balkan Peninsula will be strongly capped and unlikely to initiate, a widespread CI is expected over W, CNTRL and E Europe. A 15 m/s DLS in level 1 threat area should organize convection into multicell clusters capable of producing large hail and severe wind gusts. A few isolated supercells in areas with locally enhanced SRH and clear SE moist inflow are also not ruled out. A lowering pressure on the eastern flank of the trough will most likely create a meso-low/trough over CNTRL France in the afternoon hours. On its SE edge there is a chance that converging winds and SE low-level inflow will jump SRH to 100-200 m2/s2 and provide better conditions for supercell thunderstorms capable of producing large to very large hail (especially considering high LCLs and steep lapse rates) and severe wind gusts. However, due to an M-shaped hodograph, it is expected that initial supercells will be more likely to cluster and organize into MCS that may develop over S France and move until the evening hours to W Switzerland. Within such system a main threat will shift to severe wind gusts. A level 2 threat field marks SE edge of the meso-low where severe thunderstorms will be the most likely. Increasing LLS in the evening hours will create a possibility of tornado, but due to unfavourable convective mode and rather low values of SRH a threat is very limited. Storm clustering into multicells and PW exceeding 25mm creates also a risk of excessive precipitation and local flash flooding.