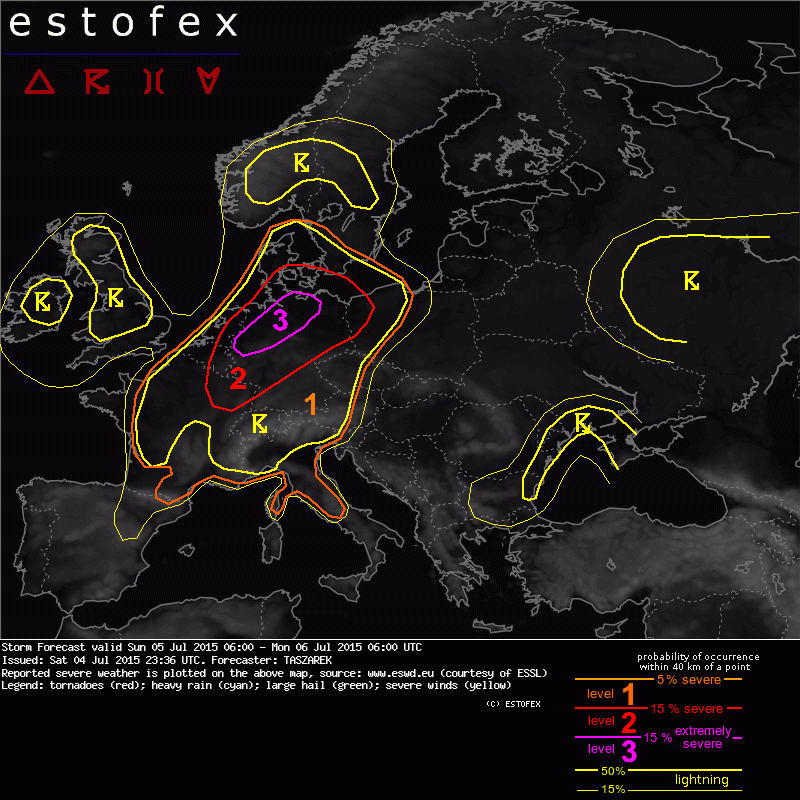 A level 3 was issued for N Germany mainly for the damaging wind gusts, large and very large hail, tornadoes and excessive precipitation.

A level 2 was issued for parts of Benelux, NE France, S Denmark, NW Poland and parts of Germany mainly for the damaging wind gusts, large and very large hail, tornadoes and excessive precipitation.

A ridge with warm and moist tropical air is stretching from Morocco up to Central Europe. Extensive trough with cold front passing through W Europe is placed over N Atlantic. Another trough is placed over NW Russia and provides advection of cold air mass into NE Europe. Most of the S, SE and E Europe is covered with the weak gradient of geopotential and SLP field. The main jet streaks lie over the N France, Northern Sea, N Sweden, Finland and NW Russia. Jet with strong winds at 700 hPa extends from N France up to N Germany. Particularly severe weather is expected in the late afternoon hours over Central Europe where the good overlap of instability, wind shear, moisture and lift will take place.

It is predicted for tomorrow that within highly unstable tropical air mass with high boundary layer's moisture content (mixing ratio: 13-14 g/kg) and elevated mixed layers from Spain (> 7 C/km) the SB CAPE values in the afternoon hours will reach up to 3000-3500 J/kg. A sharpening gradient of SW flowing mid-level geopotential will cover N France, Benelux and N Germany with DLS up to 20-25 m/s providing significant CAPExSHEAR values. A short wave trough that will provide a great source of lift is predicted by the NWP models to pass through this region in the late evening hours. Apart from that, models are also indicating a thermal low that will develop over NE France and move through Luxemburg up to N Germany will keep surface winds backed. Converging winds along the axis of the trough will provide another source of CI. Since CI within the area of the high shear and instability areas is predicted to be widespread, we issue a level 3. Strong SW flow in mid-levels with locally S and SE inflow of warm and moist air will create a SRH that may reach up to 300 m2/s2 and support the occurrence of dangerous supercellular thunderstorms. SWerly winds at 700 hPa (> 20 m/s) that will be perpendicular to the storm line create also very good conditions for the formation of QLCS that may be capable of producing damaging wind gusts.

Current understanding is that CI will take place in the late afternoon hours over NE France, W Germany and Benelux within the convergence line. From the beginning, the isolated supercells may be capable of producing very large hail and tornadoes. Later on, storms due to a strong lift and shear will cluster into an organized squall line that is predicted to pass through the N Germany. It is likely that such a squall line will contain bow echos and the wind gusts within these may exceed 33 m/s. Since overlap of thermodynamic and kinematic conditions look impressive, the derecho with extreme wind gusts cannot be ruled out. In the southern flank of the storm line, convective mode may remain isolated and thus supercells producing very large hail and tornadoes in central Germany are possible. Supercells are also possible in the N Germany, Benelux and Denmark where they may occur in the front of the squall line. Tornadoes and very large hail are likely if these storms will form. Especially in the evening, when the convective mode will remain isolated and relative humidity will be increasing and thus decreasing the LCL, tornadoes threat will increase. It is difficult to predict in which direction the MCS will exactly move in the evening hours. Some of the models predict it to pass through the Denmark while some forecast that it will enter W Poland. In this forecast, two of these scenarios have been taken into account. The threat degree for the severe weather phenomena occurrence should drop in the night hours when the convection will become elevated.

In the weakly sheared environment, no good storm organization is predicted. However, locally the high CAPE values (up to 4000 J/kg) may itself create a risk for the occurrence of the large hail and severe wind gusts within the pulse thunderstorms. Since storm motion is weak and the PW values are very large (>40mm), excessive precipitation and local flash flooding cannot be ruled out, especially in the NW Italy and S Germany.