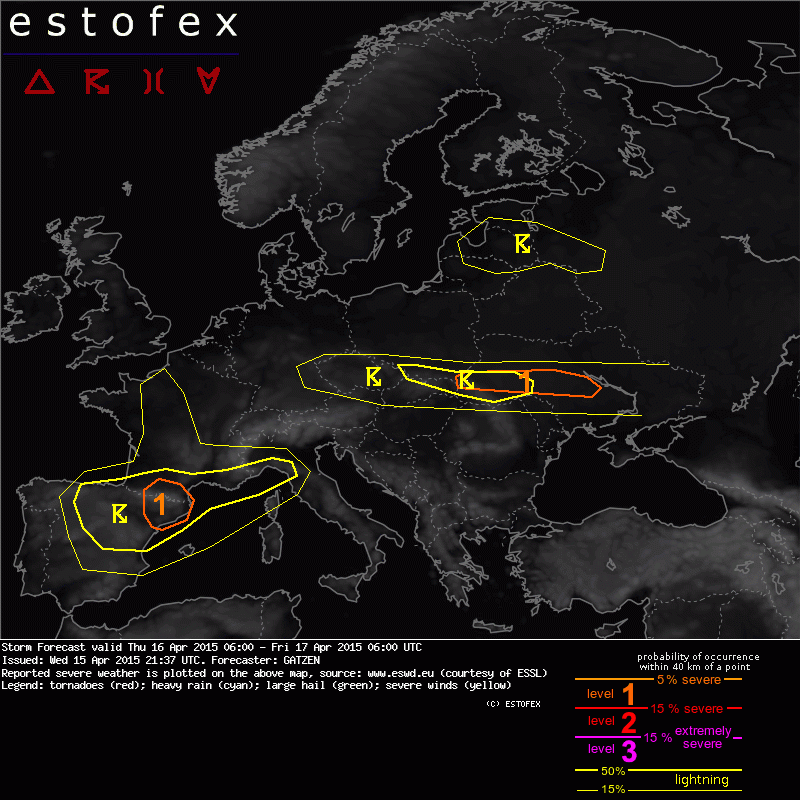 A level 1 was issued for the central Ukraine mainly for large hail and severe wind gusts and to a lesser extend tornadoes.

A level 1 was issued for north-eastern Spain and southern France mainly for large hail.

A large polar trough extends across Scandinavia and slowly amplifies into central and eastern Europe. A weak cut-off low spreads north-east across the Iberian Peninsula.

A strong mid-level jet is present at the southern flank of the Scandinavian trough from N Germany to the Ukraine and Russia. A warm air mass is present to the south of the frontal zone. Latest soundings indicate steep low-level lapse rates up to 800 hPa. Given moisture convergence south of the slowly progressing cold front that overlaps with the steep lapse rates some thunderstorms may evolve on Thursday afternoon and evening. The focus will be western and central Ukraine with the coldest equilibrium level. As vertical wind shear is around 10 to 15 m/s in the lowest 3 km, organized storms are expected, with the main threat of severe weather across the Ukraine. Large hail and severe wind gusts are forecast with the stronger multicells or supercells. As low-level vertical wind shear is rather strong (8 m/s 0-1km bulk shear) across the Ukraine, tornadoes are not ruled out. Storms are forecast to weaken after sunset.

Widespread deep moist convection is forecast near the trough axis of a cut-off low due to a moist and rather unstable maritime air mass. Weak vertical wind shear limits severe potential, but the stronger storms are expected to produce large hail and excessive rain. Best chance for supercells is across north-eastern Spain where low-level easterly sea-breeze/upslope flow can enhance low-level vertical wind shear. Large hail is expected to be the main threat in this area as well.