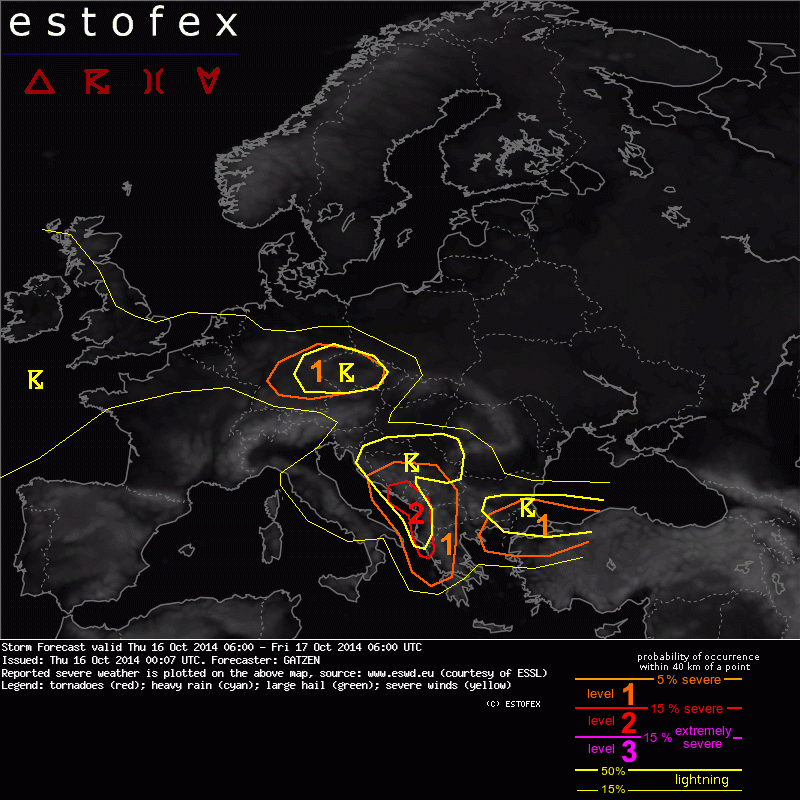 A level 2 was issued for the eastern Adriatic Sea region mainly for excessive precipitation and to a lesser extend tornadoes, large hail, and severe wind gusts.

A level 1 was issued for the southern Balkans to northern Aegean Sea region mainly for excessive precipitation, large hail, and tornadoes.

A level 1 was issued for southern and central Germany into the Czech Republic mainly for tornadoes.

A long-wave trough west of Europe yields a string westerly flow during the forecast period. Several intense short-wave troughs will travel across western and central Europe. To the south, another trough moves over the Balkans ahead of ridging over south-western Europe. At lower levels, moist Atlantic air spreads into Europe. The Mediterranean is also affected by very moist air that overlaps with steep lapse rates over the Balkan area.

A short-wave trough moves east during the period and crosses the Balkans. Ahead of this trough, an elevated mixed layer is advected eastward. Below the inversion, plentiful moisture was sampled by latest soundings over the Adriatic and Aegean Sea region, yielding CAPE in the order of 2-3 kJ/kg (Trapani). The capping inversion is expected to erode from the north due to QG forcing and a cold front moving into the Balkans during the day. Initiation is most likely where upslope flow of the moist air is present ahead of the cold front.

Storms that form will likely organize given strong vertical wind shear in excess of 20 m/s in the lowest 6 and 15 m/s in the lowest 3 km. Back-building MCSs are expected to move south along the coasts of the Balkans, capable of producing excessive rain, large hail, and severe wind gusts. Low-level vertical wind shear of 10 m/s indicates a risk of tornadoes as well. Farther inland, surface-based storms will become unlikely due to weaker moisture, but elevated storms may still produce some hail and strong rain. Convective activity is expected to spread eastward during the day affecting the northern Aegean and Black Sea region. Overlap of storms and vertical wind shear will decrease in the north-east, but a few severe storms are not ruled out, though.

Over the northern Balkans, storms are expected near the center of the short-wave trough during the afternoon. Weaker vertical wind shear will limit severe potential. However, a tornado is not ruled out given rather rich low-level moisture and up to 10 m/s low-level vertical wind shear.

A moist air mass spreads into southern Germany on Thursday. In the wake of a short-wave trough, some showers and thunderstorms may develop during the noon hours, spread eastward. These storms may become mesocyclones given around 10 m/s 0-1 km bulk shear and favourably veering low-level profiles. This points to a threat of tornadoes especially with isolated supercells. Marginally severe hail and severe wind gusts are not ruled out, before the activity moves east and severe potential decays after sunset.

Ahead of the Atlantic trough, moist air masses are present. Ahead of a short-wave trough moving eastward in the afternoon and evening hours, scattered showers and thunderstorms are expected. With rather good low-level vertical wind shear, tornadoes are not ruled out. A clear focus of convection is missing, and main QG lift will set in too late in the day, when low-level inversions are expected. Therefore, a threat level is not issued.