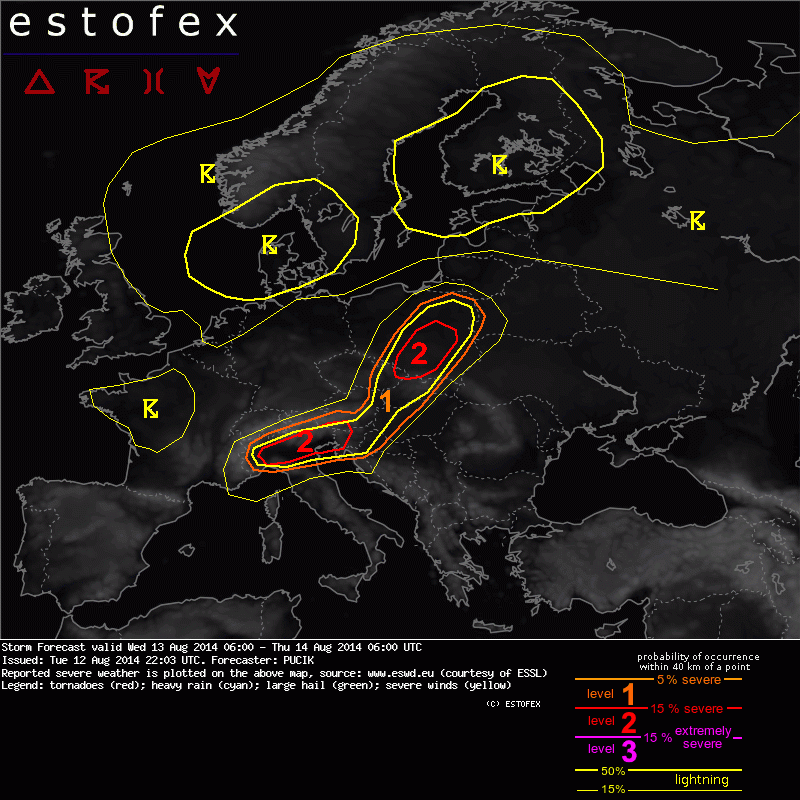 A level 2 was issued for S to Central Poland mainly for severe wind gusts, tornadoes and excessive precipitation.

A deep cyclonic vortex is forecast to remain located over the Norwegian Sea, filled with cold airmass at mid troposphere. Towards the south, at the base of the vortex, a short-wave trough will rotate around it, its axis translating from France towards Germany, Alpine region and Czech Republic. Trough will be embedded in seasonably trong mid-level flow, yielding windspeeds between 20 and 30 m/s.

Two foci for DMC are expected. The first being the NW and N part of Europe, with steep lapse rates induced by cold mid-tropospheric temperatures. These storms will mostly form in weak wind profile, but may locally cause heavy precipitation or small hail. Near the coastlines, waterspout events are not ruled out either.

The second one will be a wavy frontal zone with cyclogenesis processes. Storms may form along in a belt from N Italy towards Poland, under strong vertical wind shear. This zone will be discussed in detail below.

Surface observations as of Tuesday evening reval moist airmass over the area with dewpoints between 18 and 22 deg. Udine 12 UTC sounding shows a deep, moist profile with strong vertical wind shear. During Wednesday, QG-lift from approaching short-wave trough should aid in the destabilisation, which will be supported also by moisture advection from the sea. Marginal to moderate latent instability build-up is simulated with CAPE values possibly exceeding 1000 J/kg, namely over the Friuli-Venezia region.

Widespread DMC initiation is expected, especially close to the Alps, as the short-wave crosses to the north of the region. Some convection, particularly over the western part of the area, may be present even during the morning hours. As storms will form in strong vertical wind shear, with DLS values from 20 to 30 m/s, there will be a high chance that they organise into the supercellular form or a bow echo, capable of large hail and/or severe wind gusts. Enhancement of the LLS towards the evening also points to the tornado threat, especially over the northern Adriatics. Here, with low developing over N Italy, a strengthening low-level jet may result in a fast growing MCS. If we take into account PW values over 40 mm, locally very high precipitation values will be possible.

A level 2 is introduced due to the expected high coverage of DMC, which may be capable of all types of severe weather.

A warm front is expected to lift across the region during the day, with warm air and moisture advection in its wake. Precipitation and low level cloudiness may inhibit solar radiation during significant period of day, especially over northern and northwestern part of the area. While GFS remains with marginal instability, ECMWF simulates over 1000 J/kg over much of Slovakia and SE Poland towards the evening and night hours. With surface cyclogenesis to the north of the Alps, a new frontal wave will quickly translate from Austria towards Poland. To its east, 850 hPa flow will increase up to 25 m/s. Combined with easterly to southeasterly surface winds, very high SREH values, exceeding 300 m2/s2 in the 0-3 km layer are expected, particularly over Poland in the evening and night hours. Thus, conditions will be very conducive to well organised DMC and in case supercells form in the warm sector, or along the warm front, significant tornadoes will be possible due to the combination of very strong low level shear and low LCLs. Another possible development could be a fast travelling bow-echo along the warm front, with severe wind gust and excessive precipitation threat.

However, models are in disagreement regarding the placement of precipitation. Some of the local models produce very little, if any precip in the warm sector. Furthermore, the best shear and initiation will take place in the late evening and night hours, when boundary layer will slowly stabilize. This may limit the tornado threat even if convection manages to develop in the warm sector. For parts of Poland, where the the conditions look most favourable, a Level 2, albeit very questionable, is introduced.