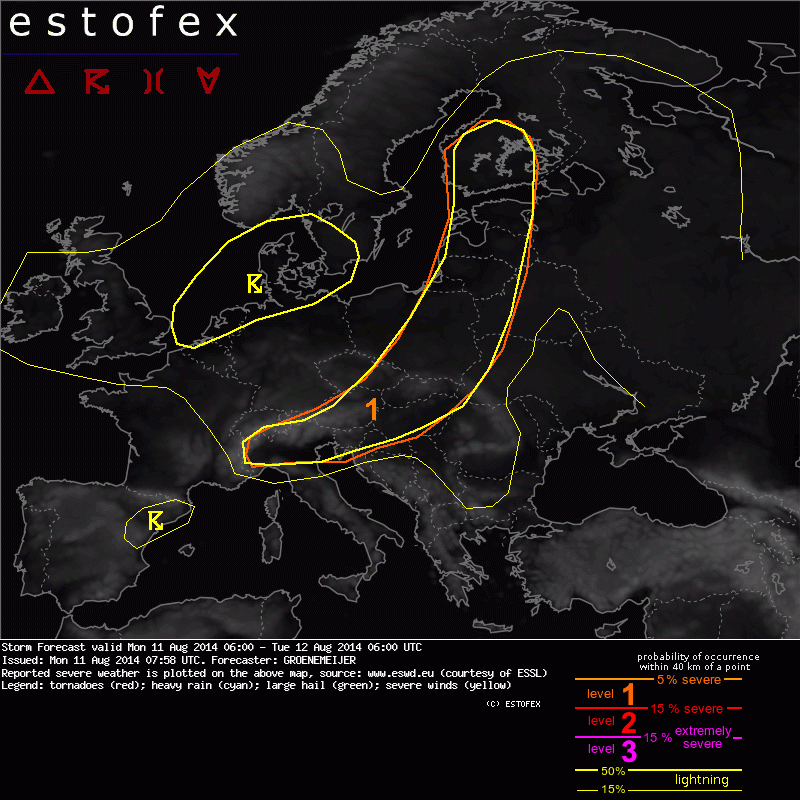 South of a mid-/upper-level low over the northern North Sea, a very strong (25-35 m/s @ 500 hPa) almost zonal jet is present. A cold front that initially stretches from the Baltic Sea across western Poland to the Alps and northern Spain.

Ahead of the front, a zone of very humid air has formed with dew point temperatures of almost 20 C or even slightly above observed at 0600 UTC. The soundings throughout the area show rather poor low to mid-level lapse rates so that only weak to moderate instability (1000 J/kg MLCAPE) will probably form during the course of the day.

It appears likely that a number of well-organized multicells will form, and some supercells not ruled out as interact with 15 m/s deep-layer shear. These storms should be able to produce some (2 - 5 cm) hail, localized severe winds and very heavy rainfall.

Across northern Italy, deep-layer shear should be stronger (20-25 m/s), but the coverage of storms, so that we refrain from issuing a level 2 for that area.

Widespread convection will occur across the southern North Sea and southern Scandinavia. The rather strong low-level wind field will limit the risk of waterspouts, but quite intense storms should be able to form. Some mostly small hail may occur.