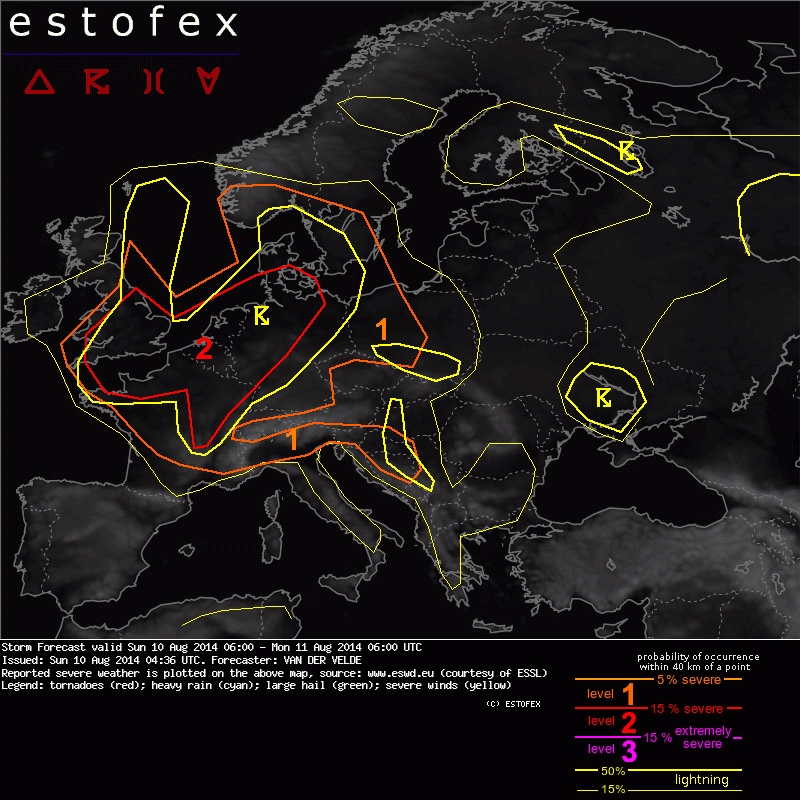 Remnants of ex-tropical cyclone Bertha reach the southwestern UK this morning. It is undergoing cyclogenesis in a baroclinic environment and will assume classic extratropical cyclone features with well defined fronts. The occlusion point is predicted to move from Wales to Yorkshire and then northward, while the surface cold front will push eastward into France, reaching Germany by 21Z (GFS 18Z run), approaching Poland, Sweden and Norway by 03-06Z the next day. The warm front is advected northward from Belgium at the start of the period and should have reached central Denmark by 18Z. The cold front is much better defined at mid levels, running ahead of the surface cold front, enabling a narrow zone with dry/cold mid levels over moist low levels harbouring potential instability. Indeed, the GFS model shows this zone to have a CAPE similar to the warm sector. The magnitude of MLCAPE is not so large, however: 300 to 700 J/kg. This is caused by mid level lapse rates hardly better than neutral in range of the cold front. Deeper into eastern France and Germany steeper lapse rates are found. The cold front is supported by the advection of a PV anomaly which should cause strong lifting over southern UK, NW France, Benelux, NW Germany and southern Scandinavia.
The situation allows for highly organized convective storms thanks to the strong linear forcing and the presence of strong vertical wind shear.

In the morning hours the low reaches land with a few hundred J/kg predicted by GFS, a lobe of PV, the split-level cold front and very strong 0-1 km vertical shear of 12-17 m/s with large circular model hodographs in low levels. Higher resolution WRF models place 500 m²/s² of 0-3 km SREH east of the occlusion point. This helps organize storms into supercells. Cloud bases will be very low, which together with the shear environment is favorable for tornado development. The threat continues for half the afternoon. As low-level shear is similar over NW France, with >250 m²/s² SREH, tornado chances will be elevated there as well. The linear forcing at the cold front could mean that a linear convective system may already form, with bowing line segments posing risks of severe wind gusts.

A large area with predicted 0-1 km shear vector magnitudes of 15-18 m/s, 0-6 km shear of 20-25 m/s and very humid, neutral lapse rate airmass with BL mixing ratio 10-12 g/kg and MLCAPE locally over 500 J/kg is found along and east of the cold front. The mean wind speed at 1-4 km altitude is just short of 25 m/s. The lifting action of the PV intrusion in synergy with CAPE and favorable shear environment should lead to a fast-moving squall line with bow echo structures, with widespread damaging wind gusts (generally 20-30 m/s). Locally very severe gusts may be observed in some bow echoes or in supercell downdrafts given also the high precipitation load in this environment and also the mixing in of mid level dry air behind the upper cold front creates a strong downdraft potential(delta-theta-e 15-20K).
A moderate tornado potential is present with such strong low-level shear. Tornados may be produced from embedded mesocyclones in a linear system or from discrete supercells ahead of the line. An isolated strong tornado may occur. Isolated large hail may be observed, the low cloud bases and limited upper level buoyancy are counteracting the otherwise supportive environment with mesocyclonic updrafts.
The best forcing passes over Netherlands and northwesternmost Germany. Towards central Germany, weaker forcing is present, but similar shear conditions, with less strong flow. Higher LCLs and steeper lapse rates contribute to better chances for large hail, while severe gusts and tornadoes are also quite likely.
Meanwhile (18Z), the warm front over S/E Denmark seems to be associated with low level convergence and can trigger high precipitation storm clusters and discrete supercells, given 300 m²/s² of 0-3 km SREH predicted (GFS 18Z run). Later the cold front squall line will come in from the southwest with mainly severe gust chances. These threats continue during the night into Norway and Sweden, but as CAPE dwindles and parcels become elevated the threats subside gradually.

Models indicate a dual low level convergence line system, one over northern France into Benelux, the other from central France into western Germany. As LCLs are higher and lapse rates steeper, without direct forcing by the trough as occurs in the northwest, a number of more isolated discrete supercells or lines could form with more potential for large hail. This area is south of the strong low-level shear region, although it is still 7-12 m/s with still some tornado chance as well.

Higher MLCAPE of 1000 J/kg is predicted as result of good lapse rates, together with decent 10-12 m/s deep layer shear allowing quite strong updrafts for large hail growth. These areas do not have clear lifting mechanisms other than orography.