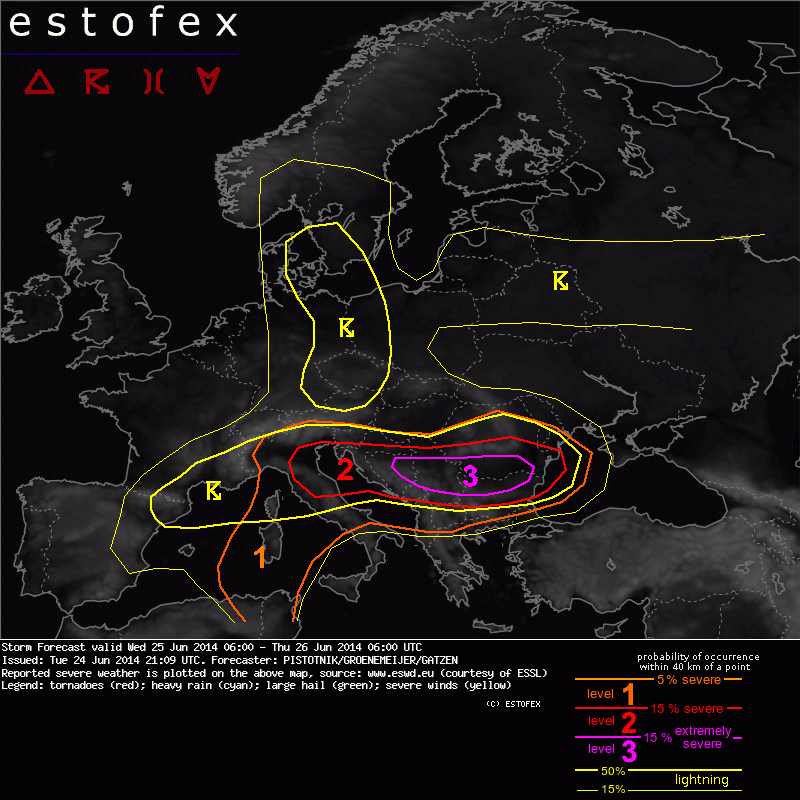 A level 2 and level 3 were issued for Central Italy across the Central Balkans into much of Romania and Bulgaria for severe wind gusts, large hail, tornadoes and to a lesser extent for excessive precipitation.

A level 1 was issued for N Italy across the N Balkans into N Romania mainly for excessive precipitation and to a lesser extent for large hail and severe wind gusts.

A level 1 was issued for parts of the W Mediterranean, NE Algeria and N Tunisia as well as for the S Balkans mainly for large hail and severe wind gusts.

A complex high-index pattern is in place over Europe. The polar jet runs from Scotland across Germany to the Ukraine. Over the Eastern half of Europe, it gradually merges with an exceptionally strong subtropical jet that stretches from Northern Algeria towards the Balkans.
Near the surface, a long and wavy frontal zone stretches from Romania via the Southern Alpine region into Algeria. It further intensifies by the advance of the hot Saharan plume on its warm side. This zone is more or less stationary over the Eastern half of Europe, modulated by shallow cyclogeneses over Northern Italy and (probably) over Romania. Further West, approaching vorticity maxima over Central Europe and the Western Mediterranean region start to push the cooler air towards the Southeast.
An upper-level ridge brings stable and rather cool conditions into the British Isles and France.

... Italy across the Balkans into Romania and Bulgaria ...

A pronounced Saharan elevated mixed layer moves northeastward, sampled by many of the Tuesday 12z soundings (e.g. Brindisi, Pratica di Mare, Ajaccio, Decimomannu, Trapani, Tunis, Dar El Beida). Its Northern fringes overspread increasingly rich low-level moisture in the range of the frontal boundary. Over Italy and much of the Balkans, surface dewpoints can be expected to rise to around 20C on Wednesday. This results in moderate to high CAPE (1000-2000 J/kg, locally even more) under exceptionally strong 0-6 km shear (25 to 40 m/s) and 0-3 km storm-relative helicity (in large areas higher than 300 m²/s², with simulated maxima up to 600 m²/s²). Large-scale lift in the left exit region of the jet streak overspreads a belt from Northern Italy into the Northern Balkans, Hungary and Romania, while it is mostly absent further South.

A few storms may still be active (or already form) in the morning. More and more storms are forecast to initiate along old outflow boundaries or over orographic features in the course of the day. A quick organization into supercells with large or even extremely large hail and severe downbursts can be expected. Strongly enhanced 0-1 km shear and helicity over a large area, especially from Bosnia into Northern Bulgaria, indicates also a risk of several tornadoes, a few of which may be strong.
Later in the afternoon, storms will likely merge into a squall line that races eastward and poses a primary threat of widespread severe to extreme wind gusts, sustained by a forming Westerly low-level jet (20-25 m/s at 850 hPa). The bordering region of Bulgaria and Romania seems to be at the highest risk of being in the path of such a feature, and despite remaining uncertainties, the exceptional overlap of instability and shear warrant a level 3 for this region. Further convection, often in form of supercells with an ongoing severe weather risk, may continue to initiate all evening long, as outflow boundaries are expected to push Southward into Southern Serbia and Southern Bulgaria. In addition, prolonged periods of heavy precipitation pose a threat of flash floods with larger clusters that form.
Activity will slowly fade overnight as the storms either move onto the Black Sea or encounter a strenghtening cap beneath the elevated mixed layer towards the South.

Further North, storms may be active through much of the forecast period in the vicinity of the frontal zone over Northern Italy, the Northern Balkans and Northern and Central Romania. With an almost front-parallel motion, very high rainfall accumulations and resulting flooding seem to be the dominant risk. Areas of particular concern are the Western and Southern Carpathian mountains in Romania. Current thinking is that this activity will be partly embedded and may decouple from the surface in case it is undercut by too cool air. However, if more discrete storms manage to form and stay surface-based, large hail and severe wind gusts may occur as well.

In the second half of the forecast period, strong vorticity advection and the advancing cooler air from the West will weaken the cap. Some elevated thunderstorms are forecast to form. If they manage to root down to the sea surface, they can turn well-organized with a threat of severe wind gusts and large hail. Convection may move onshore in Corsica, Sardegna and Central Italy in the course of the night.
A somewhat higher storm coverage is expected in coastal regions of Southern France and Catalonia. However, relaxing instability and shear turns severe weather unlikely.

On the cool side of the frontal boundary, a strong short-wave trough (which closes into a small upper-level low) will cross Germany, the Czech Republic and Northern Austria. Patches of CAPE are forecast to develop in response to large-scale lift and diurnal heating. Especially towards the South (Bohemia and N Austria), convection can benefit from enhanced 0-3 km shear between 10 and 15 m/s. It may organize into low-topped multicells and a few supercells. Small hail and strong wind gusts are expected, but should mostly remain below our level 1 thresholds.

Scattered showers and weakly electrified thunderstorms will develop in the well-mixed and weakly sheared cool airmass. A few waterspouts are possible near the coastlines of the Southern Baltic Sea, especially between Denmark and Sweden. Small hail is locally possible as well.