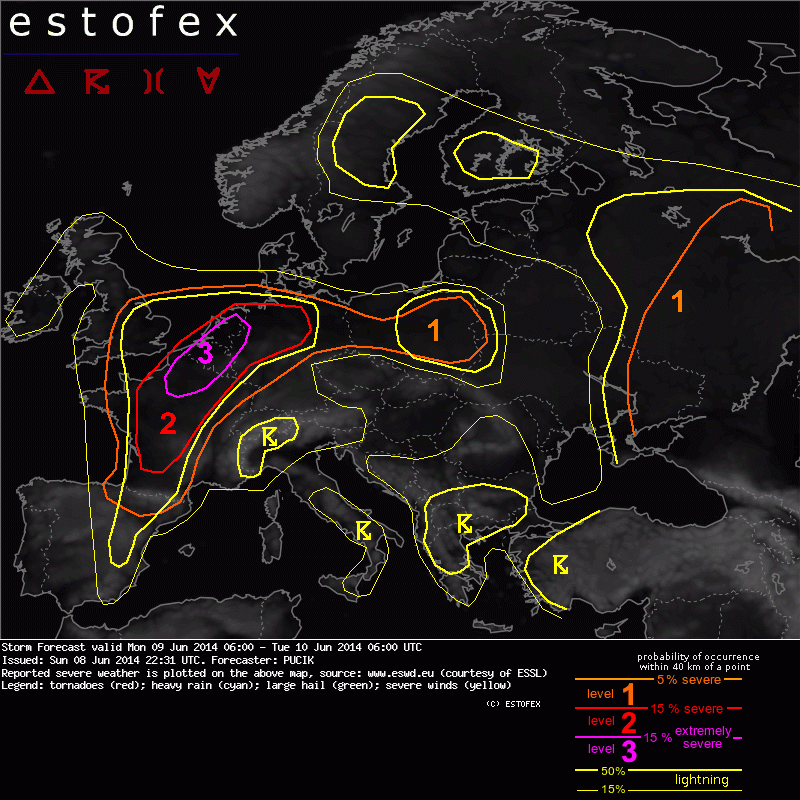 A level 3 was issued for NW France and BENELUX for very large hail, damaging wind gusts, tornadoes and excessive precipitation.

A level 2 was issued for much of France and NW Germany mainly for very large hail and damaging wind gusts.

A level 1 was issued for England mainly for severe wind gusts and large hail.

A level 1 was issued for E Germany and Poland mainly for large hail and severe wind gusts.

A level 1 was issued for parts of Russia and Ukraine mainly for large hail and severe wind gusts.

In between of the deep low over the Atlantic and the ridge over Central Europe, strong southerly to southwesterly flow will advect hot airmass characterised by steep mid-level lapse rates from N Africa towards France, Germany and then around the ridge towards Poland. Potentially dangerous situation will evolve over France, BENELUX and NW Germany just ahead of the diffuse, wavy frontal boundary that will remain quasistationary close to French coastline during the most of the day. Another low will slowly dig SE-wards across NW Russia. Moderate to strong NW-ly flow is simulated at its southwestern flank. With prevailing low geopotentials over much of Eastern Europe, so scattered DMC is expected also there, albeit severe threat will be smaller than in case of France / BENELUX.

... France towards BENELUX and NW Germany ...

Very dangerous setup will develop over the region by the late afternoon hours. With pronounced overlap of low-level moisture and steep mid-tropospheric lapse rates, models agree on the development of high to extreme CAPE values, with Central France towards BENELUX and NW Germany having the highest odds of seeing 3000 J/kg of MLCAPE by the late evening. As 500 hPa winds between 15 to 25 m/s overlap with backed low-level flow thanks to the presence of the surface trough, strong DLS (20-25 m/s) is forecast. By the late evening, with the enhancement of the low-level wind field with deepening trough, SREH values will increase especially over NW France / BENELUX (with values over 300 m2/s2 possible). Such setup will be very conducive for intense supercells / bow-echoes, capable of very large hail and damaging wind gusts. Towards the evening (beyond 18 UTC), as LLS strengthens, tornadoes will become a threat as well, especially if isolated supercells manage to persist into this time frame.

However, models do not simulate any pronounced QG forcing to rapidly reduce CIN. This will, on one hand, allow for CAPE to build-up steadily towards the late afternoon. On the other hand, it is highly questionable how many storms will initiate and where exactly. There is considerable disagreement by individual models. Overnight / morning convection, along with the outflow boundaries laid by these may be crucial in this setup. Current thinking is, that the foci for late afternoon initiation will be NW France, along the surface convergence zone, with storms spreading into BENELUX. It is likely that these storms will be isolated supercells at first, with subsequent clustering resulting in a fast forward propagating bow-echo. Towards the night, Southern to Central France may see convective initiation, with another possiblity of MCS travelling north towards N France.

Level 3 was introduced for the region, where the highest probability of high storm coverage is forecast and where high density of extremely severe events is most likely. With that in mind, any spot in the Level 2 may see extremely severe storms in these highly favourable conditions, provided storms can initiate.

Models show that somewhat warmer, moist airmass should advect over E England as the wave in the frontal boundary propagates towards northwest. However, edge of the EML plume should remain to the east, so that MLCAPE values will stay on the order of hundreds of J/kg. As strong flow ovespreads the region, over 25 m/s of DLS is forecast. All models agree on initiation along the lifting warm wave of the boundary. There will be a potential for isolated supercell development, which would be capable of large hail and severe wind gusts. However, lack of steep mid-level lapse rates may limit the hail threat, so that a high-end Lvl 1 instead of Lvl 2 is issued.

As EML is advected around the ridge towards east, overlap with modest low-level moisture will contribute to the development of moderate instability, with MLCAPE values above 1000 J/kg. Vertical wind shear should be moderate, between 10 to 15 m/s of bulk shear in the 0-6 km layer, increasing NEwards to between 14 and 20 m/s. Some strong multicells (or perhaps even brief supercells) may initiate along the ill-defined warm front with attendant threats of large hail and severe wind gusts.

With the progressing cut-off low, a plume of steep lapse rates will be pushed southeastwards, but still, the extreme eastern part of the forecast area may see some stronger multicells capable of large hail and/or severe wind gusts. Wind shear should be weak to moderate, perhaps limiting the supercell threat (and very large hail risk).