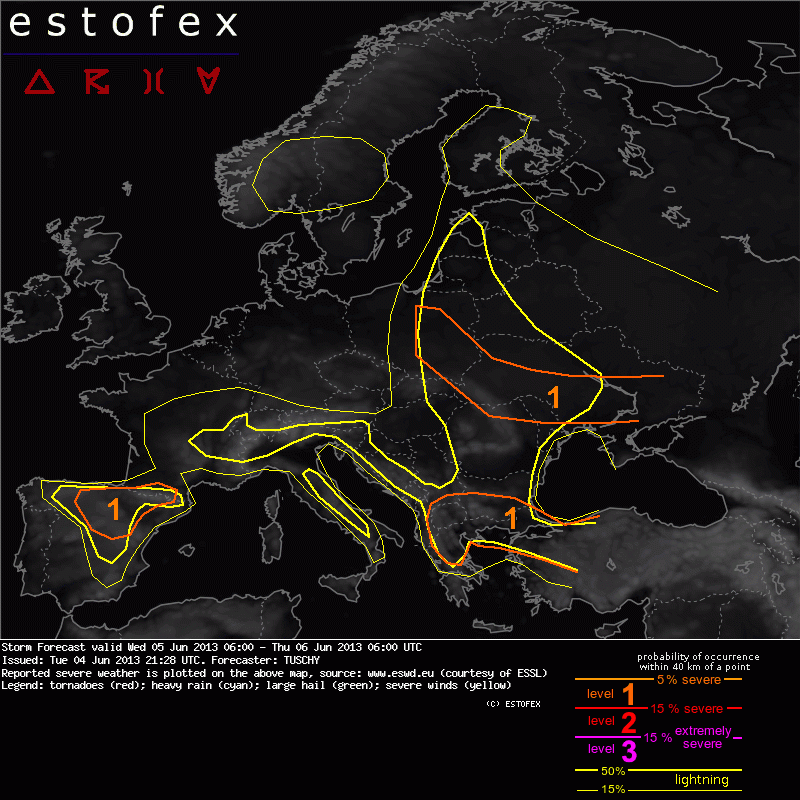 A level 1 was issued for N-Spain and extreme SW France mainly for large hail and a few severe downburst events.

A level 1 was issued for N/NE Greece, parts of S Bulgaria, Macedonia and NW Turkey mainly for isolated large hail.

A level 1 was issued for N-Romania, W/N Moldova and parts of the Ukraine initially for large hail but betimes also for excessive rainfall amounts. The level 1 was expanded well into C-Poland mainly for an heavy rainfall risk.

The spacious upper low, centered over SE Europe, continues its weakening trend although a distinct circulation is still present. This feature remains more or less stationary during most of the forecast although a slight eastward shift might occur during the overnight hours as a stronger impulse in the subtropical jet passes by. Weak height rises occur over W-Europe which results in further weakening of the extensive W-E aligned mid/upper trough. The intense cold-core low over Norway/Sweden creeps a bit to the W/NW and covers all of C/S Norway.

Along the surface, the main feature of interest will be a wavy frontal boundary which extends from the Baltic Sea towards Poland. A cold front over W-Russia moves south but has no impact on the forecast.

The set-up remains favorable for active daytime driven thunderstorm development over an extensive area. A subdivision was performed to highlight certain areas with distinct meteorological parameters:

Surface dewpoints in the mid-tens over NE/N Spain and upper single digits in the mountains offer a rich BL moisture content with mean mixing ratios of 7-9 g/kg within the highlighted area. The past few days showed some diurnal mixing due to strong heating, but overall depth of moist air (1 to 2 km AGL) remained more or less unchanged. In response to an approaching E-Atlantic trough, winds at mid-levels start to back (sampled by Lisboa), and a transient WAA regime is forecast (already visualized by NE-ward spreading cirrus over the Iberian Peninsula). This assists in a N-ward fanning EML plume, which overspreads the area of interest. Forecast soundings show steepening mid-level lapse rates with modest moisture content beneath a 800 hPa cap, so 500-1000 J/kg MLCAPE looks reasonable. Highest CAPE values probably evolve along the Pyrenees, where some upslope flow from the south occurs. DLS remains weak (10 m/s or less), but WAA regime inserts some veering. Combined with healthy looking CAPE profiles, a few strong multicell storms with large hail and strong wind gusts are forecast. Storms remain attached to the mountains for some time, before moving off the mountains (cold pool driven) during the late afternoon/evening hours. Thunderstorms continue into the night, although weakening betimes. Most storms should be sub-severe by then. We added far SW-France into the level 1 due to the hail risk.

Further north into France, mid-level lapse rates remain modest, but less BL moisture should keep MLCAPE around 500 J/kg. Scattered thunderstorms are certainly possible during the afternoon/evening hours (driven by orography), but nothing severe is anticipated.

Focus for widespread CI remains the N-S aligned frontal boundary, which starts a westward motion as a warm front. The postfrontal air mass is characterized by very moist air (from the BL well into the mid-tropospheric region). This compensates somewhat weaker mid-level lapse rates and 500-900 J/kg MLCAPE is forecast. Shear is weak, so rapid upscale growth of thunderstorms into numerous clusters is forecast. Main concern will be excessive rainfall amounts due to slow storm motions and high PW values. Mid-level lapse rates increase to the east, so NE-Belarus and extreme W-Russia may see a few large hail events, too. Thunderstorm coverage gradually decreases during the overnight hours but expect at least isolated activity all night long.
No level 1 was issued due to numerous missing foci for a more organized heavy rainfall event and also due to uncertainties in CI over W-Russia.

From Italy towards the Balkan States, scattered thunderstorms are forecast during the afternoon and evening hours, but meager lapse rates, modest CAPE and weak shear preclude any organized convection. Isolated large hail/strong wind gusts and heavy rain are certainly possible with strongest storms.

For W-Finland, models advertise healty looking CAPE profiles with 700-1000 J/kg MLCAPE, but only sporadic CI is expected. An isolated strong to temporarily severe storm is possible with large hail and strong wind gusts. No level will be issued due to low-end storm coverage.

Once again, 100-200 J/kg 0-3 km CAPE and locally enhanced LL vorticity points to a continued risk for a few non-supercell tornado events for all highlighted areas in Europe. Enhanced LL shear on the mesoscale (e.g. due to storm interaction, outflow boundaries or the topography) may also result in a locally enhanced tornado risk. However, this risk can be evaluated mainly during the nowcast (e.g. monitoring convergence zones and the BL moisture distribution) and therefor no level 1 was issued for that risk.