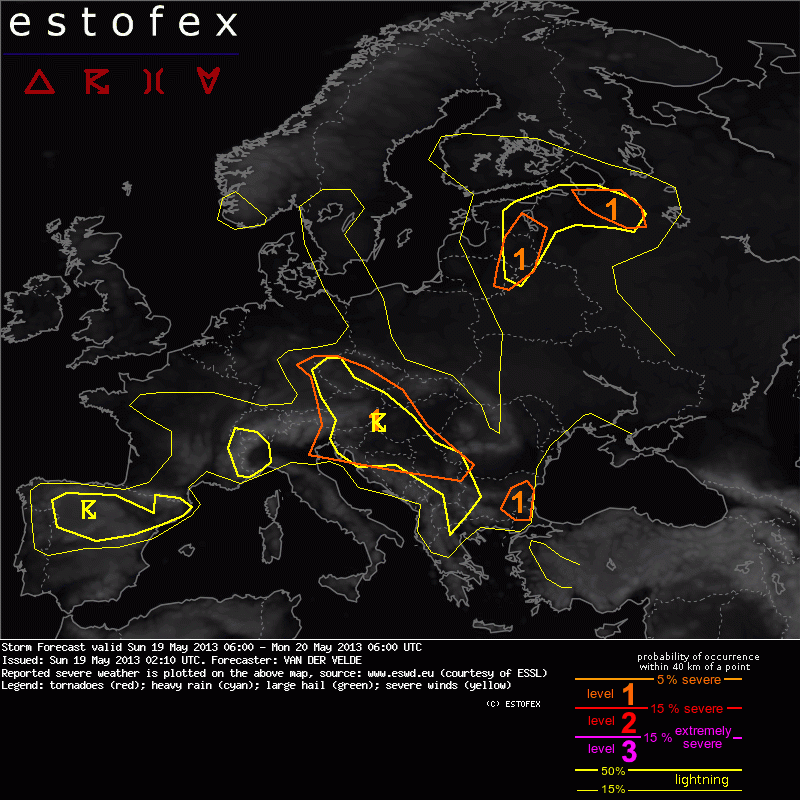 A level 1 was issued for the eastern Baltic countries and a part of Russia mainly for large hail and severe convective wind gusts.

An interesting weather pattern today over Europe. A cold-air filled low at 500 hPa is centered over France and extends from Portugal to Austria. It will warm up and deform into a WSW-ESEelongated shape. Strong lifting from differential vorticity advection takes place at the east side of the system, where a negatively tilted PV lobe digs into the region of Austria and surroundings. It is collocated with an almost stationary cold front and strong convergence zone and low pressure center, particularly over southeastern Germany, Czechia, northern Austria. East of this cold front models predict unanimously decent CAPE values, but the instability has yet to show up as moisture is advected from the south. Other lows are found over southern Scandinavia, northeastern Spain, northwestern Italy, and the Baltics. The latter draws in the most unstable air on the map, locally over 2000 J/kg MLCAPE.

East of the mentioned cold front sufficient CAPE should build, helped by moisture advection and the mid level cooling from adiabatic lifting. The front is is very well delineated by a temperature drop and strong convergence and deformation. Ahead of the front, no more than 15 m/s of 0-6 km shear is predicted. At and behind the front, north of the Alps, 200-400 m²/s² of 0-3 km SREH is forecast. If a storm grows in such environment it can easily acquire a rotating structure favorable for large hail growth and severe wind gusts. It appears the LCL height is not going to be very low before the front. Over Austria, föhn effect seems to produce high LCL (2000 m) even in the rough GFS model. Therefore it seems the tornado risk, unless some supercell could hover over the surface front, is low. While forcing, instability and shear all seem favorable, a concern is that the orientation of shear and storm motion is almost parallel to the front. In practice this often turns into a linear system or a messy, destructive environment to convection. To the southeast this is not much different, but LCL heights should be over 2000 m there and more moisture pulled in from the south. Shear is around 15 m/s all the way to Bulgaria and favorable for organisation of storms, likely into a linear system over Hungary.

Two areas with more than 10 m/s of 0-6 km shear have been highlighted and offer convergence zones indicated in GFS. Nowcasting should reveal more precisely these zones (old outflow boundaries), as the region continues to be affected by storms this night. There is rather high MLCAPE already in place. 00Z Velikie Luki sounding shows very steep lapse rates and low level moisture. While shear is just marginal, strong updrafts and downdrafts caused by the steep lapse rates should locally produce large hail and severe wind gusts. Dynamically the region is not active except low level warm air advection, actually north and east of these level 1 areas. The ongoing storms may have spoiled the environment for new storms to some extent.