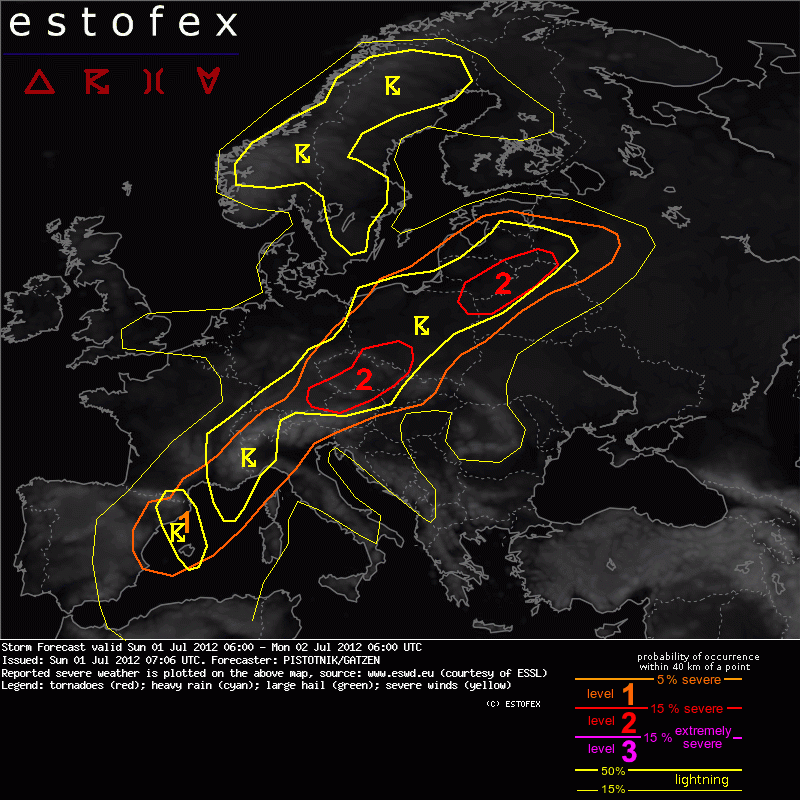 A level 2 was issued for extreme NE-ern Poland, eastern Lithuania and Latvia and western Belarus, and a level 1 for adjacent Belarus, Russia, Kaliningrad and Estonia for severe wind gusts, large hail and tornadoes.

A level 2 was issued for SE-ernmost Germany, N-ern Austria, the Czech Republic and SW-ern Poland, and a level 1 for the rest of Poland for severe wind gusts, large to very large hail, and to a lesser extent for excessive precipitation.

Large parts of Europe are covered by a strong Southwesterly flow between a long-wave ridge over East-Central Europe and a long-wave trough over Western Europe. At the tip of the trough, a separate upper-level low struggles to cut off over Spain at the beginning of the forecast period and leisurely travels northeastward into Southern France afterwards. The remaining northern part of the trough accelarates northeastward over France and Germany during the forecast period. Further downstream, the Baltic states are affected by another short-wave trough.
Latest satellite imagery indicates a mesoscale convective vortex across northern Poland that moves north-eastward. It will affect the Baltic States later on. The outflow boundaray of this system stretches from central Poland to eastern Czech Republic into southern Austria.
The main frontal boundary stretches from the Baltic Sea via Poland, Germany and the Western Alps into Eastern Spain and slowly moves eastward. It separates a very hot air mass to the East from temperate maritime air to the West, and will again be the focus for severe convection on Sunday.

... N-ern Poland into the Baltic States, Belarus and Russia ...

The ongoing MCV originating from Germany will still affect Northernmost Poland at the beginning of the forecast period, but has become elevated and weakens.
Ahead of this feature, in the meantime an increasing Southerly low-level jet will advect rich low-level moisture into the southern Baltic States, whereas steep lapse rates overspread the region with the strong South-westerly mid-level flow. Consequently, the model pool agrees on the rapid build-up of CAPE on the order of 1000 to 2000 J/kg ahead of a deepening mesoscale low which is expected over northern Poland in the afternoon. Warm air advection and the arrival of the short-wave trough from the West provide strong synoptic-scale support for rising motions.

Increasing convective activity is forecast from NE-ern Poland into eastern Latvia and possibly Estonia until the noon hours along the outflow boundary from the West. DLS between 15 and 20 m/s is more than sufficient for storm organization into multi- or supercells. This will lead to a propagation of the mesoscale convective system into Belarus and western Russia. Severe wind gusts, large hail and (to a lesser extent) excessive precipitation are possible with this activity.

In the strong warm air advection ahead of the low, 0-3 km SRH will likely be boosted to 200-400 m^2/s^2 and 0-1 km shear to 10-15 m/s. More discrete storms in the Southeastern quadrant of the low will therefore have enhanced chances to turn into tornadic supercells. The magnitude of CAPE, shear and helicity in the overlapping area point even to the possibility of a strong tornado!
Towards evening and into the night, the MCS will graze Belarus and Western Russia with a primary threat of severe wind gusts, before it slowly weakens.

Rich low-level moisture with dewpoints in the upper tens and even lower twenties are present at 06 UTC, while another "Alpine plume" with steep lapse rates will be advected over the Czech Republic and Slovakia into Poland at mid-levels. Moderate to strong instability with CAPE between 1000 and 2000 J/kg can hence be expected to build up, overlapped by moderate DLS of 15-20 m/s.

Main uncertainty is the behavior of the low-level wind field and the coupled evolution of boundary layer moisture depth. Overnight's thunderstorm activity over Germany has spilled an outflow with northerly winds into Austria and surrent thunderstorms across the Czech Republic. Current thinking is that this wind regime will subside again until noon and turn into a messy set of meso- and small-scale circulations over the Czech Republic, and into more pronounced Northerly to Northeasterly upvalley circulations with according "moisture piling" along the Northern Alpine rim.

Convective activity is forecast to weaken across the Czech Republic in the following hours. Due to moderate to strong capping and the absence of synoptic-scale forcing, convective initiation will again happen rather late. First isolated storms can be expected in the afternoon hours, igniting over orographic features and with a good chance to turn into multi- and supercells with a threat of large or even very large hail and local downbursts. Storm coverage should significantly increase towards evening, as the existing gust fronts / outflow boundaries will continue to trigger secondary convection. The forecast models largely agree on the formation of another MCS over SE-ernmost Germany, moving into the Czech Republic in the evening and across Central and Eastern Poland overnight. Severe wind gusts will be the main threat, but large hail and excessive precipitation are possible as well. A level 2 was drawn in order to account for a possible outbreak of severe weather with this feature.

Eastward channeling of the outflows along the Northern Alpine rim and the accordingly strong low-level convergence will probably be sufficient to initiate further storms over Northern Austria, where also a bow echo with widespread severe wind gusts may evolve in the evening hours and propagate eastward towards the warmer and moister air masses. The breaking of the cap and convective initiation or sustenance becomes somewhat questionable the further South and East it gets, but the threat seems to be robust enough to extend a level 1 into Slovakia.

Along the Northern edge of the area, i.e. over Eastern Germany and Western Poland, DLS increases to even 20-25 m/s, while CAPE decreases. Exact position of the frontal boundary is unclear and initiation becomes much less likely on its cool side, but a level 1 area includes these regions in case more instability will build up again and enable scattered multi- or supercell storms with a threat of large hail or severe wind gusts.

Scattered storms will probably go on or form in the morning hours in the range of the frontal boundary over Eastern Spain and Southern France. Towards afternoon, the center of activity will shift into the Western Mediterranean and the Western Alps. Large-scale lifting support ahead of the upper-level low will help in scattered initiation, and moderate CAPE and strong DLS (20-25 m/s, or even higher over E-ern Spain where it is enhanced by a lee cyclogenesis in the wake of the Pyrenees) are sufficient for storm organization into multi- or supercells. A level 1 was drawn to reflect a threat of large hail and severe wind gusts, limited by the questionable coverage of storms.
Activity should weaken in the evening hours except for NW-ern Italy, where the arrival of a vorticity lobe may extend it well into the night hours.

Rich boundary-layer moisture with dewpoints above 20°C is present along the shore lines, but the strong cap and the lack of synoptic-scale forcing will largely suppress thunderstorm activity. However, wherever patches of this rich boundary-layer moisture can be fed into upslope circulations, isolated strong pulse storms may form over the Apennin and Dinaric mountains, which pose a threat for large hail and localized downbursts. The low coverage and the lack of obvious "hot spots" precludes the issuance of higher thunder probabilities or a level 1.