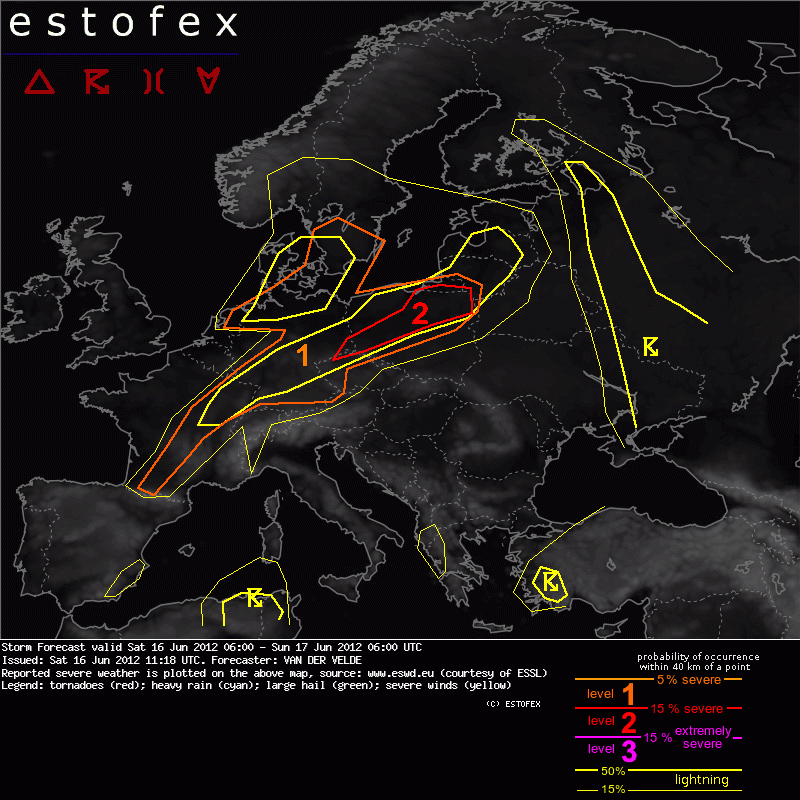 A depression over the British Isles has positioned an almost stationary frontal zone from northern Spain, central France and Germany, to northern Poland. An occlusion front bends back over southern Scandinavia to the center of the low. The warm airmass just south of the front has a couple hundred J/kg of MLCAPE in a zone which is narrow in France and western Germany, but broader to the east. The entire frontal CAPE area is strongly sheared with 0-6 km difference vectors of 20-30 m/s.

The Netherlands, northern Germany, Denmark and southern Sweden are in the cool, slightly unstable airmass right under the 60 m/s jet at 300 hPa. A distinct PV wave will run through this region, providing the necessary lift for convection.

A stationary zone of unstable air is also found over Russia and Ukraine in a north-south trough axis extending to an upper cold pool over eastern Ukraine.

On the warm side of the front, a few hundred to 1000 J/kg MLCAPE is expected by GFS and Hirlam models, however the zone is very narrow over France and SW Germany and broader around western Poland where a branch of regional moisture inflow joins from the south. Consistent is also the strong deep layer shear of 20-30 m/s, and additionally, 0-3 km SREH values over 150 m2/s2 with values surpassing 250 m2/s2 in central Germany and Poland. This is sufficient for supercells capable of producing large hail, primarily. LCL heights in the warm zone along the front are pretty high, which reduces tornado chances even though 0-1 km shear is reasonably high, over 10 m/s.
The SREH suggests veering winds with height, however, currently 10Z SFC observations rather show westerly winds instead of backing, even diverging from the front and slightly converging farther south in Germany, where moisture is weaker. This, as well as lack of dynamic lifting or even subsidence over the front decreases confidence in the severe weather potential of the situation.

Models do develop a SFC low pressure circulation and wave in the theta-e together with enhanced surface and 0-2 km convergence in the afternoon shifting from central Germany into Poland, despite QG subsidence signals, in a broader region of CAPE fed by a southerly branch of moisture inflow, which also causes more veering wind profiles with height and more solid helicity. The winds currently are already from south to southeasterly directions. The confidence is therefore somewhat higher that sufficient convective developments take place in the form of supercells with large hail and possible development of a squall line with wind gusts, most of which may however not be severe by lack of low level flow and the parallel orientation of the front to the shear vectors (although it is slightly better here than in the west). LCL height of 2000m does favor gusts and hail over precipitation. Although the primary threat should be enhanced large hail and isolated very large hail occurrence as well as isolated severe wind gusts, the parallel orientation over eastern Germany and western Poland may rather support increased precipitation threat later on, but the environment seems not moist enough. But effectively this can allow cold pools which can orient linear segments under a more favorable perpendicular angle with the shear vector. Over northeastern Poland the shear vectors turn more under an angle to the front with better chances of propagating linear convection producing severe wind gusts.
Downside for hail is the reduced upper level buoyancy by earlier subsidence, although supercells will probably not be bothered by it.
With doubts mainly about sufficient dynamic forcing, a marginal level 2 is nevertheless issued.

The cool side of the front is no less interesting. Though thermodynamically weaker, this is the region where dynamic lifting is most favorable. From 18Z through 00Z a trough passes with significant QG lift. It is associated with a marked low/mid-level lapse rate maximum and slight CAPE: During the afternoon, lifting is weaker and mostly over the eastern part of the area under the left exit of the jet streak. Most shear is deep layer, but LCL heights are low so there are some chances tornadogenesis could locally occur with somewhat marginal 0-1 km shear values of 7-10 m/s. Isolated marginally large hail might also occur.

1000 J/kg MLCAPE air over Turkey appears quite capped and does not appear to overlap with SREH, which is offset to the west of Turkey. However, high cloud bases and large delta-theta-e can lead to severe convective wind gusts from evaporational cooling.