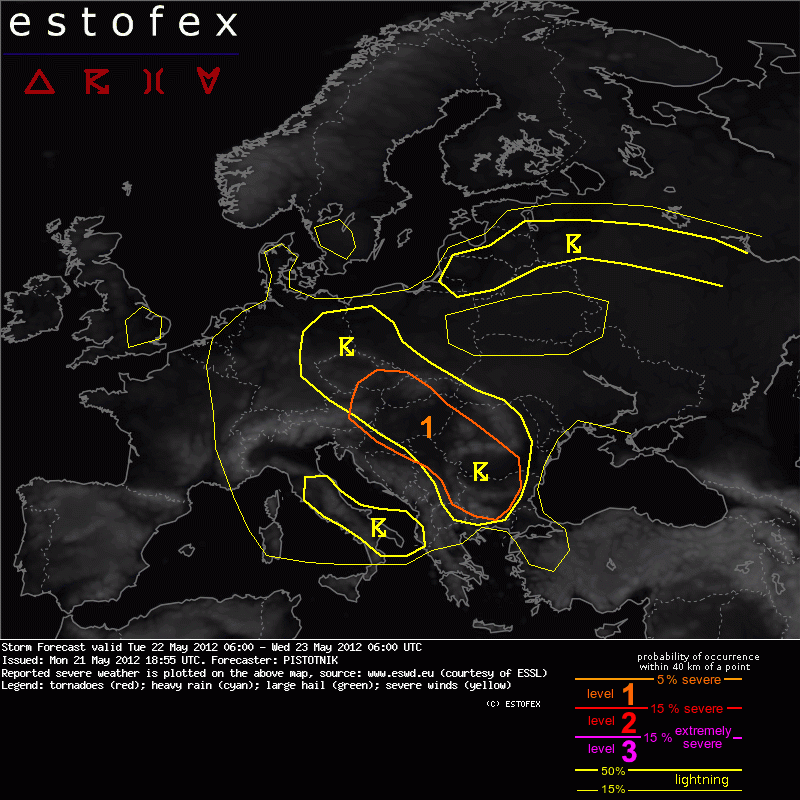 A level 1 was issued for Bulgaria, parts of Romania, Serbia, Hungary, Slovakia, and parts of Austria and the Czech Republic mainly for excessive precipitation and to a lesser extent for large hail.

A springtime pattern with a highly disturbed flow has established over Europe. Most of the continent is influenced by a large upper-level low with its core over Central Italy. Near the surface, various (mesoscale) low pressure centers form over Central Europe, Italy and the Balkan peninsula in response to dynamical forcing and/or thermal heating. A cold front and an attendant upper-level short wave trough pushing northeastward over the Balkan states provide a possible focus for severe weather. Behind this cold front, an unseasonably cool air mass spreads into most of the Mediterranean region, whereas very warm and partly humid air moves westward and wraps around the low pressure system over Eastern and Central Europe.
Scandinavia, the British Isles and the Iberian Peninsula experience dry, rather cool and mostly stable conditions beneath a bridge of high pressure.

... Level 1 area: from Bulgaria to the E-ern Alpine region and the Czech Republic...

An ill-defined cold front moves northeastward across these regions. CAPE is initially limited to a few hundred J/kg in the prefrontal air mass, but convergent low-level winds and synoptic-scale rising motions are thought sufficient to aid in convective initiation. Isolated to scattered thunderstorms may already be ongoing or form quite early close to the southwestern border of the level 1 area, in particular over Serbia and Western Hungary. Storm motion vectors almost parallel to the cold front from Southeast to Northwest and PPW amounts over 30 mm point at an enhanced risk of excessive rainfall, which may stretch all the way to the Eastern Alpine region and the Czech Republic where upslope flow establishes. Besides, an isolated spout-type tornado event is not ruled out along the wind shift line of the cold front, where capping is weak and low-level instability augmented.
As the day proceeds and the cold front moves further east, it encounters higher CAPE between 500 and 1000 J/kg over Bulgaria, Romania, Eastern Hungary and Slovakia. Consequently, also the risk of large hail grows. The best conditions for widespread storm formation seem to arise in the early to mid afternoon over Bulgaria and Southern Romania, where the diurnal timing is best and an accompanying short-wave trough facilitates convective initiation. However, vertical wind shear is as weak as in the rest of the level 1 area and probably precludes higher storm organization, so no level 2 was issued despite the expected high coverage of thunderstorms. They may last well into the evening before weakening overnight.
Further south towards Greece and Turkey, vertical wind shear increases beneath the subtropical jet, but convective initiation is very doubtful due to strong capping and a lack of dynamic support.

A complex situation evolves in the sphere of the upper level low, where diurnal heating beneath cold mid and upper levels may results in low to moderate CAPE up to 500 J/kg.
Vertical wind shear is very weak beneath the center of the upper level low over Central Italy, where confidence in storm formation is highest. Slow movement of the thunderstorms may result in locally high precipitation amounts. Besides, one or two landspout events are not ruled out, in particular along sea breeze fronts and other mesoscale boundaries.
Various jet streaks (~20 m/s at 500 hPa) curve the upper-level low around its northern, western and southern periphery and provide a better kinematic background for organized convection, but the overlap with areas of instability seems to be marginal. Current thinking is that the probability for convective initiation will be limited for various reasons, namely due to residual clouds and cold air advection behind the clearing front in Bosnia, Croatia, Slovenia and Northern Italy, and due to cool sea surface temperatures and a lack of dynamic support for initiation over Corsica, Sardegna and the Tyrrhenian Sea.
A feature of interest is another weak short-wave trough travelling eastward across Southern Italy and the Southern Adriatic Sea in the second half of the day. It may raise the storm coverage in these areas, and moderate wind shear (DLS ~15 m/s) increases the risk of large hail and strong precipitation, the latter especially with persistent upslope flow along the Italian West coast.
All these threats seem to be too conditional for a level 1 at the moment, but these areas may need a close monitoring during the day in case instability and shear show a better overlap than anticipated.

Diurnal heating will probably create CAPE between 500 and 1000 J/kg in a weakly sheared and otherwise quiescent environment. Isolated to scattered thunderstorms are expected to form in the afternoon and evening hours. Main trigger mechanism for the storms will be orographic features and possibly an advancing sea breeze front over Poland and Germany, whereas they are tied to an inactive frontal boundary further east over Lithuania, Latvia and Russia. Severe weather is unlikely, though large hail is not ruled out locally.