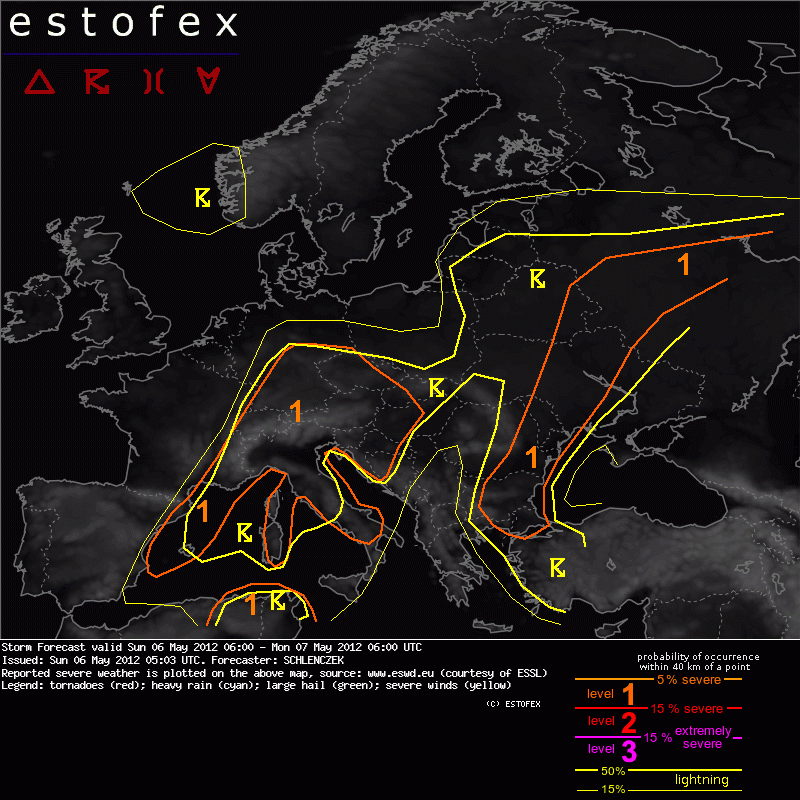 A level 1 was issued for SW and central Germany, E Austria and W Hungary mainly for large hail and severe wind gusts.

A level 1 was issued for a broad region from the Bosporus towards N-central Ukraine and W Russia mainly for large hail and severe wind gusts.

The recent upper air maps show two baroclinic zones over Europe: one is found in the vicinity of a strong low pressure system over S Norway towards W Russia and the other is found along a line from S Spain towards the E Adriatic coast. In between both zones with a strong upper jet streak, a weakening upper is present over Germany.

Instability is expected along the southern cold front and also over eastern Europe in a zone of rather weak pressure gradients. A good overlapping of 20 - 25 m/s of deep layer shear and some instability is present over the W Mediterranean, the Alpine region, parts of Italy and the N Adriatic, and also central Germany and W Czech Rep.

Near the southern tip of the large upper trough, strong 0-6 km shear overlaps with 400 - 800 J/kg MLCAPE. This will lead to organized multicellular systems which may pose a threat of large hail and severe wind gusts. Especially over Italy and along the Adriatic coast, high effective PWAT may lead to excessive convective rainfall and flooding. Most of the maritime regions are excluded from the LVL1 because excessive precipitation does not do any damage there and large hail is much less likely in a maritime boundary layer.

During the afternoon hours, instability is forecast to increase in this region from about 200 J/kg towards 500 - 800 J/kg MLCAPE. Combined with some 20 - 25 m/s of 0-6 km deep layer shear, organized multicellular systems are likely to evolve. Under such conditions, an isolated supercell cannot be discounted either. The main threat is supposed to be large hail and severe wind gusts, but high effective PWAT and a strong LL moisture convergence may also allow local excessive convective precipitation and flooding, especially towards the east. Tornadoes are unlikely in this environment with only weak LL shear and almost no SRH1/ SRH3.

Some hundred J/kg of CAPE, 25 - 30 m/s of deep layer shear and locally enhanced SRH3 is in place, which leads to an enhanced possibility of supercell storms with large hail and severe wind gusts as main threat. The storm evolution is diurnally driven and has its peak activity in the afternoon.

Some 800 - 1500 J/kg of MLCAPE are likely available during the day and scattered thunderstorms are expected to form. Overall shear is rather weak but locally augmented instability may allow some isolated large hail/ severe wind gust events.