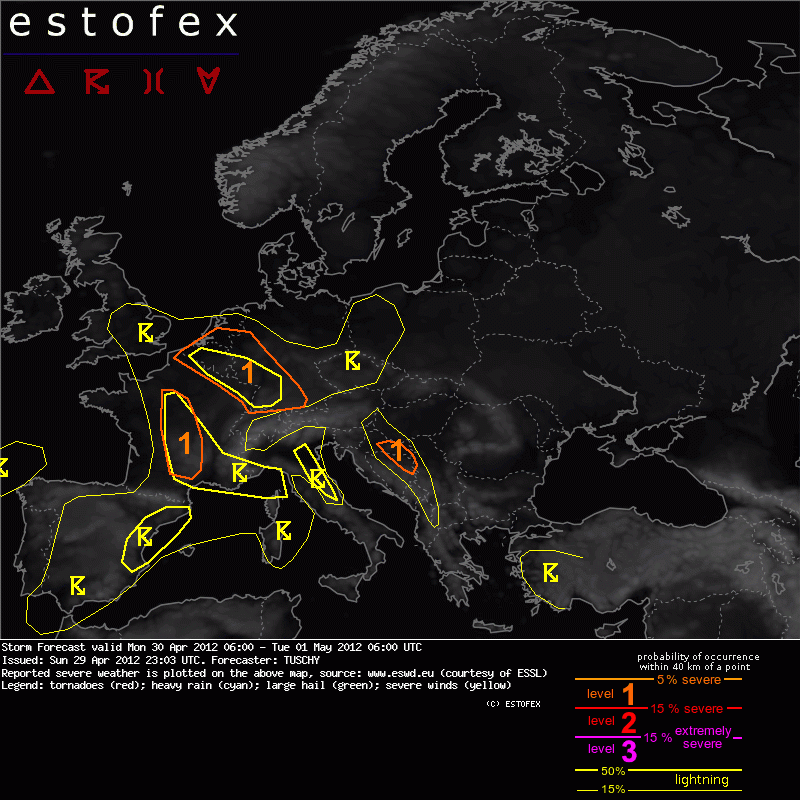 A level 1 was issued for NE-Croatia and N-Bosnia and Herzegovina mainly for isolated large hail.

A level 1 was issued for far SW/W-Germany, far NE France, Belgium, Luxembourg and parts of the Netherlands mainly for large hail and strong to severe wind gusts. An isolated tornado event is possible mainly during the evening hours.

A level 1 was issued for parts of CNTRL France mainly for large hail and strong to severe wind gusts. An isolated tornado event is possible.

Large-scale cut-off low is situated over W-Europe with high pressure to the east. Lowering 500 hPa height levels occur over most of CNTRL Europe with increasing probabilities for isolated DMC even beneath the western fringe of the ridge. Progressive wave train of upper troughs still affects far N-/NE Europe with unsettled and cool conditions.

20 Z synop data places a tongue of augmented LL moisture just south of the stalling warm front over N-Germany with readings in the lower to mid tens. This air mass advects to the SE in response to a weak thermal low, which drifts to NW Poland during the forecast. Best moisture will reside over Poland, the W-Czech Republic and probably also sneaks into far S-Germany. For the rest, marginal BL moisture with readings of 6-9 °C are expected during the forecast. However, outflow boundaries from convection of last night and other convergence zones on the mesoscale may serve as foci for better dewpoints. Impressive EML plume, which affected CNTRL Europe during the past 2 days, starts to fan out to the N/NW with diminishing intensity. Hence, final CAPE dispersal will be messy with most robust build-up along the moisture axis from Poland to S-Germany. 500 to 800 J/kg MLCAPE are possible with significantly lower values to the west. Again, better LL moisture/CAPE exists over Belgium.

Poland and the Czech Republic remain capped during the forecast, placed beneath weak ridging and devoid of any forcing mechanisms. Hence, isolated and pulsating storms along the rough topography are forecast. Aforementioned better CAPE may assist in strong to isolated severe cells with a few large hail events and strong wind gusts (e.g. enhanced DCAPE signals present). A 15-% general thunderstorm area and a level 1 overlap was issued for parts of S-Germany mainly for isolated but severe pulsating storms with large hail and strong wind gusts the dominant risk.

Shear from SW/W-Germany to Benelux and NE France becomes quite favorable for organized storms with strengthening gradient flow and strong directional shear (15-20 m/s DLS for 3 and 6 km layers and 200-300 m^2/s^2 SRH-3). A strong impulse over SW-France weakens and breaks up during its northward progress with model spread present in timing and strength. The pattern is supportive for broad diffluent high-level flow, so combination of upper divergence, crossing weak vort maxima and intensifying LL convergence within the highlighted area all favor scattered thunderstorm initiation. Focus for initiation will be the 50-% lightning area, where repeatedly initiation is possible. A few storms may struggle to gain organization due to limited LL moisture/thin CAPE profiles, but any developing storm along mesoscale boundaries and over Belgium/Luxembourg and far W-Germany may see adequate support for longer lifetimes and a few supercell events are well possible. The main hazard will be large hail and strong wind gusts. However, an isolated tornado event is possible during a confined time frame, where surface based/slightly elevated storms are forecast with lowering LCLs and rapidly strengthening LL speed and directional shear...mainly between 15-21 Z.

S-UK was not added to the level 1 due to ongoing concerns of limited CAPE, as clusters of showers/embedded thunderstorms may decrease insolation/diabatic heating. A few marginal hail events are possible. If stronger diabatic heating occurs, the risk of an isolated tornado increases during the evening hours as LL shear intensifies.

During the late evening hours onwards, strengthening 850 hPa winds, aligned nearly parallel to the moisture tongue point to a somewhat enhanced risk for back-building and clustering storms mainly over Belgium and Luxembourg. Heavy rainfall will be the main hazard with storms becoming more elevated betimes.

Scattered thunderstorms evolve during the day ahead of a northward moving vorticity maximum. Moisture return is marginal at best but still adequate for roughly 500 J/kg MLCAPE build-up. 15-25 m/s DLS allow a few storms to become organized with large hail and strong wind gusts. However, confidence is low that storms remain discrete for a longer period of time with rapid clustering forecast. Hence a large cluster of showers and thunderstorms evolves, which may keep thunderstorm coverage more limited over E-CNTRL France due to sparse insolation (next to marginal moisture).

First area with strong activity is forecast along S-France where better CAPE evolves. We don't want to exclude heavy rain with that activity but there is not yet any sign for backbuilding/training activity with no distinct LLJ expected. The activity diminishes until midnight with isolated storms still possible from far W-Switzerland to SE-France after 00Z. Marginal hail accompanies those storms with some MUCAPE and 30 m/s DLS in place.

Another area will be the level 1 over parts of CNTRL France, where a NW-ward moving warm front assists in enhanced BL moisture and MCLAPE up to 800 J/kg. DLS of 20-25 m/s results in well organized multicells/isolated supercells with large hail and strong to severe wind gusts. LCLs below 500 m and locally enhanced LL shear along the warm front may also support a tornado or two. The activity gradually vanishes after sunset.

A strong impulse over NE-Spain lifts northwards during the day and leaves behind a set-up favorable for scattered thunderstorm activity. Modest BL moisture and 500 hPa temperature at or below -25 °C cause roughly 500 J/kg MLCAPE build-up. Shear is weak, so pulsating storms or weakly organized mutlicells are forecast. Marginal hail and strong wind gusts will be the primarily hazard. The onshore activity diminishes after sunset but continues well into the night offshore.

Mainly daytime driven storms along favored topography are forecast. An isolated large hail event is possible over NE Croatia and N-Bosnia and Herzegovina with strong MLCAPE signal in excess of 800 J/kg. A confined level 1 covers that risk. An isolated large hail event may also occur over N-Italy due to the proximity to the mid/high-level jet. However, no level 1 was added as storms tend to cluster fast, probably producing heavy rain.