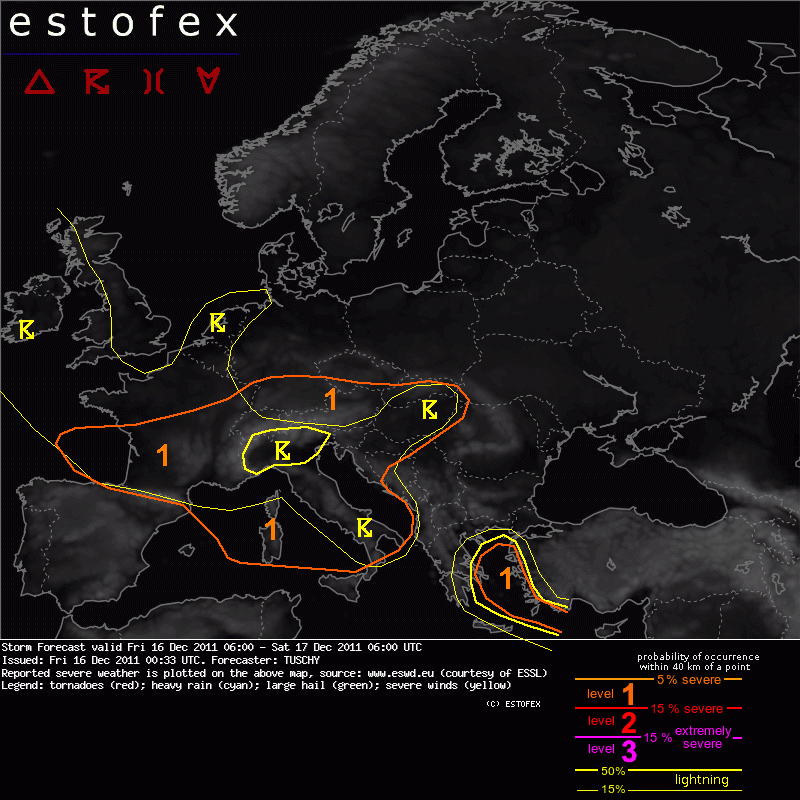 A level 1 was issued for most parts of W/S CNTRL Europe mainly for severe to damaging wind gusts and isolated tornadoes.

A level 1 was issued for N-Italy mainly for severe wind gusts, isolated large hail and an isolated tornado event.

A level 1 was issued for the Aegean Sea and W/S-Turkey mainly for large hail and waterspouts.

Latest satellite data at 15th Dec 2011, 23Z indicates an impressive warm conveyor belt (WCB)/baroclinic leaf over parts of S-Ireland/UK and France and still supports an early stage of that evolving low with only first signs of a westward wrapping cold conveyor belt. Nevertheless, the air mass composite now has some indications of descending high tropospheric/low stratospheric air atop the northern part of the WCB, now pointing towards the evolving depression. Also, daytime HVIS data had a nice pattern of transverse bands within that cirrus band, indicating the presence of an impressive polar front jet with up to 70 m/s at 300 hPa....forecast by models and well verified by latest CIMMS analysis. The wave is placed with a reading of 984 hPa just SW of the English Channel at 23Z. It races eastwards along a deep baroclinic zone over UK and Benelux with influx of subtropical air from the S/SW, which is very favorable for deep and strong cyclogenesis. A marginal negative point may be the still disorganized and westward displaced upper trough. However, models agree in further strengthening of this trough and as the LL depression starts its slow down during the rapid intensification phase, both features start to catch up and hence a constant onshore strengthening trend may be realized over Germany. It is interesting to see how models constantly come in with somewhat lower core pressure, as that feature now moves into an area with higher data coverage. Buoy 62029 now (22Z) has a pressure of 994 hPa and 62103 reports 981 hPa and gale force wind gusts (both placed just W of the English Channel).

With the approach of the upper trough, background dynamic support is more than adequate to support further strengthening of that depression onshore over Germany and probably all the way to Poland. As a result, a significant low pressure area crosses Benelux from W to E (morning hours), CNTRL/NE Germany (until sunset) and NW Poland during the night hours.
Global model data still indicates some modest warm seclusion development with that feature, but right now no real indications of an active back-bent occlusion event can be detected. Nevertheless, areas like E-Germany or W/NW Poland may need to be monitored for that possibility in upcoming data. In fact, GFS 18Z now comes in again with a very well defined occlusion and impressive LL wind fields.

Attendant cold front will race southbound during the forecast, crossing S-France during the afternoon/evening hours and approaching Sicily/S-Italy during the end of that forecast period ! An increasingly meridional flow will allow a blustery blast of cold air all the way to the W-Mediterranean.

Finally, a few negative points within this overall set-up are the aforementioned late arrival of the trough, a rapidly decaying prefrontal moisture tongue over CNTRL Europe as inflow from the E-Atlantic decays and finally no more robust dry slot event (regarding enhanced potential instability and split front character of the cold front). So still numerous negative points to work with for that outlook regarding a concentrated wintertime severe thunderstorm event.

We expect no DMC within the broad warm sector of that low, supported by forecast sounding data given deep WAA regime. This may keep the most extreme wind gusts off the surface.

The focus then shifts to the cold front, which is aligned in a more SW-NE manner over France and more from N-S over S-Germany and NE-Austria. Strong dynamics and rapid cooling of the mid-levels may assist in a forced line (probably LEWP-like) of convection along the cold front, which races SE-wards (S-France) and E-wards (S-Germany). However at least over S-Germany the structure of that cold front does not look so impressive right now as does the pressure tendency field in the model field. Nevertheless, not much mixing will be needed to bring damaging wind gusts down to the surface as winds at 850 hPa remain in the range of roughly 30 m/s. Any line-up of convection (even short-line segments) will be able to produce similar wind gusts at the surface! Also, some moisture pooling along that front is still forecast, which may assist in enough LL CAPE for an isolated tornado event. We excluded S-Germany and parts of Austria from a thunderstorm area, as BL moisture seems to be very sparse in forecast model fields. Hence, confidence in electrified convection is limited. However, this does not limit the risk of damaging surface wind gusts as described above.

Of some concern is also an area, covering Hungary and Slovakia during the evening hours onwards. As the cold front approaches from the west, it taps into better moisture, which becomes advected from the N-Adriatic Sea/NE Italy. Some discrepancies exist regarding timing and placement of that front/moisture tongue overlap, but this configuration may result in better prefrontal CAPE build-up. Hence the low prob. thunderstorm area was expanded well to the NE. With diffuse forcing and a messy wind field, coverage of thunderstorms remains questionable. Strong to severe wind gusts will be the primary hazard.

An upgrade was not performed due to ongoing uncertainties especially regarding prefrontal moisture quality and the strength and phasing of the mid-/ upper level dynamics.

The cold front approaches the Alps around noon. The lower part of that front will be blocked, whereas cold mid-levels continue to spread southwards, eventually overrunning the surface boundary over N-Italy. This may result in a flare up of DMC over N-Italy during the afternoon/evening hours. Any stronger updraft will rapidly gain organization with severe wind gusts, isolated large hail/tornadoes. Otherwise, an active cold front passage is expected over the CNTRL Mediterranean from NW to SE. Increasing BL moisture and strong forcing may keep up the risk of an elongated forced line of showers/thunderstorms all the way to Sicily and S-Italy. Thunderstorms over the W/S-CNTRL Mediterranean become very sporadic as the cold front outruns the coldest mid-levels. Severe wind gusts and an isolated tornado event will be the primary risk. An heavy rainfall risk may exist along the E-coast of the Adriatic Sea, as a lee-cyclogenesis evolves over N-Italy with strengthening onshore flow forecast. However, confidence in DMC or training is very low right now (more shifting to a stratiform upslope event).

Sporadic thunderstorm activity is forecast within a polar air mass. However, expected coverage is too marginal for a broad thunderstorm area. We decided to highlight the coastal areas of Benelux, where some BL convergence may assist in a few thunderstorm events with sleet.