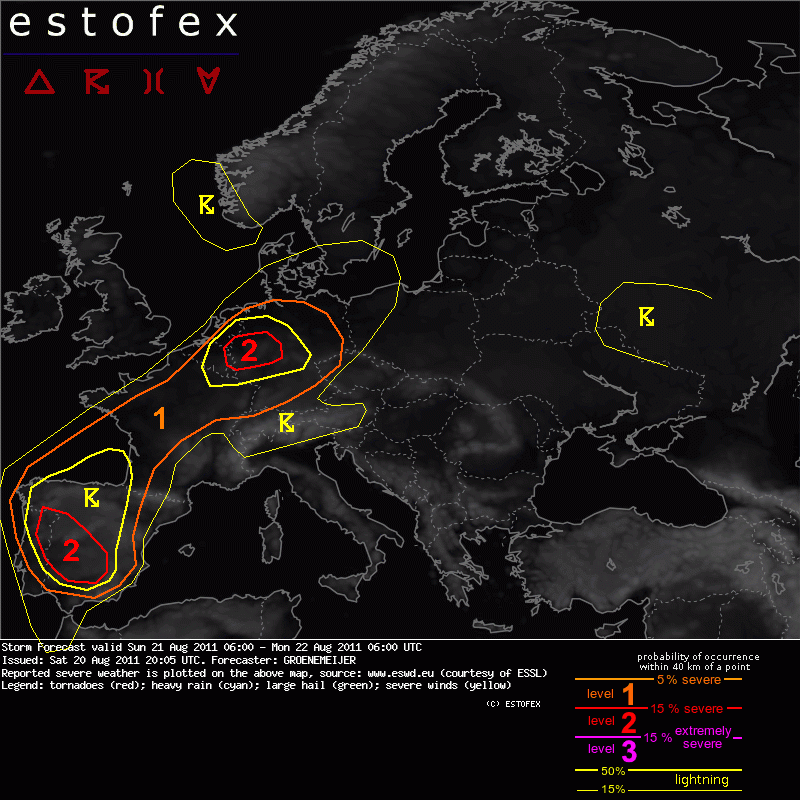 A level 2 was issued for parts of E Portugal and W Spain mainly for excessive rainfall, large hail and perhaps a tornado.

A level 2 was issued for extreme E Benelux countries and parts of Nrn and central Germany mainly for severe wind gusts and large hail, and perhaps a tornado.

On the eastern flank of a large-scale trough, featuring a cut-off low near its base off the western Iberian coast, very warm air is advected northward. A well-developed mixed layer is covers E Iberia and - as an elevated layer - southern and central France. The air-mass across France is particularly moist with 20-22 C dew points observed across central and southwestern France on Sunday.

Here, wind shear is expected to become strong with about 30 m/s expected by Sunday evening, suggesting that storms will easily acquire rotating updraughts. Such storms will are expected to produce large hail and locally severe winds. A small threat of tornadoes will exist as well.

It is possible, however, that a large fraction of storms will not be individual supercells, but be part of large clusters. Since these will probably be oriented along the flow, very high rainfall accumulations may locally occur, especially where such systems interact with orography.

The warm, moist air in France will move northward during the 00-12 time frame, effectively placing a diffuse frontal zone over the Benelux countries. A 30 m/s mid-level jet is collocated with this zone

Elevated convective activity is likely over the southern Benelux/northeastern France. As the air-mass recovers in its wake, 1000-2000 J/kg of MLCAPE should form. This instability combined with about 30 m/s of 0-6 km bulk shear should suffice to sustain rotating storms and bowing systems capable of producing severe wind gusts, given that they initiate.
A small threat of tornadoes will exist as well.

Now an elongated weak PV anomaly is expected to approach the Benelux countries after noon, which will probably induce convective initiation. The coverage of storms is however quite uncertain. I have therefore decided to draw a small level 2 area where coverage ist likely to be highest.

Some models suggest that convective initiation will take place in the 18-00 UTC period across western France. Such activity would be related to the approach of a PV anomaly from Iberia. Given that ample CAPE and 20-25 m/s deep-layer shear should be in place, a severe MCS may result. Because of the high uncertainty at this moment, a mere level 1 is issued for this area.