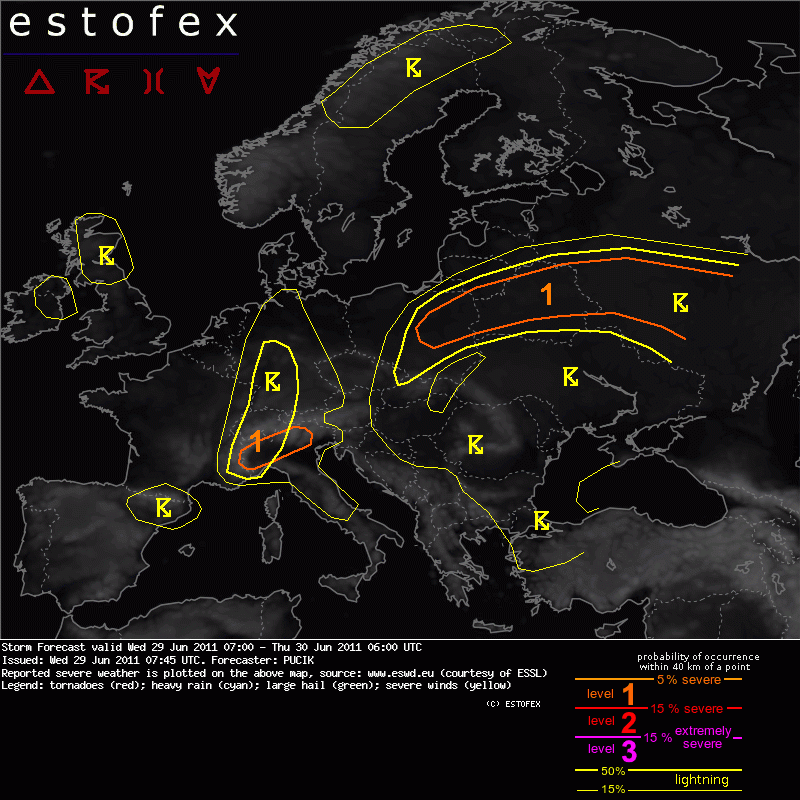 A level 1 was issued for Northern Italy mainly for large hail and severe wind gusts.

A level 1 was issued for Southwestern Russia, Belarus and NorthEastern Poland mainly for excessive precipitation.

At midlevels, a rather complex synoptic scenario evolves with a trough stretching from northern Atlantic across Great Britain, Western France to Northern Iberia, slowly moving eastwards and weakening. To the east, two highs, interconnected by a ridge, will be centered over Northwestern Africa and the Baltics region. Over Southeastern Europe, a cut-off low filled with cold airmass will dominate the weather conditions and with its slight amplification to the west, in conjuction with the trough moving eastwards, the ridge is forecast to weaken. At upper levels, similar situation will prevail with two jet-streams observed - the first one on the forward flank of the trough, bordering with the high and the second one on the south-eastern flank of the cut-off low.

Closer to the surface, the most important factor seems to be a cold front, stretching from Scandinavia into Central Europe. The front should progress across Germany eastwards, but will be relatively stagnant over Northern Italy / Southern France / Northern Spain. Behind the front, a significant ridge of high pressure system is observed.

Good kinematic conditions for well organised storms, including supercells are forecast over this region. Veering of the winds with height should result in enhanced SREH values, locally over 300 J/kg and DLS should be in order of 20-25 m/s. Models do not agree on the degree of instability, which should be marginal to moderate in degree (few hundreds to around 1000 J/kg of MLCAPE). Moreover, high lapse rates resulting from an EML and high LCLs are forecast. Such conditions would probably be conducive to few supercellular storms posing risk of severe hail and wind guss, however, initiation is very questionable as high CIN values are forecast over the region (00 UTC Murcia sounding has CIN over -500 J/kg!) and no strong forcing factor simulated. Therefore, no Level is introduced at the moment, albeit, if storm initiation proves possible (as advocated by some models), Level 1 for large hail and severe wind gusts might be introduced.

As the cold front approaches the Alpine range, moderate to high CAPE values are simulated by all of the models, possibly exceeding 2000 J/kg of MLCAPE. Also, towards the evening hours, slightly enhanced wind shear values are possible over the region. Such a combination of factors, including the forcing factor from the front, could suffice for the development of a few strong multicellular storms with threats of large hail or severe wind gusts (as suggested by enhanced Delta Theta-E values).
The highest threat will likely be observed in the late afternoon and evening hours.

Thanks to the very humid conditions at low to mid-levels in the warm conveyor belt of the cut-off low and low to moderate degree of instability along with simulated dew points possibly approaching 20°C, in conjuction to the weak flow and subsequent slow storm motion, threat of excessive precipitation will exist in this region and Level 1 is issued primarily for this threat. Marginally severe hail might also occur with stronger multicells, especially over the southern parts of Level 1, where the wind shear should be stronger to allow for better organisation of the storms.