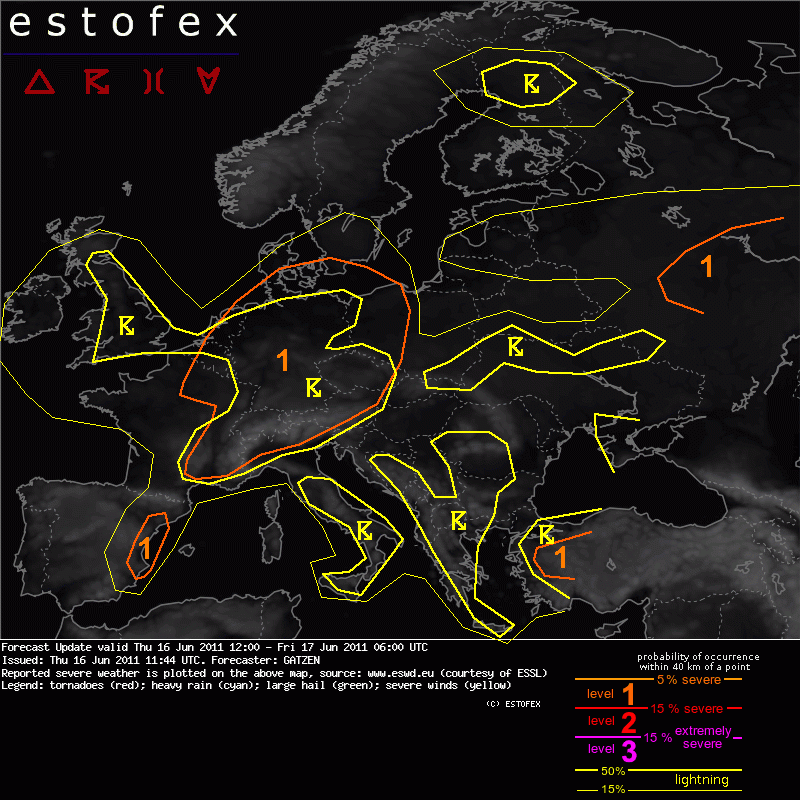 A level 1 was issued for north-eastern France, the Benelux, northern Germany and surroundings mainly for tornadoes.

A level 1 was issued for eastern France, north-eastern Spain, the Alps, south-eastern and central Germany, western Poland, and the Czech Republic mainly for large hail.

A level 1 was issued for western Russia mainly for tornadoes.

A level 1 was issued for western Turkey mainly for large hail.

Ahead of the approaching short-wave trough, a strong mid-level jet streak will spread across western Germany in the next hours. This will be associated with strong synoptic forcing underneath the cyclonically sheared flank over north-western Germany.

Given strong low-level convergence along this front, storms that actually develop will likely merge into a linear system that spreads north-eastward quickly. Latest radar profiles from Brussels and Wideumont indicate stronger south-westerly winds at low levels, so that the low-level vertical wind shear may become stronger than in the models (10-15 m/s in the lowest km). Bowing segments are therefore forecast along the forced line that will pose a threat of severe wind gusts.

Additionally, the tornado threat along this front is also expected to increase over north-western Germany. Rich low-level moisture has developed with dewpoints about 15 C and high relative humidity. With weak surface winds just ahead of the bowing line, stronger low-level vertical wind shear can anticipated due to the strong low-level westerly wind. This will increase the tornado threat along the line as well.

In the wake of the first cold front, another round of storms is possible in the evening hours from the Benelux countries to north-western Germany. Given strong vertical wind shear, severe wind gusts are not ruled out with these storms that will likely decay after quickly sunset.