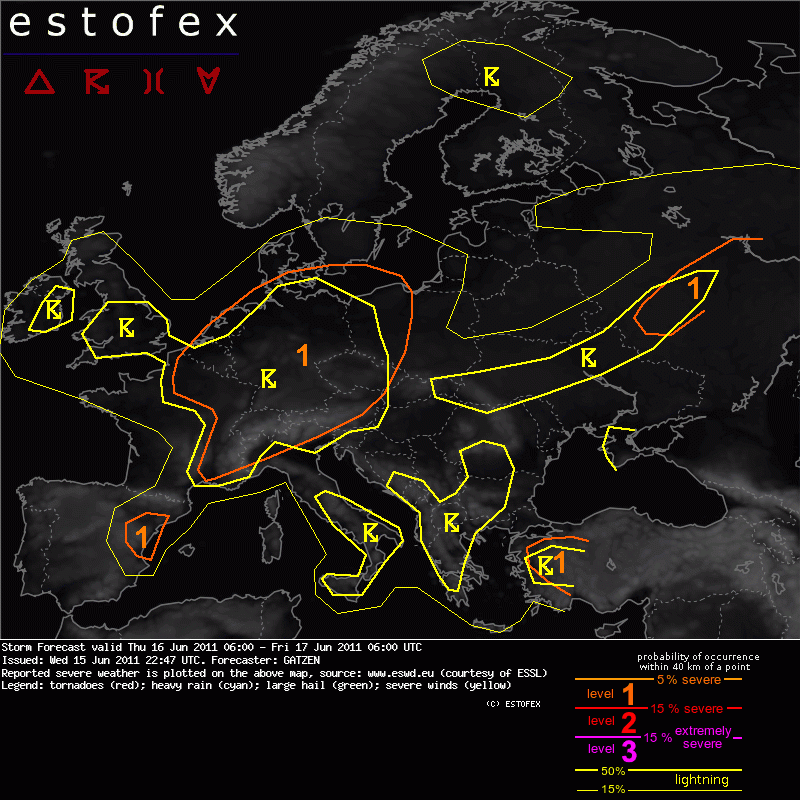 A level 1 was issued for north-eastern France, the Benelux, northern Germany and surroundings mainly for tornadoes.

A level 1 was issued for eastern France, north-eastern Spain, the Alps, south-eastern and central Germany, western Poland, and the Czech Republic mainly for large hail.

A level 1 was issued for western Russia mainly for tornadoes.

A level 1 was issued for western Turkey mainly for large hail.

Polar troughs are placed to the north-west of the British Isles and over eastern Scandinavia. At their southern periphery, mid-level jet streaks will eject into Germany and western Russia. Over southern Europe a weak mid level flow dominates between a ridge in the western and a broad trough in the eastern portions.

The main feature will be a strong mid-level jet streak that extends from northern France into central Germany on Thursday evening. At the surface, a cold front will move from the Benelux and eastern France into Poland, the Czech Republic, and Austria during the period. A tongue of rather warm air will be present ahead of this cold front that advects north-eastward. In the wake of the warm air axis, a relatively strong south-westerly low-level jet will affect France, the Benelux countries, and western Germany with 15-20 m/s 700 hPa winds.

Latest observations and model data indicate that the low-level moisture is limited over most places, with low-level dewpoints around 13 C. Additionally steep mid-level lapse rates are not indicated by latest soundings across France and surroundings. Current thinking is that favourable conditions for thunderstorms can evolve along the frontal boundary and in response to diurnal heating farther south-east on Thursday.

To the west and north of the frontal boundary, only weak cold air advection is expected on Thursday noon/afternoon as the mid-level jet streak approaches. Underneath the cyclonically sheared flank, ageostrophic winds are forecast over northern France, the Benelux countries, and northern Germany. This may result in an increase of the boundary-layer moisture as well as low-level convergence, and showers and thunderstorms are forecast to develop. Given the strong 700 hPa jet and expected backing surface winds, the low-level vertical wind shear may be stronger than expected by latest models. Mesocyclones are forecast capable of producing tornadoes. Severe hail and wind gusts are also not ruled out. The main activity is forecast over north-eastern Germany. Storms will likely decay after sunset.

Farther southeast, daytime heating will likely result in instability from eastern France and the Alps to eastern Germany. CAPE will be most likely along the frontal boundary, where low-level moisture will be highest. Thunderstorms are forecast to develop in the morning and noon hours and will spread north-eastwards during the afternoon and evening hours. Given the strong deep layer vertical wind shear of 20 m/s, storms will easily organize and large hail is forecast with the stronger storms. Severe wind gusts are not ruled out. In the afternoon and evening hours, increasing cold air advection may result in weakening storms. However, storms that form will have an increasing potential of producing severe weather given the increasing vertical wind shear, and a tornado is not ruled out especially in the northern parts.

Over the Alps, storms will likely develop at noon over most places except for the western parts, were storms will start in the morning hours. Given rather high instability as well as increasing deep layer vertical wind shear, a few supercells are not ruled out, capable of producing large hail and severe wind gusts. These storms will likely spread eastwards into Austria and the Czech Republic during the night hours, when severe wind gusts and excessive rain are forecast to be the main threat.

Ahead of the cold front, south-easterly surface winds are expected to develop over north-eastern Spain. This will result in increasingly favourable conditions for organized convection as the low-level moisture will increase as well as the low-level convergence and vertical wind shear. The main limiting factor will be the poor lapse rates at the anticyclonically sheared flank of the mid-level jet streak. However, some storms are expected to develop in the afternoon hours and are forecast to be capable of producing large hail.

Ahead of the eastern trough, a mid-level jet streak spreads into western Russia. Along the cold front, models suggest a frontal wave to form. Low-level backing winds are expected to the northeast of this frontal wave that will likely result in increasing low-level vertical wind shear. Although the instability will be limited given weak lapse rates, storms will likely develop in response to diurnal heating. With moderate vertical wind shear of 15 m/s in the lowest 6 km, some storms may evolve mesocyclones. The main threat is expected to be isolated tornadoes in the region with strongest low-level vertical wind shear.

Near the center of the south-eastern trough, storms will likely develop over Turkey in response of diurnal heating and cool mid-level air. The vertical wind shear will be relatively strong as there will be moderate south-westerly winds at mid levels, and large hail is forecast with the stronger storms. Together with the mid-level jet the potential of severe storms will move eastwards during the period.