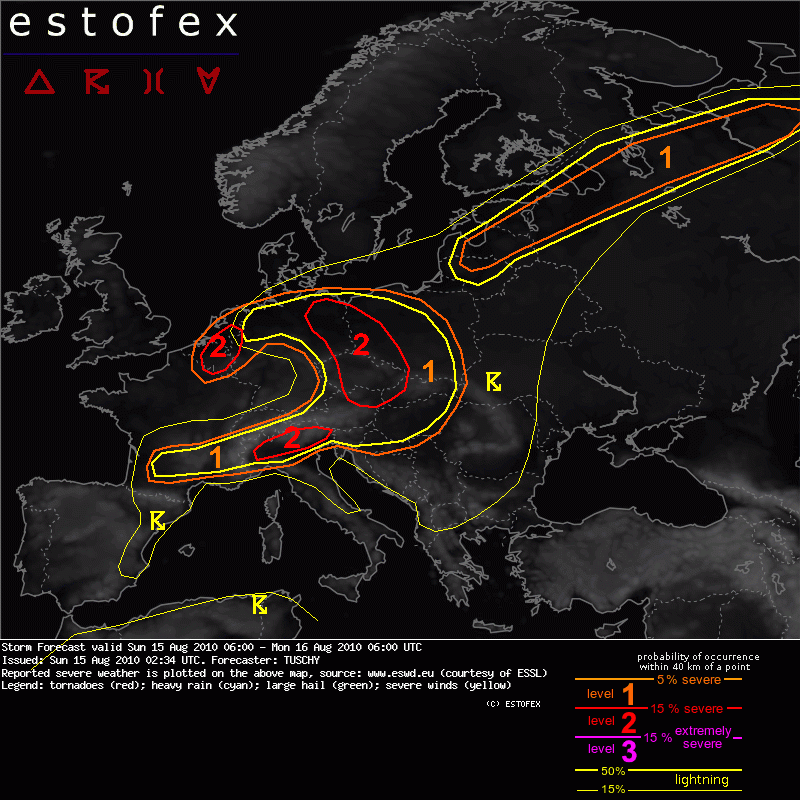 A level 2 was issued for N-Italy mainly for large to very large hail, severe wind gusts and an isolated tornado event.

A level 2 was issued for NE Germany, the Czech Republic, parts of Austria and Poland for all kind of severe, including large to very large hail, severe wind gusts, tornadoes (maximized over NE-Germany) and locally excessive rainfall.

A level 2 was issued for Belgium and the Netherlands mainly for excessive rainfall.

A level 1 surrounds the level 2 areas with a limited coverage of severe events.

A level 1 was issued for Latvia, Lithuania, Estonia and NW-Russia mainly for large hail, severe wind gusts and tornadoes (maximized in the eastern part of the level 1 area).

Busy day ahead with organized convection over parts of Central Europe.

East-west aligned upper trough is placed over that area with a pronounced shear zone in place. Cold thermal low atop warm/moist BL results in modest CAPE with complex shear pattern, locally culminating in 180° shear in the opposite direction. A bit unclear how updrafts evolve in such a kinematic environment, but modest anvil layer shear may cause a few large hail events. Main risk will be locally heavy rainfall with slow moving storms.

Severe risk becomes substantial over N-Italy with roughly 40 m/s anvil layer shear. Advection of moist Mediterranean air towards the Alps beneath mid-level CAA assist in roughly 1000 J/kg MLCAPE with 25 m/s DLS. All this indicates a risk for supercells with large to very large hail and severe wind gusts. Would not be surprised to get an isolated tornado report with major supercells moving eastwards towards the Italian/Slovenian border.

... Austria-Hungary all the way to NE-Germany- northern Poland...

Severe event is shaping up with gradually deepening LL vortex moving from Bavaria to NE-Germany. Air mass over E-Austria, Hungary and Slovakia features unseasonably deep, moist layer with PWAT values peaking at 30-45 mm. This air mass filters northwards as LL vortex intensifies with strengthening LLJ forecast by most models. With modest mid-level lapse rates mixing to the northwest, a broad warm sector evolves with 800 to 1500 J/kg MLCAPE forecast. Kinematic become better throughout the forecast period, so multicells and a few supercells are forecast. A key ingredient for long-lived mid-level updraft rotation is a broad backing wind field along the N/NE fringe of the LL vortex. LCLs over NE-Germany remain low with intense backing forecast depending on the strength of the surface vortex. Would prefer to see stronger CIN values during the afternoon hours for more discrete initiation, but overall, conditions for tornadic supercells are good to say at least. Severe wind gusts and large hail accompany those storms. LCLs increase towards Austria with regionally augmented directional shear and better DLS, so large to very large hail accompanies thunderstorms mainly during the initiation stage over N/E-Austria and the Czech Republic. Severe wind gusts and heavy rain will be another hazard. Would not be surprised to see another round of an long-lived MCS, as strong PVA maximum enters the Alpine area from the west. E-Austria to Poland look most promising for that scenario. Heavy rainfall risk and severe wind gusts being the main hazard.

The level 2 was placed along overlapping jet axis/moisture axis and CAPE tongue, where highest coverage of severe / isolated extremely severe is forecast. Level 2 over NE-Germany is a bit uncertain due to variations in LL vortex strength and weak CIN values, but overall set-up supports organized convection.

Serious rainfall risk may evolve with gradually deepening vortex and evolving deformation zone just over Belgium and the Netherlands. Inflow into this deformation zone features deep and very moist air mass with intense lift. Prolonged period of near quasi-stationary conditions of strongest convergent flow and aforementioned air mass quality rise the concern of widespread excessive rainfall. It's not yet clear, where strongest banding occurs, so the level 2 is still quite coarse. New model data may increase confidence later-on, where highest rainfall amounts occur.

A few large hail and severe wind gust reports are forecast along the extensive moisture confluence zone over extreme NW-Russia westwards. A few tornado events are possible in the eastern part of the elongated level 1 and even an isolated significant tornado event can't be ruled out.