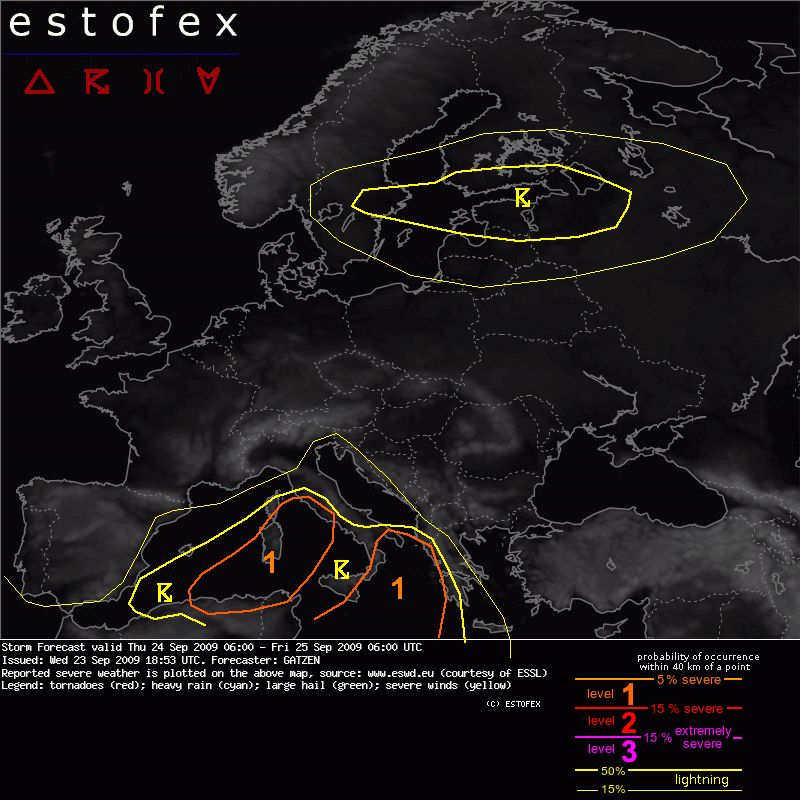 A level 1 was issued for the southern Mediterranean mainly for excessive rain.

A broad high is present over the north-eastern Atlantic. It ridges into Iceland and the British Isles. Downstream, a polar trough moves eastward over Scandinavia and western Russia. The associated low-level cold air advection affects a large region from northern France to eastern Europe. Further south, rather warm air is present, but northerly winds have lead to stable conditions over most places given relatively weak low-level moisture except for the southern and western portions of the Mediterranean. A weak cut-off low centred over northern Tunisia will be the focus of deep convection over Europe.

In the range of the cut-off low, models agree that instability will remain due to rather steep mid-level lapse rates and rich boundary-layer moisture exceeding 12-13 g/kg in the lowest kilometre. In the range of a surface low-pressure system north of Algeria and Tunisia, low-level convergence is expected through-out the period and will likely assist for deep convection that is expected to go on especially along of boundaries created by convective outflow or land-see-breezes. Given the weak vertical wind shear, organized convection seems to be not likely, although mesocyclones are not ruled out. However, given the slow propagation speed of the convection and the rich low-level moisture, some storms may be capable of producing excessive rain.

To the south-east, the forecast area may be slightly affected by a mid-level jet streak that travels around the trough. Over the southern Adriatic and Aegean Sea, 500 hPa winds may increase to more than 20 m/s in the afternoon and evening hours. Although low-level convergence is rather weak, thunderstorms are not completely ruled out due to some QG forcing and may evolve into mesoscale convective systems spreading eastward. Excessive precipitation and locally large hail are not ruled out with these storms that may reach Crete late in the forecast period.

At the southern flank of the Scandinavian trough, a short-wave trough moves eastward across the Baltic Sea. QG forcing is likely and models indicate a tongue of slightly warmer low-level air spreading eastward ahead of the associated mid-level jet streak. Additionally, relatively humid low-level air is advected north-eastward ahead of a surface convergence underneath the trough axis. This will likely be associated with some convective instability building from southern Sweden across the Baltic Sea into the Baltic States. While deep convection will likely develop in the morning hours underneath the trough centre, where weak vertical wind shear will be present, another round of deep convection may develop at noon over southern Sweden and spread eastward. Ahead of the trough axis, models agree about a 20 m/s jet streak at the 850 hPa level and associated 10 m/s low-level vertical wind shear. Mesocyclones are expected to develop given 100-150 m²/s² 0-3 km storm-relative helicity ahead of the convergence line. As the low-level buoyancy will be rather strong as the cold air masses spread across the relatively warm sea surface, tornadoes are not ruled out. Limiting factors are the rather weak low-level convergence, low-level vertical wind shear, and moisture content, and the threat seems to too quite low for a categorical risk.