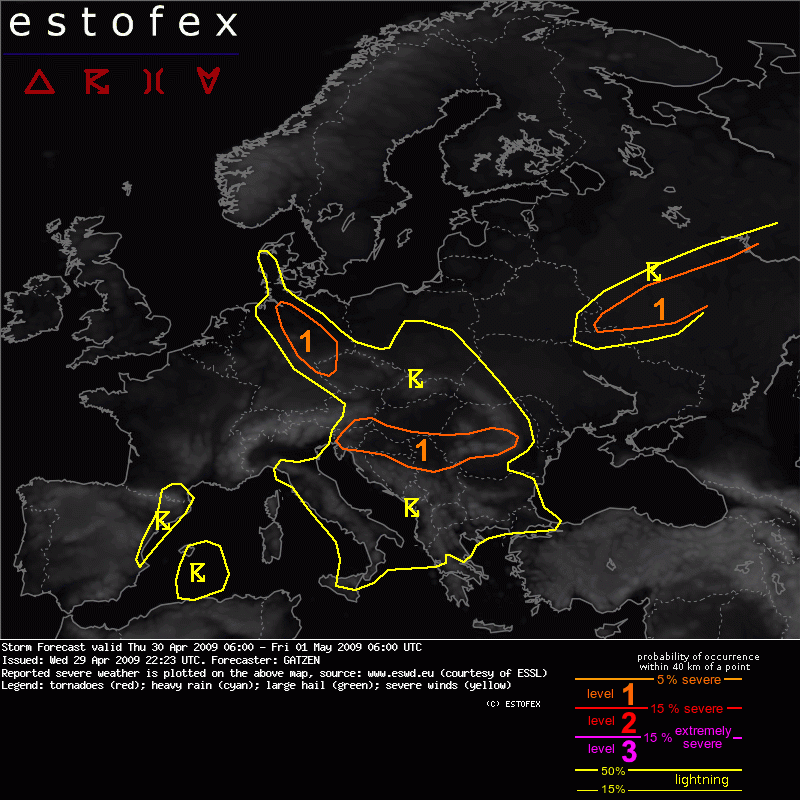 A new ridge builds as rising geopotential is forecast from south-western Europe to the Baltic Sea. A low pressure system centred over France and the British Isles will be cut into a northern trough and a southern, merging to long-wave troughs to the north-west of the British Isles and over south-eastern Europe. While rather cool air masses dominate most of western and southern Europe, a tongue of warm air mass is situated from the southern Baltic Sea to the northern Balkans and Ukraine.

To the north of the trough centred over south-eastern Europe, rather warm air masses are situated over eastern Europe that are expected to spread further south-westward in the wake of the trough. Latest soundings indicate steep lapse rates in the lowest 3 km, while low-level moisture is poor. Best moisture pooling is expected in the range of the warm front over the northern Balkans, where sufficient instability may develop in response to diurnal heating. Cloud coverage will be the greatest forecast uncertainty.

Current thinking is that storms will develop especially over the northern Balkans. The chance of severe convection will gradually increase from the north to the south, as vertical wind shear will be strongest in the range of the warm front, where favourable veering profiles will also be present. Expect a couple of mesocyclones, chance of large hail seems to be high enough to issue a level 1 from northern Bosnia to Hungary and further into western Romania. With isolated storms, a tornado is not completely ruled out as low-level buoyancy and relative humidity may be favourable near the warm front. Severe potential will rapidly decrease in the evening hours as forcing and instability will decrease.

A frontal boundary is present over Germany. On Thursday, a weak upper trough is forecast to move westward across central Germany at the southern flank of the strengthening high over the Baltic Sea. At lower levels, increasing easterly winds will advect warm air masses characterized by steep low-level lapse rates into eastern Germany during the period. Along the warm front, models agree that moisture pooling will increase CAPE during the day.

Given low-level convergence and QG forcing in the range of the mid-level trough axis, thunderstorms will likely develop in the range of the warm front. As drier air is forecast to spread into north-eastern Germany, instability will decrease gradually in the afternoon and evening hours from the east. While most storms may be quite weak due to weak vertical wind shear, storms that form near the boundary may become organized in the evening hours when the easterly low-level jet intensifies. As the wet-bulb zero is low, large hail seems to be the main threat with these storms, and a few events of severe hail are forecast. Severe wind gusts are not ruled out given the possibility of large downdraft CAPE at the dry flank of the front.

Increasing advection of low-level dry air masses is expected in the evening and night hours, limiting the potential of storms from the north-east.

Along a cold front moving southward during the period, storms are expected to develop as some CAPE will likely develop due to low-level moisture pooling and steep low-level lapse rates. Well-mixed warm air mass and dry low-levels are forecast to increase the chance of isolated severe wind gusts and large hail. Storms will weaken after sunset.

The most important synoptic feature is a low analyzed across France on Wednesday. The associated mid-level jet streak is forecast to spread into southern Italy and Greece on Thursday. In the range of the low, rather cold mid-level air masses will cross the region, while slightly drier low-level air mass spreads eastward. As a consequence of the weakening low-level moisture, instability release becomes more unlikely especially over the Italy region. The best potential seems to exist over the southern portions of Italy as well as over the Aegean Sea, where moist low-level air mass is expected above the sea surface. Given rather cool air masses at the 850 hPa level, rather steep low-level lapse rates are likely in the range of the trough center.

On Thursday morning, weak cold fronts are forecast to move into the Balkans and Greece, advecting slightly drier low-level air mass eastward. The chance of thunderstorms is rather low in the morning hours over most places. During the day, diurnal heating will likely cause steepening low-level lapse rates in the range of the cool air mass, resulting in showers and thunderstorms across central Italy and the Balkans. Limiting factor will be rather poor low-level moisture and associated weak CAPE as well as relatively weak low-level convergence and vertical wind shear. Severe storms seem to be not likely.

As the trough moves on, steepening lapse rates and CAPE will likely build further south-east across the southern Adriatic region during the afternoon. Given more substantial boundary-layer moisture, as well as stronger deep layer vertical wind shear in the range of the mid-level jet streak, intense convection becomes more likely, but weak low-level convergence and forcing will likely suppress widespread convection. Isolated storms that form bowing segments capable of producing severe wind gusts are not ruled out.

Late in the period, the trough axis is forecast to move to Greece and the southern Adriatic. Steep low-level lapse rates and nearly neutral profiles in mid-levels as well as some moisture over the rather warm sea surface will likely result in mostly weakly capped CAPE. Given some QG forcing at the cyclonic flank of the mid-level jet streak, deep moist convection is expected from southern Italy to Greece. As vertical wind shear is quite strong, some intense updrafts are not ruled out. Limiting factors are weak low-level forcing and nocturnal weak low-level buoyancy over the land. Severe wind gusts and large hail seem to be not likely enough to warrant a risk level.

Ahead of an approaching trough axis, south-westerly winds are forecast over the Iberian Peninsula, and elevated mixed-layers may advect over the west Mediterranean in the evening and night hours ahead of a cold front. Along and ahead of the trough axis, thunderstorms are forecast to develop over the west Mediterranean spreading south-eastward. With relatively weak vertical wind shear and stable low-level air mass, the storms are not expected to be associated with severe weather.